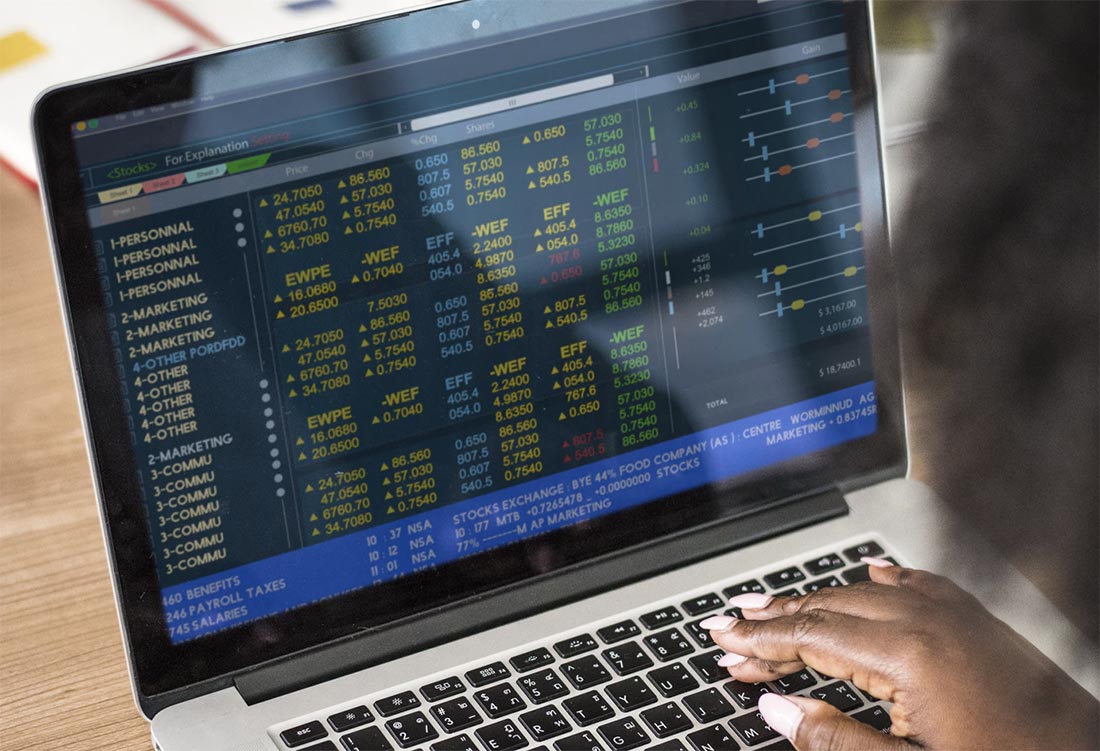 Future of Cryptocurrency and Trends 2019

Write to Eugene
Merehead / Blog / Trends / Future of Cryptocurrency and Trends 2019
Subscribe to our newsletter
You are the rock.
Thank you!

Cryptocurrencies are developing rapidly. The constant growth of Bitcoin and other digital currencies is constantly increasing public interest in them. Both institutional and retail investors are increasingly investing in cryptocurrency.

The decentralized control of each cryptocurrency works through Blockchain - an open transaction database that functions as a decentralized book (one page here, the other there, the third somewhere else). Experts predict that by 2021 the volume of the technology market will grow to more than $2 billion. The amount of information on innovative technologies as of the fourth quarter of 2017 amounted to more than 300 gigabytes. The world's largest companies using blockchain technology are: Circle Internet Financials, Coinbase, 21 Inc., Ripple, BitFury Group, Blockstream, and Digital Asset Holdings.

Cryptocurrencies, as a strong instrument with high returns, have aroused great interest among investors. The number of users of Coinbase, one of the leading cryptocurrency exchange platforms in the United States, increased from 0.4 million in January 2017 to 4.3 million by December 2017.

However, despite all the bans of governments, negative analyzes of international banks, cryptocurrencies are doing fine, especially Bitcoin. The future of the cryptocurrency market has great prospects as well as other options and directions in digital art like graphic design in 2021 or logo design trends 2021. Let's look at the most promising cryptocurrency trends in 2019.

Bitcoin is the leading cryptocurrency on the market. It is rapidly moving, reaching new heights every few days or weeks, thereby increasing its popularity. Since the demand for it is high, many exchanges sell bitcoin.

In December 2017, the value of Bitcoin exceeded $20,000, and even those who were not interested in cryptocurrency thought about investing in it. Experts have announced a big future for virtual coins. Many of them announced positive forecasts about Bitcoin for 2018, guaranteeing future price increases, thereby increasing interest in mining cryptocurrencies and the possible recognition of such electronic money in different countries.

However, in the beginning of 2018, something unforeseen happened - the course collapsed sharply. By early February, the value of BTC fell below $7,000. Despite the slight jumps, the price of a virtual coin was affected by a bearish trend, which seriously disturbed both potential and current investors. By mid-summer, the price leveled off, and in July 2018, finally, a bullish trend prevailed. Now Bitcoin capitalization is 110.4 billion dollars. 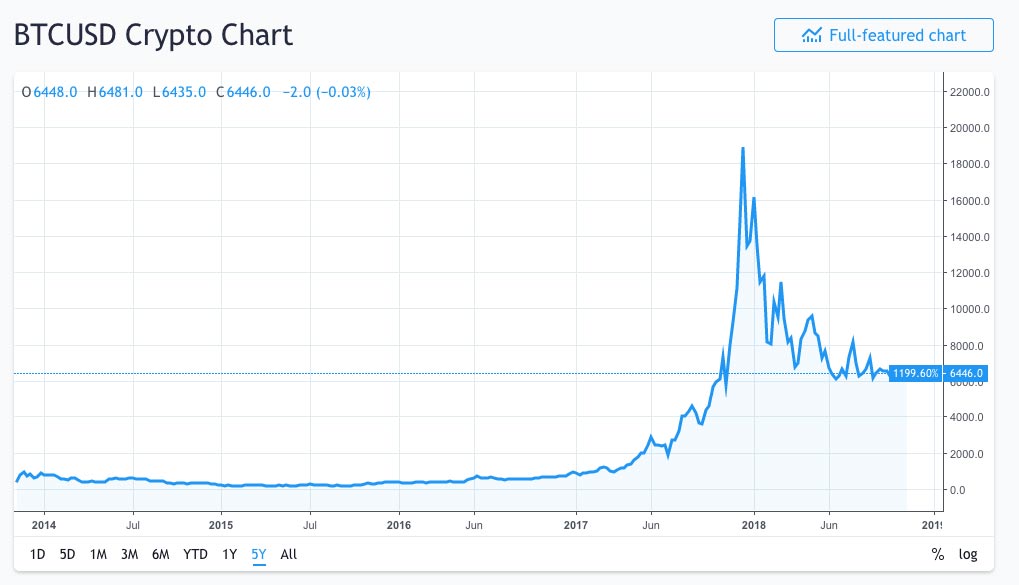 According to Saxo Bank, the price of Bitcoin will exceed $45,000, but at the end of winter the currency will collapse, and the cost of one coin will not exceed $1,000.

Masterluc, a well-known trader, promises that the price of cryptocurrency will pass the mark of 90,000 dollars.

The implementation of the coin in 2019 will be much more intensive than in previous years, as well-known brokerage companies such as Robinhood began to support operations with this currency.

Ethereum has unique capabilities compared to bitcoin. First of all, it is a platform, not a digital currency like Bitcoin, which works on smart contracts. On this platform, the functions of the application are similar to the programmed functions, that is, without the intervention of third parties, fraud, and so on.

Ether (cryptocurrency based on Ethereum block changers) is based on smart contracts. These contracts are perfect for any online wallet that uses the standard coin API.

In 2014 Ethereum took second place in terms of the amount collected through crowdfunding. The size of the Ethereum blockchain as of the end of May 2018 exceeded 350 GB. In January 2018, the cost exceeded $1,300 for 1 Ether, and in September dropped to $200. 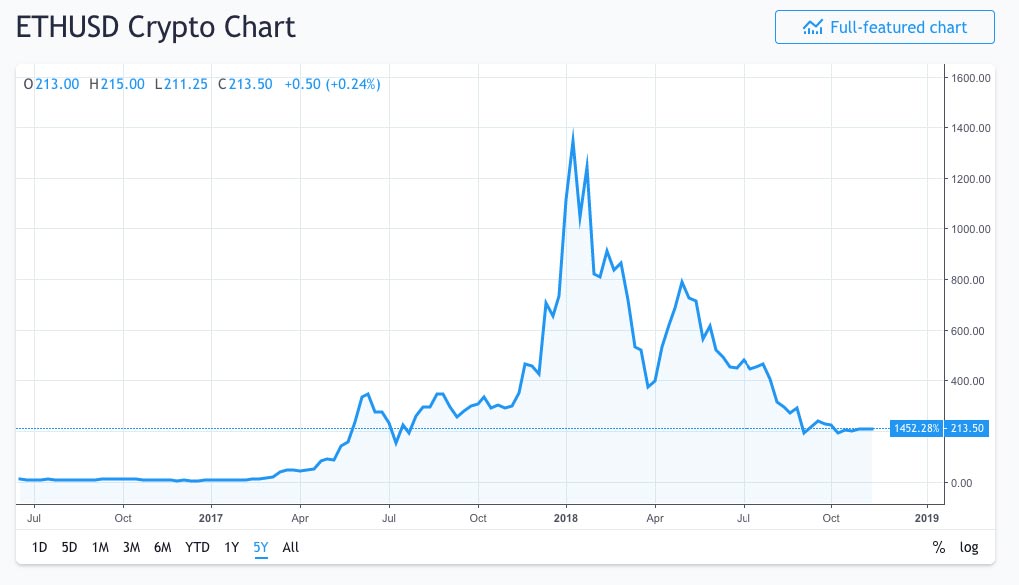 Although the Ethereum blockchain is the second most popular in the cryptocurrency industry, it actually has several issues regarding scalability.

Scalability is the number of transactions that a blockchain can handle per second. Ethereum is able to process only 15 transactions per second. In the early days of the project, this was not a problem, since not many people used it. However, since over time Ethereum became more popular, scalability became the biggest problem present with the Ethereum blockchain. To give you an idea of how big the problem is, the NEO blockchain can process up to 10,000 transactions per second. If Ethereum developers do not solve the problem of scalability, organizations may consider using other blockchain technologies to host their smart contracts and dApps instead of Ethereum.

If organizations begin to abandon this technology, the price of ETH will drop abruptly, so this issue is of paramount importance. Fortunately, the Ethereum developers are fully aware of this problem, they are in the process of making significant changes to the technology.

According to forecasts of independent analysts, the cost of Ethereum in 2019 implies a twofold increase in quotations. Experts expect fluctuations in the cost in the near future within 1000-1500 USD/ETH. The most optimistic scenario provides for a rise in price of cryptocurrency to 2500-3100 dollars.

At the moment, EOS is just beginning to develop, this cryptocurrency has not yet had time to gain potential.

EOS is a framework for decentralized applications that facilitates transactions using intelligent contracts. This ensures maximum trust and transparency throughout the decentralized exchange.

EOS software allows you to integrate Blockchain technology, which helps to better scale decentralized applications. In addition, it provides a new database, account, authentication, and other functions in different CPU cores, allowing you to perform millions of transactions per second. EOS also helps eliminate user fees and simplifies the deployment of decentralized applications. 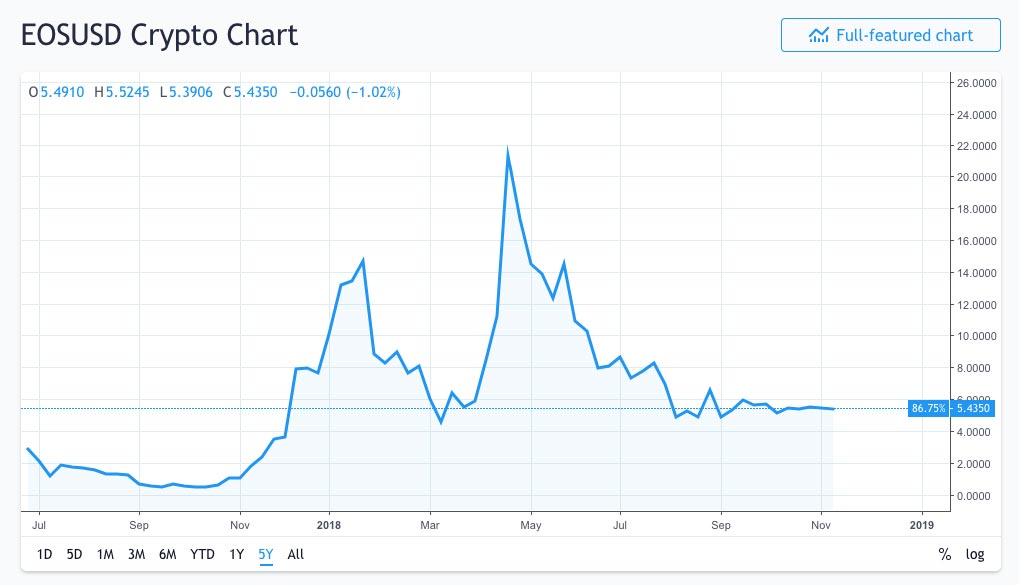 EOS allows Ethereum developers to copy and paste their projects into the EOS network. This allows simple Ethereum-based projects to switch to new technology.

EOS retained first place in the latest ranking of public blockchain projects issued by the Chinese government. Already during the third month, EOS retains its first place on top of the rating.

Some of the key features of the platform are: accounts, authentication, databases, asynchronous communication, application planning on hundreds of cores or CPU clusters.

According to forecasts of independent analysts in early 2019, the price of 1 token will be 20-30 dollars, after a second jump in the first half of the year - up to 50 dollars. By December 2019, $100 per token is expected, without subsequent changes in the exchange rate.

Litecoin is one of the oldest cryptocurrencies that has one of the largest market capitalizations. Litecoin was created in October 2011 by Google’s former engineer Charles Lee. He worked at Coinbase from 2015 to 2017.

This cryptocurrency has peer-to-peer access, it provides almost zero commission in any part of the globe. Litecoin is useful for everyday shopping. Because of the low price, Litecoin is the best option for young investors who want to enter cryptospace. 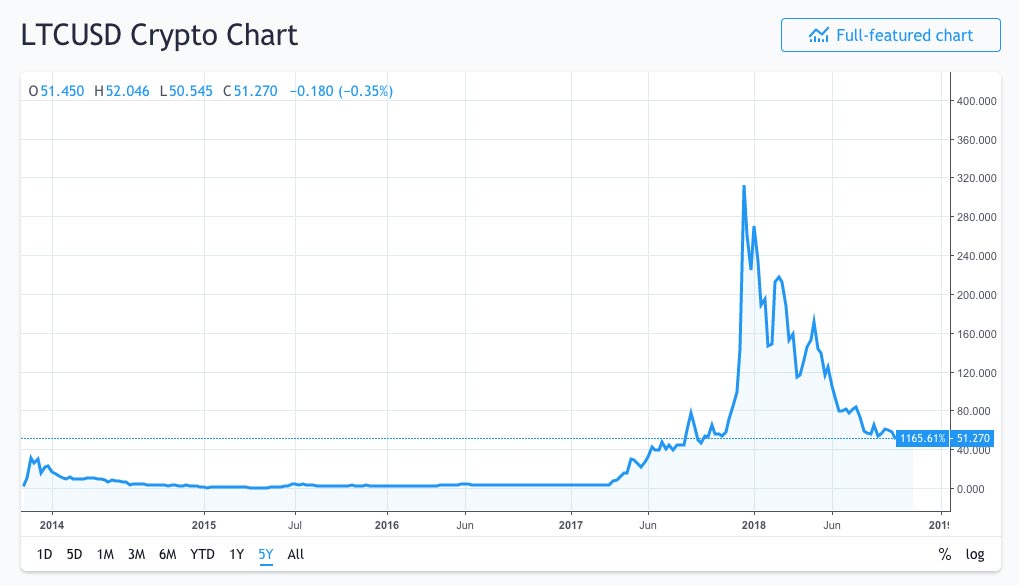 The Litecoin algorithm allows you to create 84 million Litecoins. This is 4 times more than the same Bitcoin, which reflects the 4-fold advantage of speeding up transactions.

Ripple is a unique cryptocurrency and the best solution for corporate problems. This technology facilitates the exchange of digital assets, global payments, connecting banks and payment providers.

Since Ripple is the most affordable cryptocurrency, it can boast a simple and affordable transaction system.

A large number of banks from around the world are actively working with Ripple to implement their technologies in the payment infrastructure. This makes Ripple a more attractive technology, investors believe that XRP is a relatively safe currency compared to other cryptocurrencies.

In 2017, the XRP price rose rapidly during the first half of the year. Investors interested in digital currencies, like in the safe havens for their assets in the long run, consider Ripple as the ideal option. 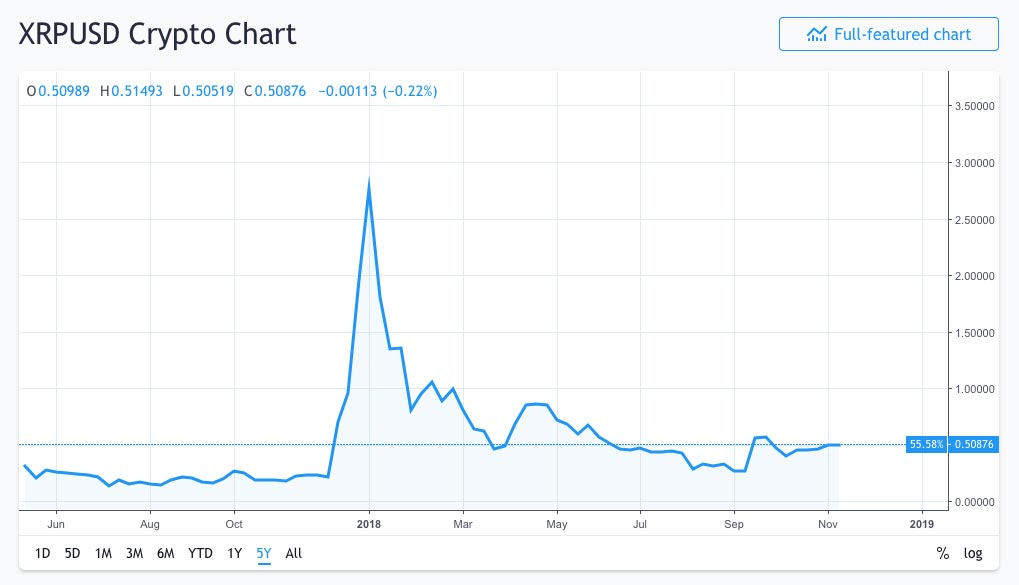 Analysis of the international analytical center states that Ripple will capture 30-50% of bank transfers in the next 3-5 years, in 10 years it will completely replace SWIFT. Unlike Blockchain trends, it is much easier to work with Ripple, it is easier to implement it into the system.

If the technology continues to be actively integrated by banks, the XRP rate in 2019 will exceed 5-7 dollars, and capitalization will rise above the level of Ethereum. Today, the difference in this indicator between Ethereum and Ripple is 19 billion dollars. With increasing Ripple trends, it’s easy to overcome this difference.

"Ripple" is one of the most famous technologies, combining the financial and cryptocurrency worlds. The company has signed several international agreements with international banks to introduce their technology into their work. The company has proven that the use of cryptocurrency can save banks from millions of losses. Most analysts are confident that in 2019 banks will invest in crypto technology much more than in previous years.

The new partnership agreement between Microsoft, Starbucks and ICE (International Exchange) is just one sign that retailers are ready to accept cryptocurrency as a payment method. It should be noted that Starbucks customers now pay for coffee by Bitcoins.

Just as companies can raise money for a service platform, selling cryptocurrency, so can a game development company or cryptocurrency development. Games built on blockchains and using tokens as an in-game currency are just one of the ways in which critocurrencies increase their popularity and accessibility. Innovative companies create decentralized markets where items from a variety of online games can be bought and sold using cryptocurrency. The peak of development of this sphere is forecasted for 2019, which marks the rise in price of cryptocurrency.

We can confidently say that the cryptocurrency market will develop vigorously in 2019. Already, most crypto asset prices are rising compared to last year. Considering market trends, the phase of “despair” and the bubble pattern that have been chasing the market over the past half year, the market is waiting for a change in trend. The integration of new technologies into banking systems, for example, Ripple, will also affect the change in the cryptocurrency rate.

Merehead does professional development of cryptocurrency trends 2019. If you have questions, contact us for a free consultation.

Eugene Tarasenko
Author of the post
Merehead is a development company

Category: Trends 01/06/2023
Bitcoin Price Prediction 2021
The first cryptocurrency has already surprised modern businessmen many times. Now the question is whether the new surprise for innovation lovers will be pleasant and whether it is worth expecting a price increase from this "coin". 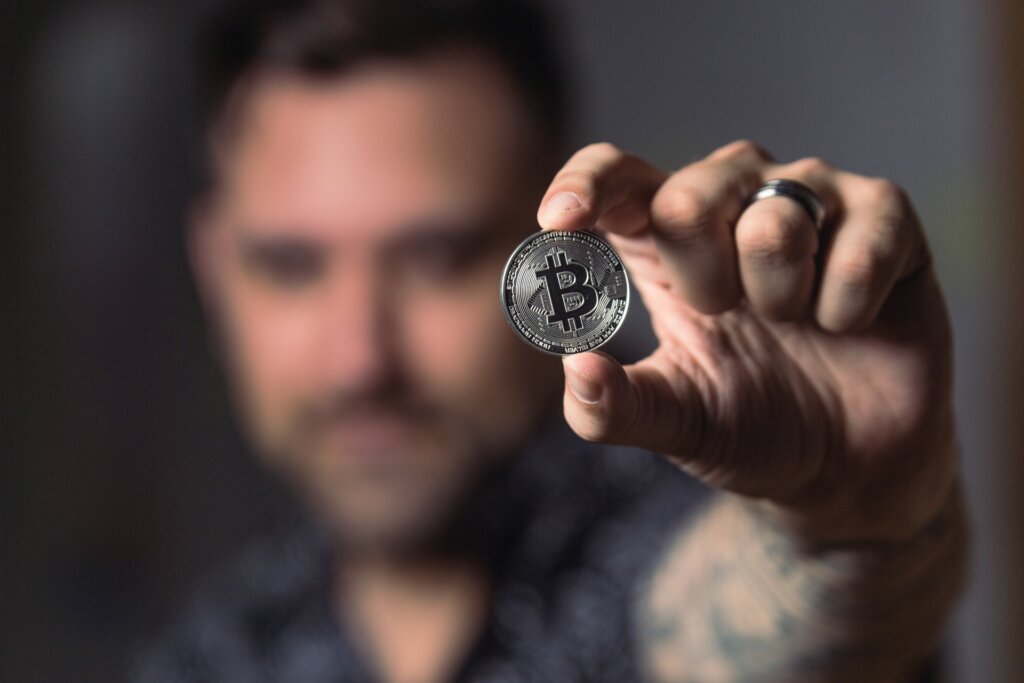 Category: Trends 01/09/2023
Bitcoin Price Prediction in 2022
Bitcoin is the first cryptocurrency, initially, it was created to replace fiat and was intended to destabilize the traditional financial system. Bitcoin is a pioneer in the field of cryptoindustry, many other cryptocoins have been developed on its basis, and even more will be formed. The cryptocurrency was created to be available to everyone, regardless of the region of residence and social status. Even now the cost of one bitcoin is more than 60 thousand US dollars. Although even a year after its creation, its price barely reached $1. 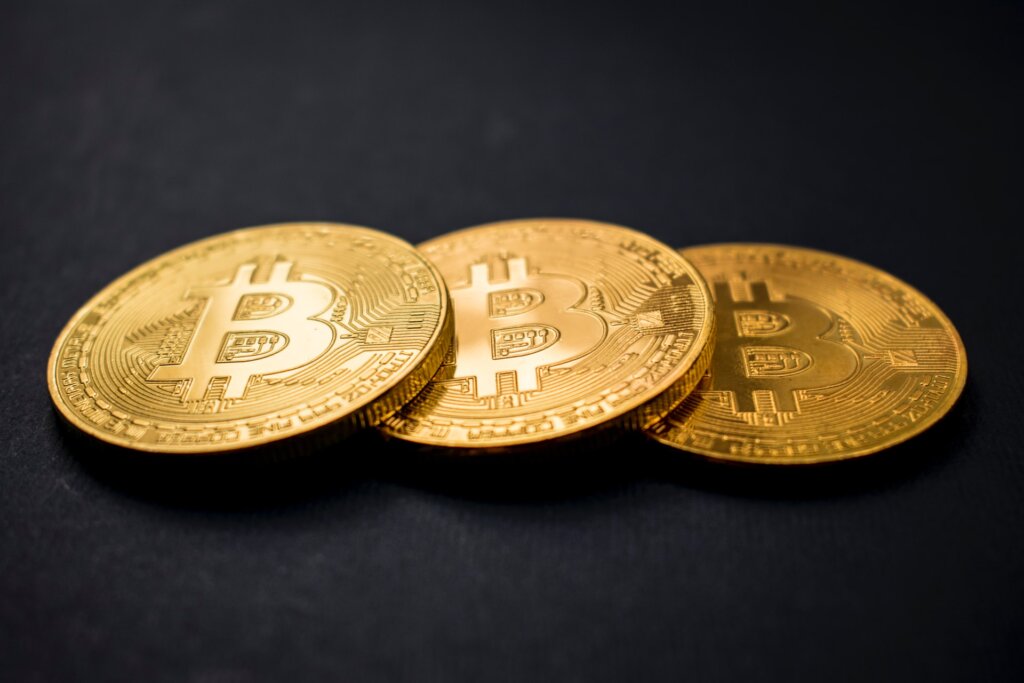