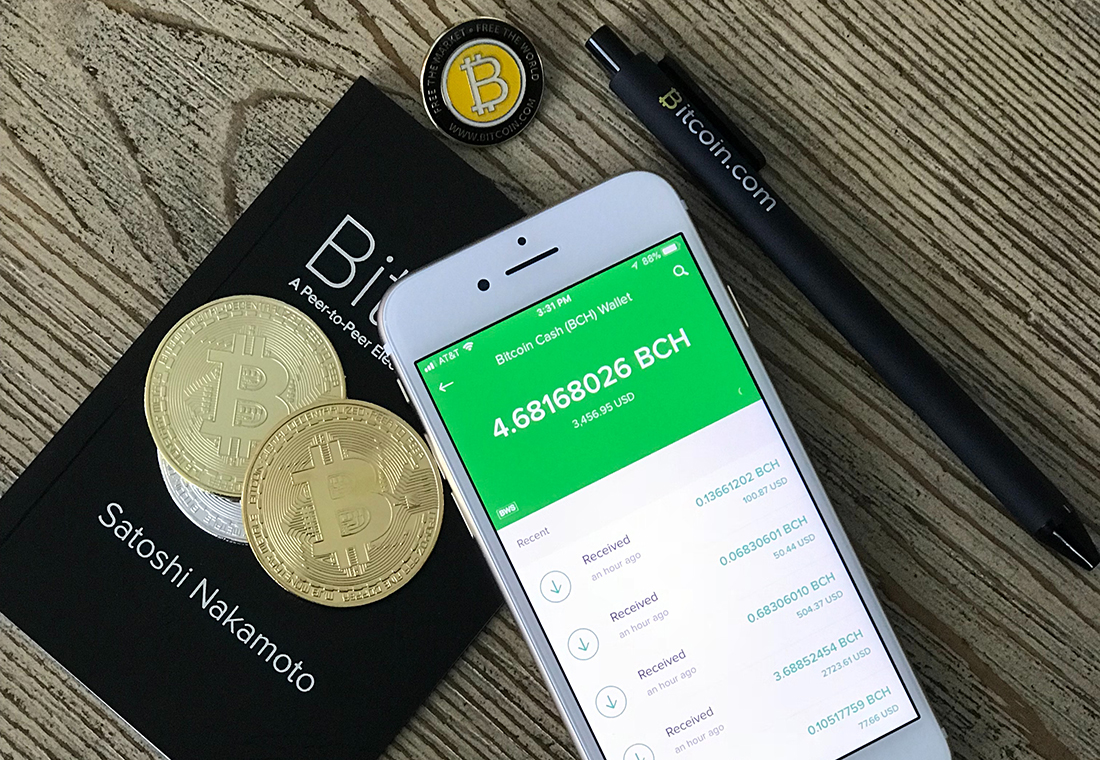 Write to Yuri
Merehead / Blog / Trends / Cryptocurrency (Bitcoin) Price Forecasts Trends and Predictions for 2020
Subscribe to our newsletter
You are the rock.
Thank you!

The rush around the cryptocurrency trend has passed, the bubble has burst and prices have reached a logical level for the development of this industry. But interest in digital money is growing. Against the background of last year’s boom, many believe that cryptocurrencies are dying out. In fact, they develop at a pace that was originally expected.

Indestructible, Bitcoin takes first place. Based on its indicators, the situation in the entire market is built. Therefore, first of all I want to talk about the predictions of this particular cryptocurrency.

Nevertheless, altcoins are developing every year. Some even "breathe in the back of Bitcoin", if you follow the statements of experts. BTC and ETH are not really the only favorites. The market is constantly changing, supplemented by more and more interesting projects. Therefore, I will not be able to miss some promising cryptocurrencies, and I will talk about them after Bitcoin.

Many events have a strong influence on cryptocurrency quotes. Therefore I want to draw your attention to a few news, after which prices have risen. What's important, this news has created a foundation for the future market.

One of the most important incidents, as for me, is the addition of Bitcoin и Ethereum indices to the Nasdaq exchange. If you track the graphics Coinmarketcap, BTC quotes then rose by $ 300.

A small analysis makes it clear that often quotes follow the predictions of people with authority in the market. For example, John McAfee said that by the end of 2017, Bitcoin will reach $ 5,000 - this is what happened. But then the figures did rise to $ 20,000.

In his Twitter, John said that he was mistaken with some predictions. So, he said that by the end of 2020 the cost of BTC will reach 500 thousand dollars. But now he predicts the whole million. I doubt such growth. But John McAfee’s reputation in the cryptocurrency market is definitely higher than mine. Maybe not up to a million, but Bitcoin can grow several times by the end of 2020. 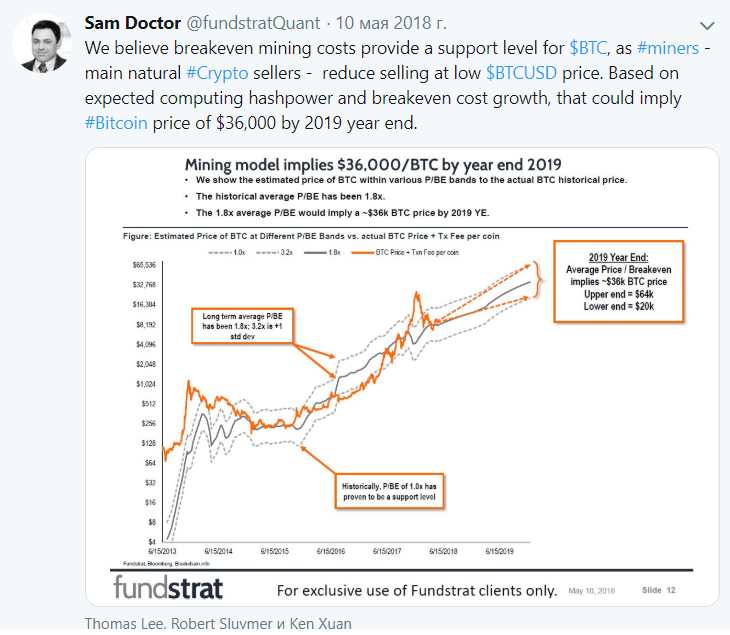 Prediction from Sam Doctor. Source of the image

At the same time, Tom Lee, a former analyst at JP Morgan, and now co-founder of Fundstrat, believes that the current fair price of BTC is $ 14,800. But it will grow to $ 150,000 as soon as the number of Bitcoin wallets is 7% of the number of Visa card holders (today it is 4.5 billion people).

Galaxy Digital founder Mike Novogratz is one of the opponents of such optimistic forecasts. He is confident that, at best, Bitcoin will reach $ 9,000 by the end of 2019, and throughout 2020 it will not exceed $ 10,000.

Nevertheless, Mike thinks that this is a slight lull and predicts growth above 20 thousand. In his opinion, the cryptocurrency market will grow very slowly, but surely.

BTCC CEO Bobby Lee and his brother Charlie Lee (the creator of Litecoin) are paired up with forecasts similar to those of past years. However, now the range is several times wider. For a start, they are confident that Bitcoin will fall below $2,500, but will increase to $ 333,000 by the end of 2020. The next few years will be characterized by a decline to $41,000, and the next growth can be expected not earlier than 2023.

However, among other famous people, Musk does not give accurate predictions about Bitcoin and the entire market. He is only confident in his growth.

Most expert predictions are like random numbers. Looking at the current situation, it is hard to imagine that just in a year Bitcoin will grow to hundreds of thousands of dollars. In the summer of 2018 there were forecasts for growth to $ 50,000 by the beginning of 2019, but the situation was different. A noticeable increase in quotes was only in February, which is associated with the addition of cryptocurrency on the NASDAQ.

My opinion is not expert: by the beginning of 2020, the maximum that we can see is 10-12 thousand dollars. The current situation on the market contributes to this forecast, in which BTC is growing inexorably slowly, while the rest of the cryptocurrency is in no hurry to reach for it.

The community is divided into “support” and “opposition” to Bitcoin. Each side has strong arguments to confirm their positive or negative forecasts, respectively. What if you consider a medal from two sides at the same time?
So, Bitcoin was created back in 2009 in order to speed up payment transactions and reduce commissions. Did you realize the idea? At first, yes.

The Bitcoin network has been successfully used by many companies to transfer funds around the world. Later - no. It turned out that the network is not designed for scalability, because it is not able to handle a large number of requests. The result is huge delays and commissions of 40+ dollars.
Next, there was the introduction of Segregated Witness technology, which significantly increased network bandwidth. Result on the face: today the average commission per transaction in BTC is one and a half dollars.

The Bitcoin network is very inferior in speed to many projects, like Ripple, Ethereum, Dash or Monero. But the developers were able to partially solve the problem of scalability. Accordingly, they know the future direction of development. One of the most anticipated updates is Lightning Network.
Based on this analysis, we can conclude that the network will be more stable, which means it will be in demand. Accordingly, quotes can grow.

What cryptocurrencies can not be overlooked? What to add to your investment portfolio by 2020? These questions are asked by many users. The last 2-3 years, the answers have not changed. But today you can sow small doubts.

I will begin with doubts. Ethereum for a long time occupies the second line of the Coinmarketcap rating. We all know that it was positioned as the fastest network that can handle any load. But every year this statement is denied more and more.

The fact is that on Ethereum blockchain a lot of projects are being created that relieve part of their load on the main network. In the future, this may significantly affect the quotes. But instead of creating abstract guesses let's turn to the opinion of experts. 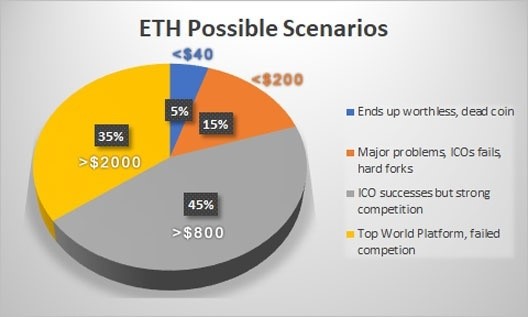 Possible scenarios for the development of Ethereum. Source of the image

For a long time, ETH was much better than BTC in performance. Let it not managed to catch up with the quotes of the “first cryptocurrency”, but the status was impressive. Today, these two cryptocurrencies have almost the same situation. And at ETH, the future is largely dependent on the implementation of Raiden Network.

Very promising and fastest network today. Users argue a lot about whether Ripple can be called a cryptocurrency? But today it is in the lists of ratings, based on the principles of the blockchain, and the transactions are a bit similar to the same Bitcoin (many differences create the absence of mining).

About 50 global banks and large organizations have established cooperation with Ripple. This pushes the idea that XRP can grow by 1000 percent. After all, it is supported by those who are fighting with whole crypto market-banks.

Comparing Ripple and Swift. Source of the image

Well, the Ripple is really a very stable coin. While the entire market was plummeting, XRP quotes remained almost unchanged, and even grew due to another partnership. But Ripple can really "blow up the network" only when ousting Swift. When it will be? One can only guess, since both technologies are not standing still.

This platform has become one of the best discoveries of recent years. Many investors confidently say: “If you don’t know where to invest money - stop at EOS - you will not make a mistake”. The whole world is waiting for how EOS will become the basis for many enterprise applications. So, if we can see the transition of Uber, Twitter or Facebook to a decentralized platform - it will be EOS.

This platform easily handles scalability. Ethereum projects can also be transferred to EOS, which increases its status. 2020 may be golden for this platform. With the development of the market quotes can grow to $ 100, which is a gain of 1900%.

This cryptocurrency is the main opponent of Ripple. Stellar was created due to the disagreement of some members of the Board of Directors with the Ripple strategy. Thus, it has similar tasks. However, Stellar has its own, decentralized protocol, ensuring the anonymity of users. 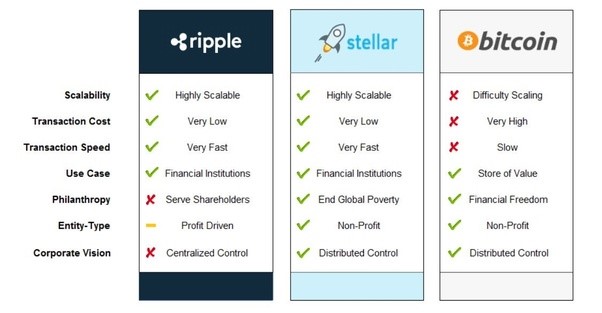 BTC, XRP and XLM comparison. Source of the image

Like Ripple, Stellar has low quotes. However, this is a very stable cryptocurrency. Forecasters predict growth to one dollar. Because XLR can be added to your investment portfolio.

Last strong candidate. This platform provides the highest transaction speed after Ripple. One of the main advantages is the highest throughput. Today, only Visa and Mastercard have better performance.

Due to its technical qualities, NEM is highly popular among investors and ordinary users. Again, quotes are very low due to huge emissions. Today, the price of a single XEM is $ 0.06, but according to forecasts, by 2020 the cost can reach $ 1.5 - $ 2.

One of the most pressing issues of recent years - can any of the Altcoins come out on top, overtaking Bitcoin? Many users (in particular, the opposition Bitcoin) claimed that this is possible.

The first challenger was Ethereum. This project quickly climbed to the top, receiving the vocation of 90% of the community. But, as I said, it lost his position by analogy with BTC, as soon as there were problems with scalability.
The second was Monero. The main argument is a higher level of anonymity. But research has shown that in fact 90% of XMR can be tracked. Even after a hard fork, 50% of transactions are still impossible to completely hide.

The third and so far the last challenger is Ripple. It occupies the top places of the ratings thanks to a high-performance network and recognition by world banks. But the problem with this cryptocurrency is a large number of tokens. Because of this, quotes and growth rates are very low. Accordingly, the XRP capitalization is also developing less rapidly.

Outcome: Bitcoin is still a very long time to be on top. Its position in some way "dictates" the situation for the entire market. Therefore, even with a decline in BTC, the entire market will collapse. Also recommend to read more about of bitcoin price prediction in 2022.

Merehead does professional development of cryptocurrency (bitcoin) forecasts for 2020. If you have questions, contact us for a free consultation.

Category: Trends 01/25/2023
Cryptocurrency Trends in 2022
The rapid development of cryptocurrencies is an opportunity for investment not only for regular users but for big corporations too. This growth of digital money is a result of technological improvements and the world is constantly trying to use decentralized allocations as a paying method. If you want to make good investments, you will need to understand which cryptocurrencies will be popular in 2022. 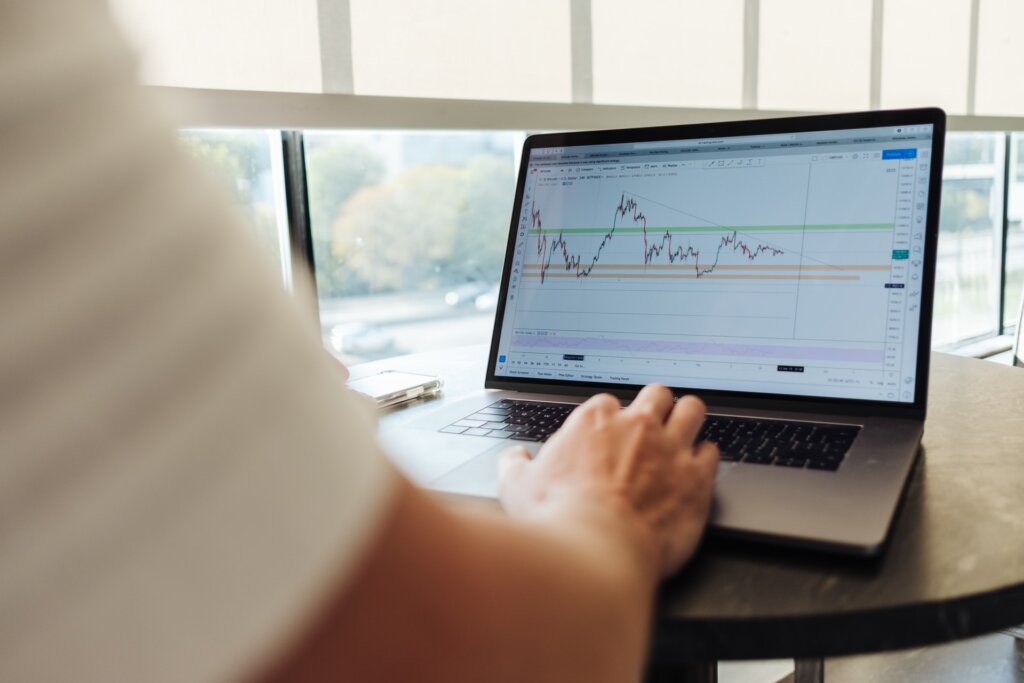