Angular vs React vs Vue: Which is the Best Choice for 2021

Write to Yuri
Merehead / Blog / Trends / Angular vs React vs Vue: Which is the Best Choice for 2021
Subscribe to our newsletter
You are the rock.
Thank you!

When beginning a new web development project, many developers have a question: «What tools will be the most appropriate?».

Obviously, JavaScript is the backbone, because today it provides a broad functionality to create frontend. But people face a dilemma when choosing the best JavaScript framework because there’s a lot of frameworks and each one of them has standout features.

As a rule, a dispute is based around three frameworks – Angular.js, React.js, and Vue.js. So now, we’ll consider their pros and cons and popularity among developers.

First of all, we’ve analyzed thematic surveys, i.e. The State of JavaScript and Stackoverflow. They annually provide the most accurate information about the popularity and condition of the development of various frameworks. 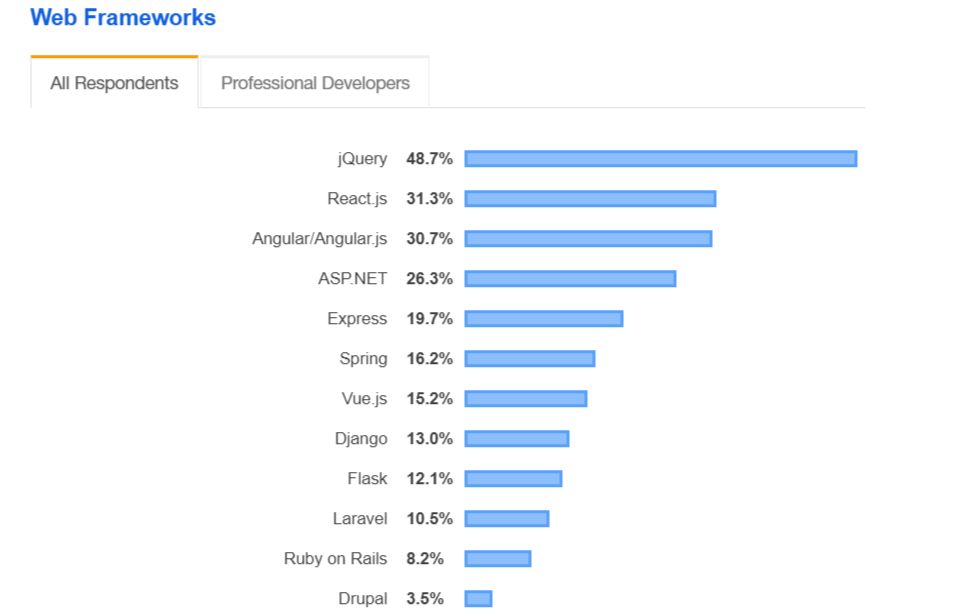 Most popular web frameworks. Source of the image

Despite the rapid development of Vue.js, this framework is only at the seventh position in the rating (both among all respondents and among professionals). React.js and Angular.js placed second and third respectively.

It’s remarkable that according to total result, React.js caught up on the second position, but professional developers separately put Angular.js in the second place. 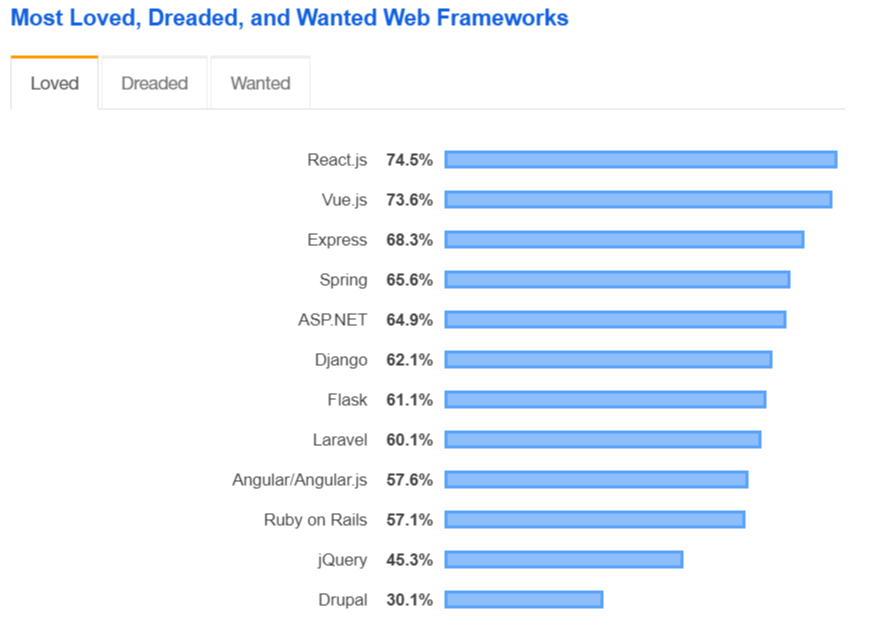 Most loved frameworks. Source of the image

Nevertheless, developers like working with React.js and Vue.js, and in the meantime, Angular.js turned out to be practically at the end of the list. React.js. happened to be the most desired to learn among those, who have never developed apps with the help of these frameworks before. It’s followed by Vue.js and Angular.js took the third place.

One of the important development indicators of technological stack or framework is a number of downloads. NPM trends shows the most precise statistics for each tool including not only the number of downloads but also data of Github.

Downloads of Angular.js, React.js, and Vue.js. Source of the image

As you can see, React.js is significantly far ahead of its competitors in this respect. Angular.js has lost a considerable number of downloads comparing to 2018. Starting with the middle of 2019 it has still not passed 1 million mark. Vue.js is gradually gaining momentum. Specifically, early in 2019 it had no more than 500 thous. downloads and today this indicator is consistently higher than 1 million.

Frameworks rating on Github. Source of the image

These indicators reflect the results of Stackoverflow’s survey. Vue.js’s and React.js’s rating is significantly higher than Angular.js’s. This is the reason for the big difference in downloads.

This annual report is the most critical development indicator of JavaScript in general and all tools related to it.

Frameworks rankings according to State of JavaScript 2019. Source of the image

Developers are mainly content with the working process with React.js and Vue.js. Angular.js only 38% meets their needs. Likewise, only 23% of developers have a special interest in Angular.js, and meanwhile this indicator of Vue.js and React.js is 64% and 61% respectively. 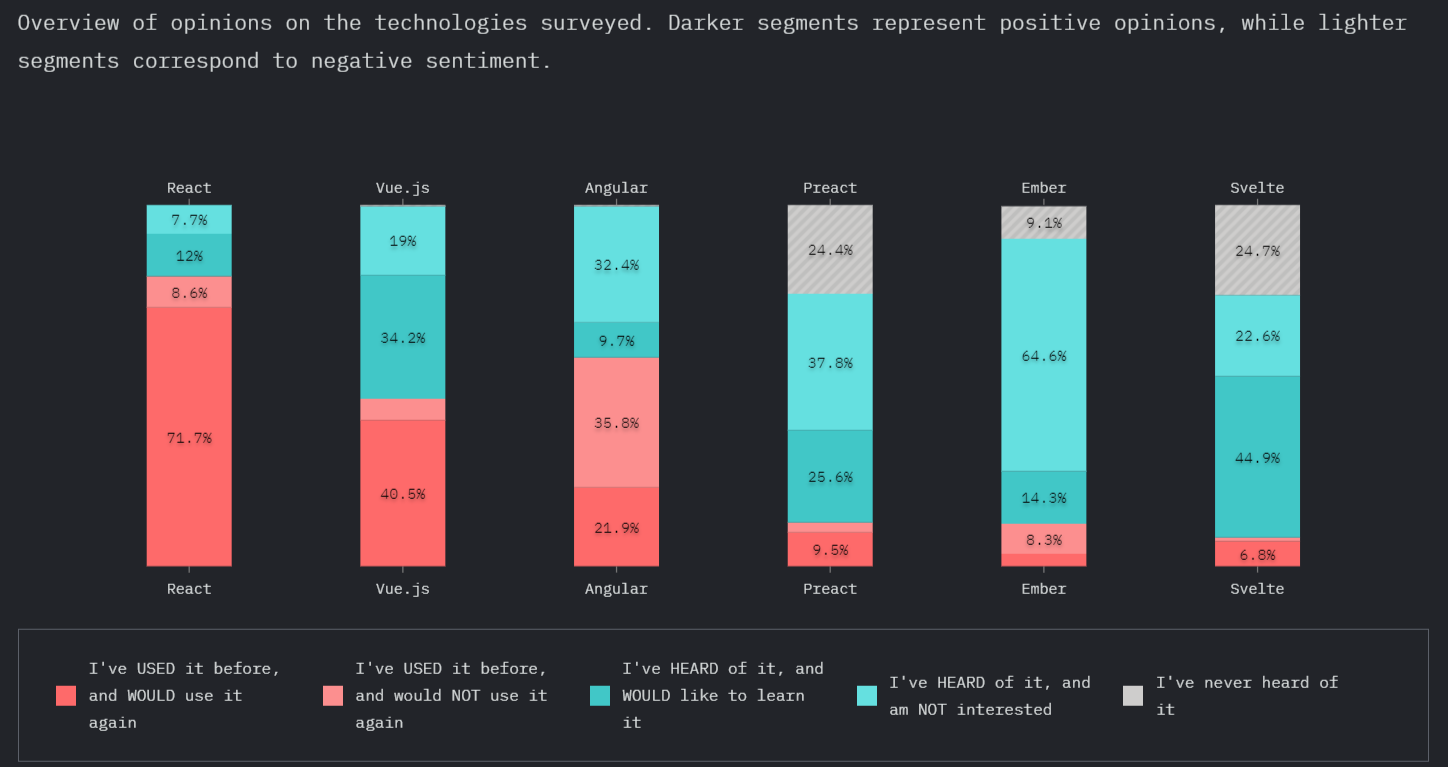 Opinions on frameworks. Source of the image

Results are similar concerning the frameworks. Most respondents either aren’t interested in Angular.js or have used it earlier, but don’t want to work with it anymore. React.js is hugely popular and the majority of respondents continue to use this framework to solve their tasks.

Stats of frameworks usage by company size. Source of the image
Noteworthy is that relatively small companies prefer React.js and Vue.js, while major developers (more than 100 and over 1000 employees) are more likely to use Angular.js. Notwithstanding, these indicators are approximately equal.

React.js has been taking the first place in all ratings for the third consecutive year. Some developers have no complaints regarding this framework because it's growing rapidly and becoming more and more sustainable. 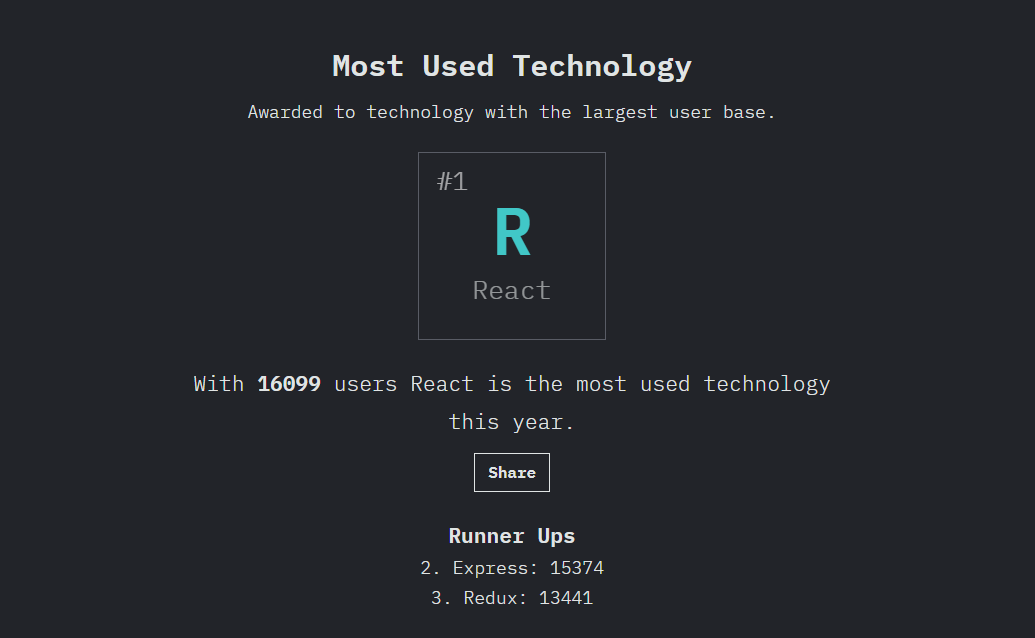 React.js is the most used tool of JavaScript. Source of the image

It’s significant that in fact, React.js is not a framework, it’s a library. But it has such a broad functionality that the tool can be frequently used without additional integrations. The frontend will be no less effective as a result.

React.js was released by Facebook in 2013 with the purpose of the division of user interface into a set of components to simplify the development process.

React.js is a very saturated framework. For the most part, developers make only flattering remarks about it.

However, Facebook has been releasing too many updates recently, which makes some tools outdated. A number of developers like this course of events. But for the most part, the community complaints about it because they have to constantly master new techniques.

It’s significant that React.js specialists are the most wanted in the USA today. May 2020 est. there are more than 30000 vacancies for the query React.js that are active on LinkedIn and about 4000 on Indeed.

One of the key reasons for React.js’s popularity is the support of reputable company Facebook. Such services as Instagram, Whatsapp, and Twitter are working on the basis of this framework today. All of them are very fast and have an attractive appearance. This has ensured a high level of trust in React.js.

Despite the multiple benefits, there are only a few cases, when this framework will be the most appropriate:

It doesn’t mean that React.js is bad in the rest of the cases. It’s more like alternative choices will be more preferable.

Vue.js is a discovery of recent years. It has suddenly turned from the ordinary framework into one of the most loved frameworks among the professionals.

The popularity of Vue.js over time. Source of the image

It’s worthy of note that its popularity grew without the support of major companies. Market giants paid their attention to Vue.js only after a sharp jump. That is why it turned out to be the third framework in long opposition of React.js and Angular.js.

Vue.js stands out as having a huge number of special aspects. Some of them can even appear for cons. For example, Vue.js is very flexible. However, in the case of work on a big project in a big team it might trigger a huge number of mistakes.

After Vue.js started showing its peculiar properties, many market giants like Gitlab, WizzAir, EuroNews paid attention to it. Grammarly is fully created on the basis of Vue, and Alibaba and Xiaomi announced a full transition to Vue.js in 2018.

Besides, this framework is in heavy demand in the Asian market today. Therefore, a greater number of discussions and tricks of use are in Chinese. You don’t know the language? You’ll have to limit yourself to documentation and recommendations in English.

Despite the fact that this framework suddenly became popular, demand for the developers didn't increase to the same extent. Specifically, there are only 8000 vacancies for the query Vue.js on LinkedIn, and about 4000 on Indeed.

In what cases Vue.js will be the preferable choice?

Angular.js has long been the best choice for the development of the user interface. So it became a part of popular stack MEAN.

Interest in Angular.js over time. Source of the image

Nonetheless, over the past few years developers have been complaining about the inadequacy of this framework comparing to its competitors. As a result, many companies gradually give up using Angular.js.

To a great extent, this framework lost its popularity because of the emergence of new web development trends. Angular.js’s team didn’t implement the needed functionality in new versions of the framework. This is why we see Vue.js and React.js becoming more preferable choice today. If falling beyond the scope of these three frameworks, then Angular.js is sometimes inferior to other tools (for instance, Svelte).

Nevertheless, Angular.js is still used to support many popular websites and web apps. They include The Guardian, UpWork, PayPal, and Sony. All of them are major websites, where Angular.js proves itself well.

The most interesting thing is the demand for Angular.js specialists. Despite the decrease in popularity and decline of estimates, the demand is practically at the same level as React.js’s. Specifically, there are about 30000 vacancies on LinkedIn and over 5000 on Indeed.

In what cases you should pay attention to Angular.js?

Based on statistics, results of surveys, and various reports, we can conclude that the most preferable choice in 2021 is React.js. The second place is taken by Vue.js, and Angular.js is in third place by a large margin.

But if abstract your mind from statistics and consider only the contextual use, then there’s no the best framework as of today. Anyway, every framework has its pros and cons. Similarly, each one of them has a lot of admirers and opponents.

Angular vs React vs Vue: Which is the Best Choice for 2021 key takeaways:

Merehead does professional development of Angular vs React vs Vue 2021. If you have questions, contact us for a free consultation.

Category: Trends 01/24/2023
Angular.js vs React.js 2019 - What's More Popular?
Website development, moreover based on the blockchain trends, is not easy. You can’t do anything without additional programs that facilitate part of the work. They are called frameworks. For those who do not know, the framework is software that facilitates and accelerates the creation and combination of various elements of a serious (in size) software project.

Category: Trends 11/18/2021
Angular vs React vs Vue 2020
Frontend is a rapidly growing direction in the development. For it created a lot of tools, libraries and frameworks that greatly facilitate the work and help to create the best project. But what to choose from the whole set?

Category: Trends 01/06/2023
Angular vs React vs Vue: Best Choice in 2022
When a programmer starts working on a new project, he is primarily interested in a set of tools with which he can make a project quickly and without problems. JavaScript is considered the most popular language for front-end development, since it has a wide range of functionality and a wide range of development environments. Usually, when defining a framework, many programmers run into the wall, trying to figure out which one will be better and more convenient. Each of them has its own interesting technical characteristics and features and offers its own functionality.