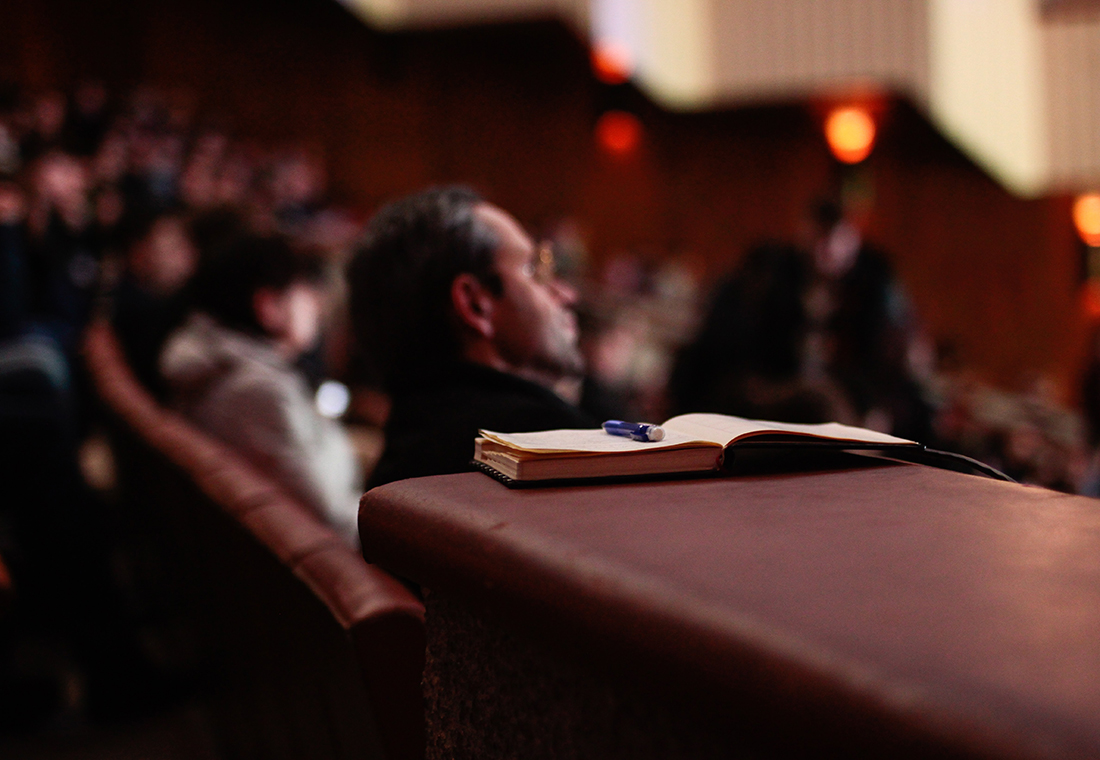 Write to Alex
Merehead / Blog / Conferences / React js and React Native Conferences 2020
Are there any questions?
Alex Boiko
Write to the expert

If you are a front-end developer, then today your life and work cannot do without React JS and React Native. After all, these are some of the most effective frameworks, and specialists are in demand in every company.

The benefits and demand for React generated a great stir. Every day someone finds new holes or vice versa - tricks in using a development tool. It is impossible to study everything at once: first of all, it is necessary to pay attention to the most effective changes. But how to determine the best approaches without personal testing?

One of the ways out is to attend an event that brings together hundreds of developers. In the case of React, about 15 thematic conferences are held annually around the world. We presented the best of them in the list below.


Why do we need such conferences

Many people believe that narrow-minded summits and congresses do not carry any good in themselves. The key argument is that all information can be found on Github, Stackoverflow and other services.

But why, then, do developers attend React conferences every year? Because this is not just information about new approaches to working with technology. This is a lively communication in the course of which it is possible to make out the most insignificant details. In addition, these are workshops and hackathons that allow you to see all the errors with your own eyes and without harm to the real project.

That is why attending at least one conference is necessary for both highly qualified developers and beginners. Moreover, it is necessary for the heads of companies involved in the development of sites, applications and software. 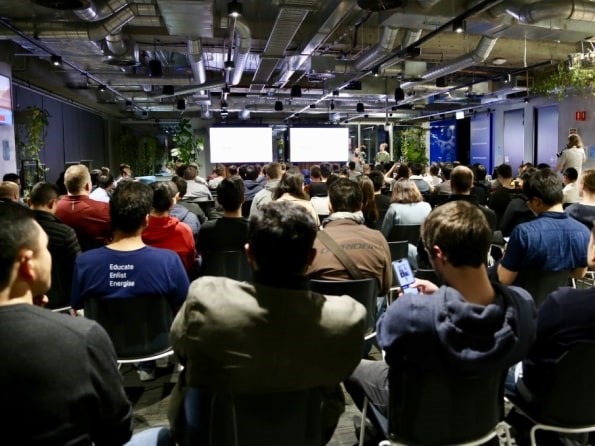 Founded by Jed Watson (co-founder of Thinkmill) React Conf AU was Australia's most exciting React event. You won’t see several thousand participants here, but you can meet with developers who look at writing code in a completely different way. This is one of the possibilities to add little-known but very effective life hacks to your arsenal.

Who will introduce you to these keynotes? Max Stoiber (Software Engineer on Github and co-founder of Spectrum), Mitchell Hamilton (Senior Developer at ThinkMill), Omri Bruchim (Mobile Engineering Manager at Wix), Alex Reardon (author of React-beautiful-dnd and Principal Engineer at Atlassian) and others. 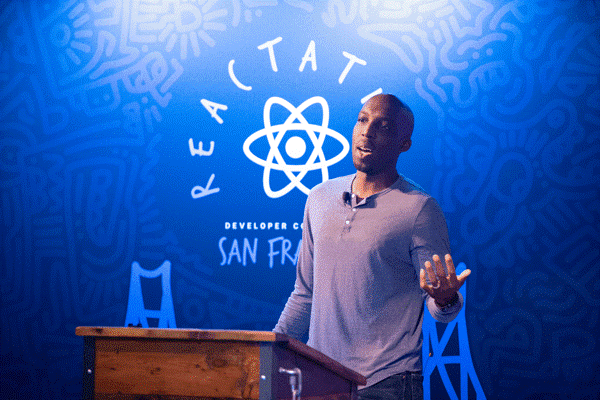 Reactathon 2019. Source of the image

Reactathon is an event that is held in the format of a conference + hackathon. It is organized by the Real World React and Flexport teams to bring together like-minded web development engineers. Thanks to a discussion of the most relevant and complex topics in the presentations, Reactathon participants return to their offices with useful information annually and take their products to the next level.

This year their insights will be shared by: Rayn Florence (co-founder of React Training), Jena Black (Data Visualization Engineer in Stitch Fix), Guillermo Rauch (founder and CEO at Zeit) and many others.

React Summit 2019. Source of the image

React Summit is positioned as the world's largest conference on React and React Native. Every year, it collects thousands of front-end and full-stack developers from around the globe. Traditionally, the first two days are devoted exclusively to workshops, and the last - directly to the conference

During the day of the conference, more than 25 speakers will be heard, including this year Sarah Viera (Senior Developer at CodeSandbox), Brandon Dale (front-end engineer on Facebook), Kent S. Dods (founder of Kentcdodds.com) and Jason Lengstorf ( Principal Developer at Netlify). 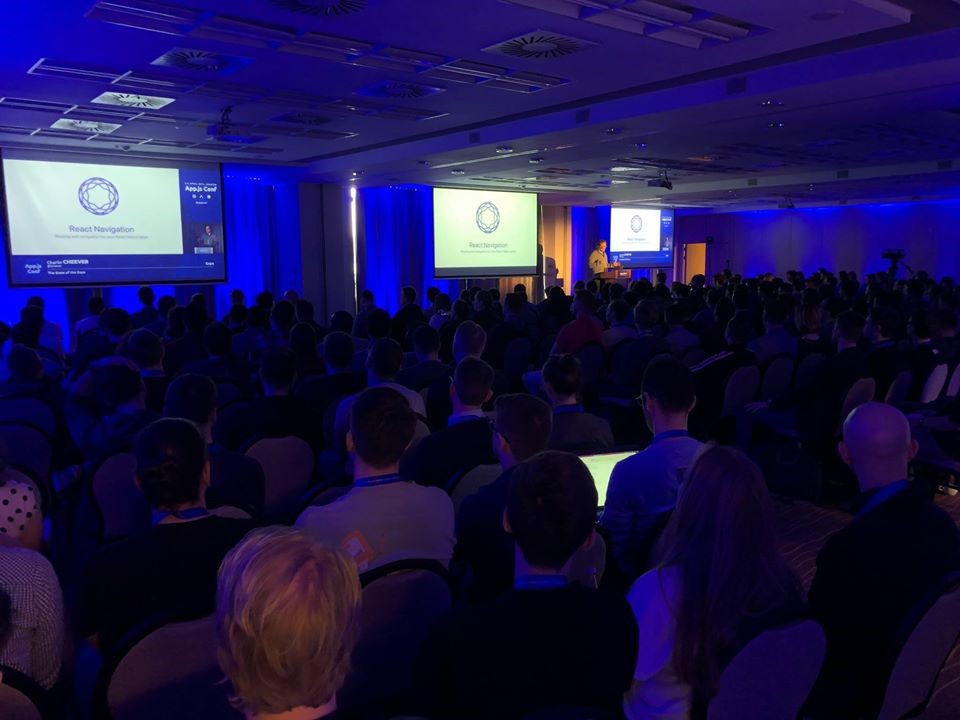 App.js Conf. Source of the image

AppJS has become one of the React Native libraries, which is increasingly being taken as the basis for application development. So to speak, with it every developer feels safe. During the conference, you will be able to get acquainted with the members of the Expo and Software Mansion, discuss the relevant topics with the participants of the event and get the main insights about using React Native tools first-hand. 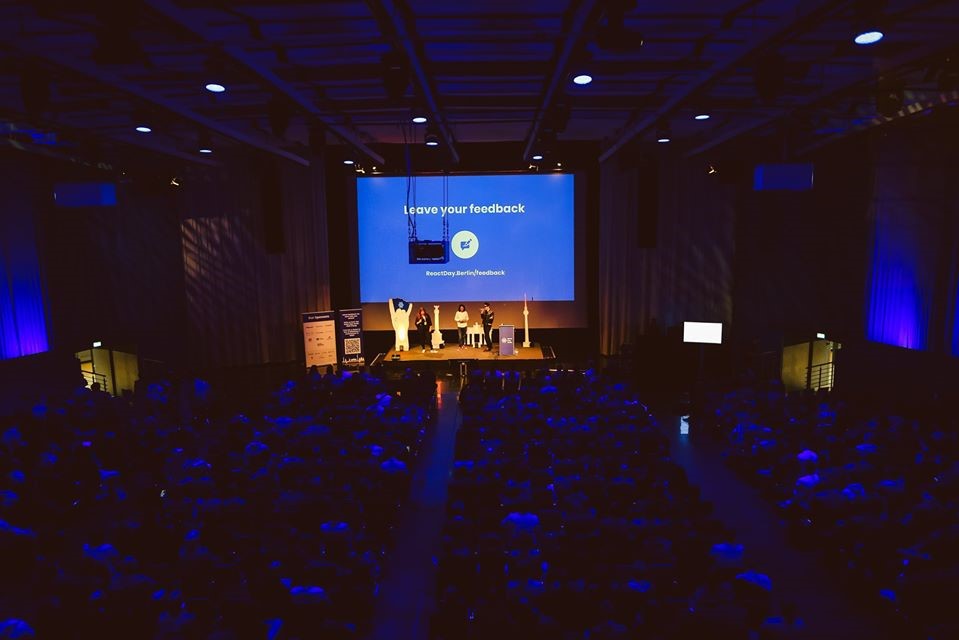 A regular one-day conference, completely filled with tons of reports and discussions related to everything about React and React Native. For 3 years, React Day has been held in Berlin for a community from Europe. As the scale of the conference increased, in 2020, in addition to Europe, it will be held for the first time in Asia, namely in India.

The organizers are still compiling lists of topics and speakers, so this information is not available. You can learn from the Twitter conference that in mid-January, 237 topics were proposed for discussion. The schedule, and accordingly all details will be announced on March 1, 2020. 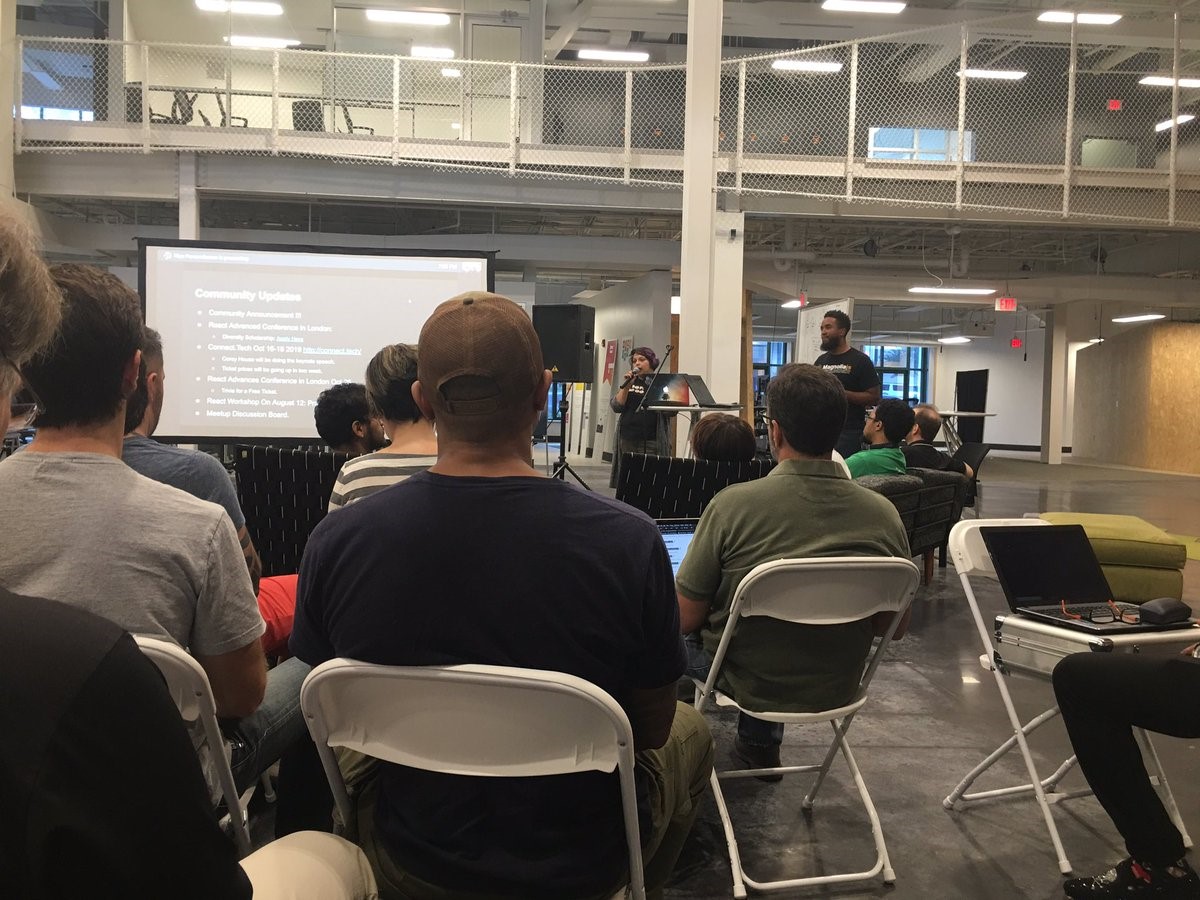 React ATL is the first major React conference held in the southern United States. By visiting it, you will learn about how experienced developers prepare their projects, what set of tools they need for different tasks, and what you should not do when writing code in React.

Why go to React ATL this year? Because you can hear not just general statements, but the most unexpected React details from speakers like Sophie Albert (PM at Humuic), Gant Labord (CIO Infinite Red), Tracy Lee (co-founder of This Dot Labs), Adora Nvodo (Microsoft Software Engineer) and Adrian Valdivia (UI Engineer at SalesLoft). 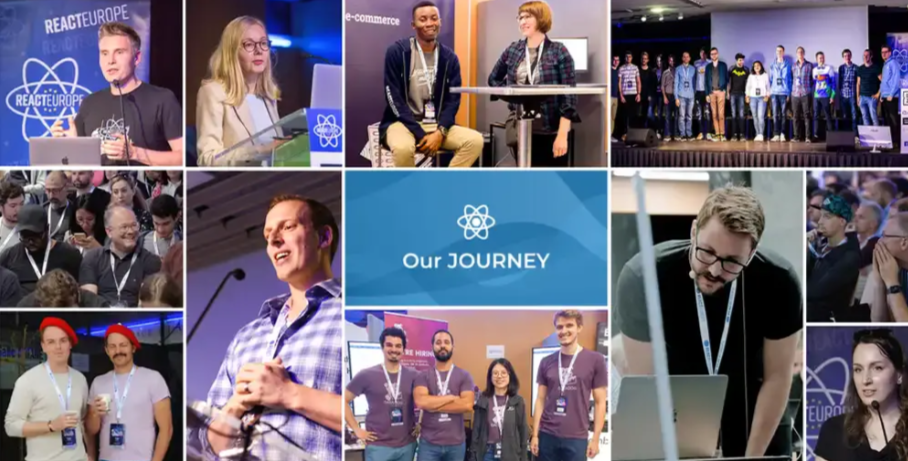 React Europe is one of the events where new industry standards open up to the world. It has been held since 2015 and today is one of the largest conferences on the topic of React and React Native. During the conference and workshops, you can meet developers from key React teams from around the world.

Since the conference is large-scale, the organizers have already compiled a list of speakers today. So, among them are Devon Hove (creator of Parceljs), Shruti Kapoor (Software Engineer at Paypal), Tim Neutkens (co-author of Next.js), Yves van Horne (creator of CodeSandbox) and many other experts in the field of front-end development. 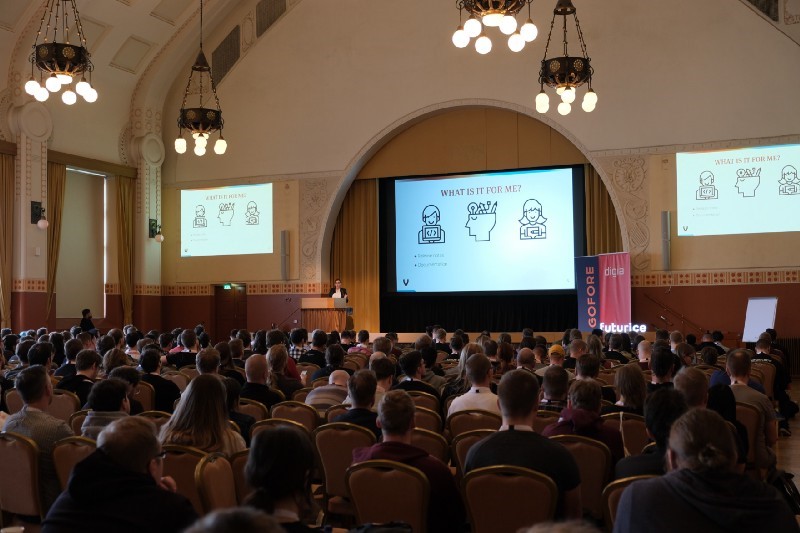 React Finland 2019. Source of the image

In 2020, React Finland's speakers are: Rebecca Hill (Full Stack JS Engineer at WeTransfer), Kenigbolo Maya Stephen (front-end lead at BCaster), Tobias Timm (co-organizer of React Munich), David Hourshid (web developer at Microsoft) as well as many other leaders and developers from around the world. 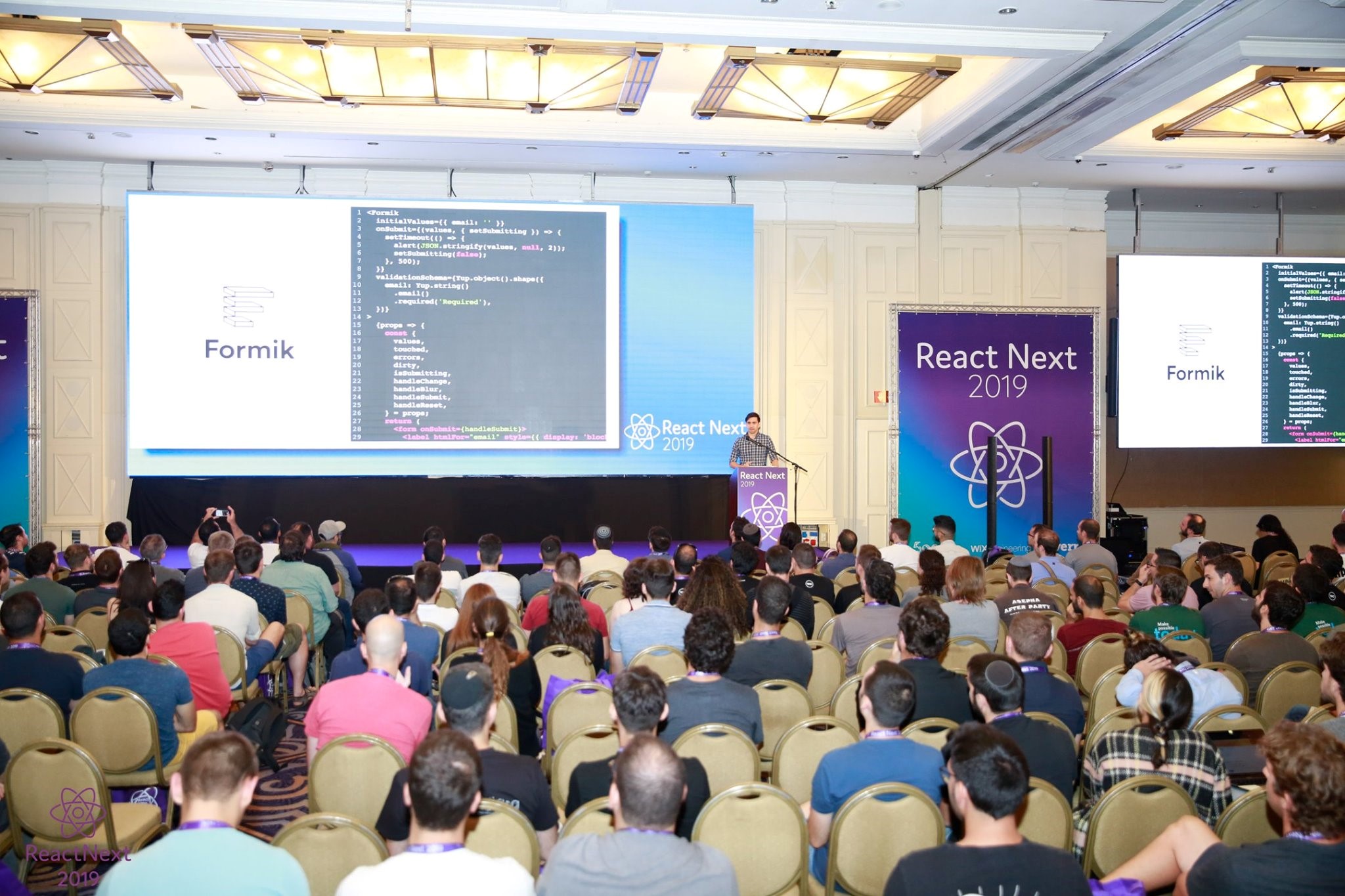 React Next is one of the largest ReactJS conferences in Europe, and it was also the first ever ReactJS international conference in the Middle East. Despite the fact that this is a one-day event, it gathers hundreds of participants and dozens of exhibition venues from around the world. So, this year you will have the opportunity to chat with more than 750 participants. React Next targets both beginner and experienced developers.

Presentations at the following sessions will be presented at React Next 2020: ReactJS, React Native, Redux, MobX. In addition, general performances about the entire ecosystem are planned. The full program, as well as the list of speakers has not yet been announced. However, last year, David K. Piano (Software Developer Microsoft), Chen Feldman (React Development Consultant), and Liad Yousef (Software Architect Duda) performed from the stage). 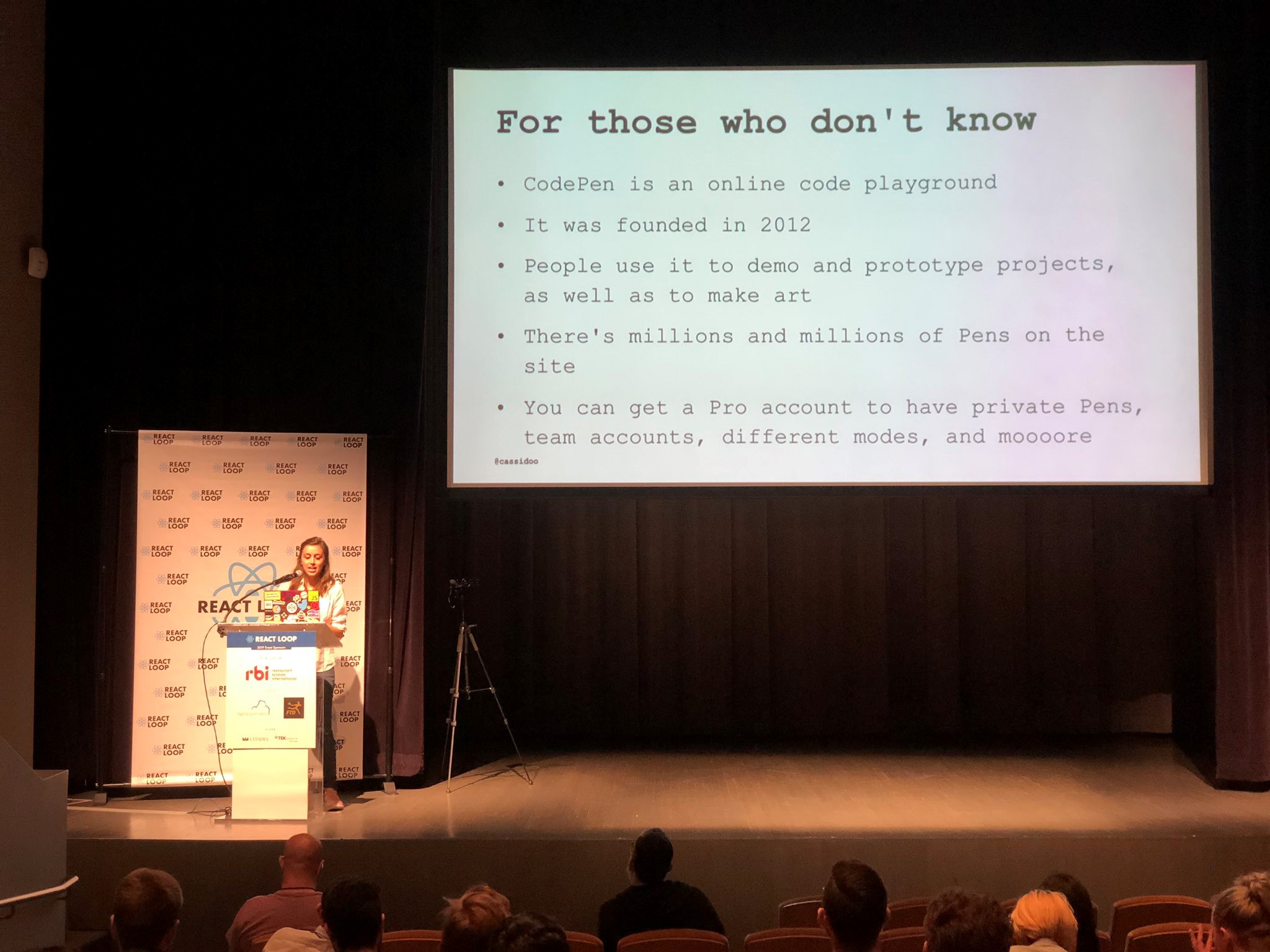 React Loop is a conference for advanced users of the React ecosystem. Here you will get a chance to consider new approaches in development, about the latest ideas of the new version of React Native and just be able to chat with your colleagues. Despite the fact that the conference is designed for experienced users, it is often visited by beginners and leave from there with a new store of knowledge. The organizers are focused on the personal communication of the participants, therefore they limit the performances to 30 minutes and take many breaks.

The final list of speakers is still being formed, but it’s already known that this year the stage will be performed by: Tyler Mac Ginnis (founder of TylerMcGinnis.com), Ben Ilegbodu (Principal Frontend Engineer in Stitch Fix) and Kent S. Dodds (founder of kentcdodds.com). 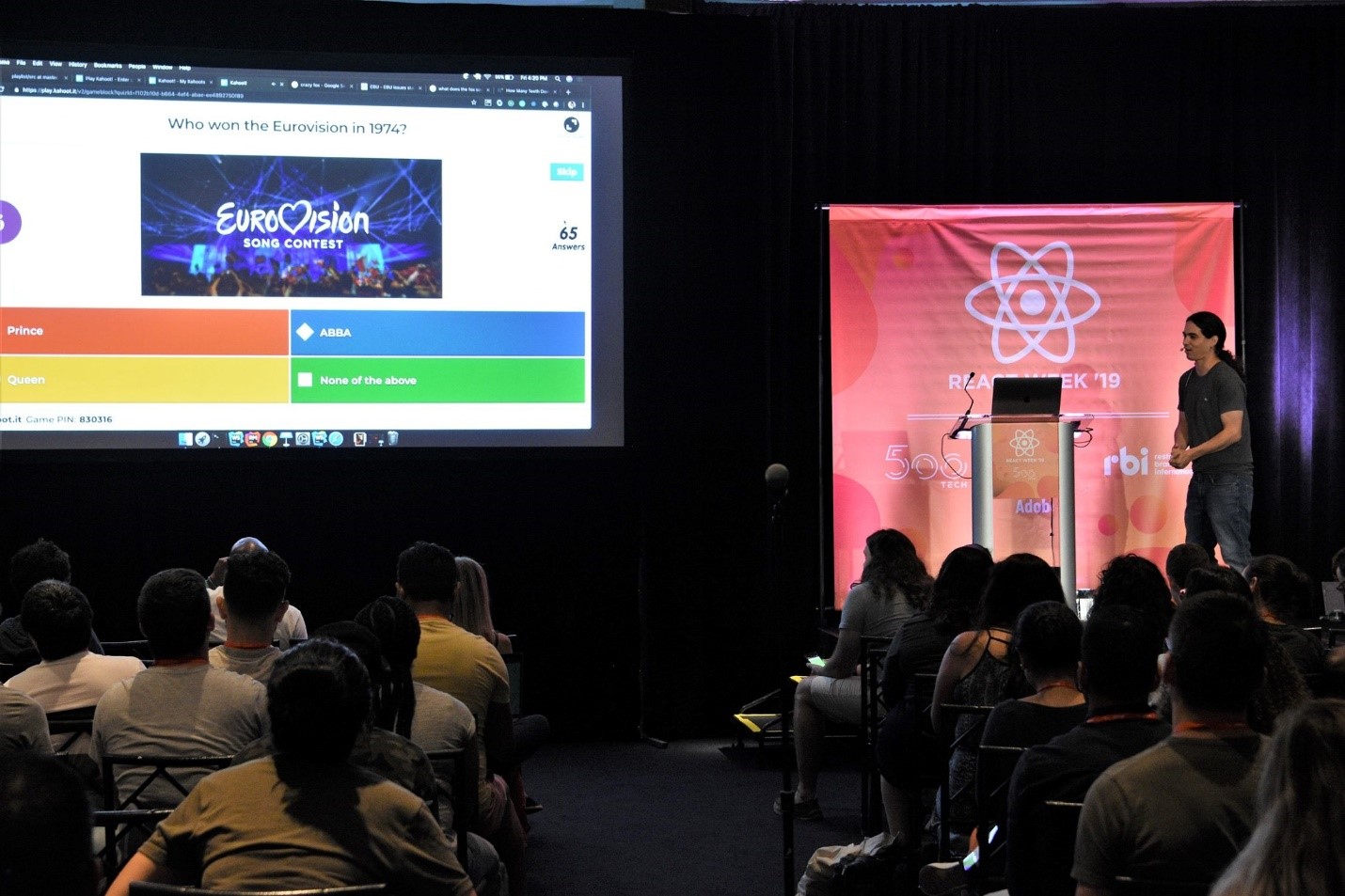 Why React Week? This is an opportunity to spend a whole week in a huge circle of developers from around the world. Here you will learn not only about the intricacies of working with React, but also get a chance to learn about the integration of the framework with other tools, as well as discuss completely different technologies during the breaks. And most importantly: on the last day of the event you will find a hackathon, where you can demonstrate your abilities.

One of the most attractive elements of most conferences is the speakers. Speakers at React Week this year include: Naomi Meyer (Software development engineer in Adobe), Alex Castilio (Google Developer Expert), Sam Bellen (Developer Advocate Engineer in Auth0), Alex Loeber (full-stack developer, founder of LeanJS and React Graph QL Academy) and many others.