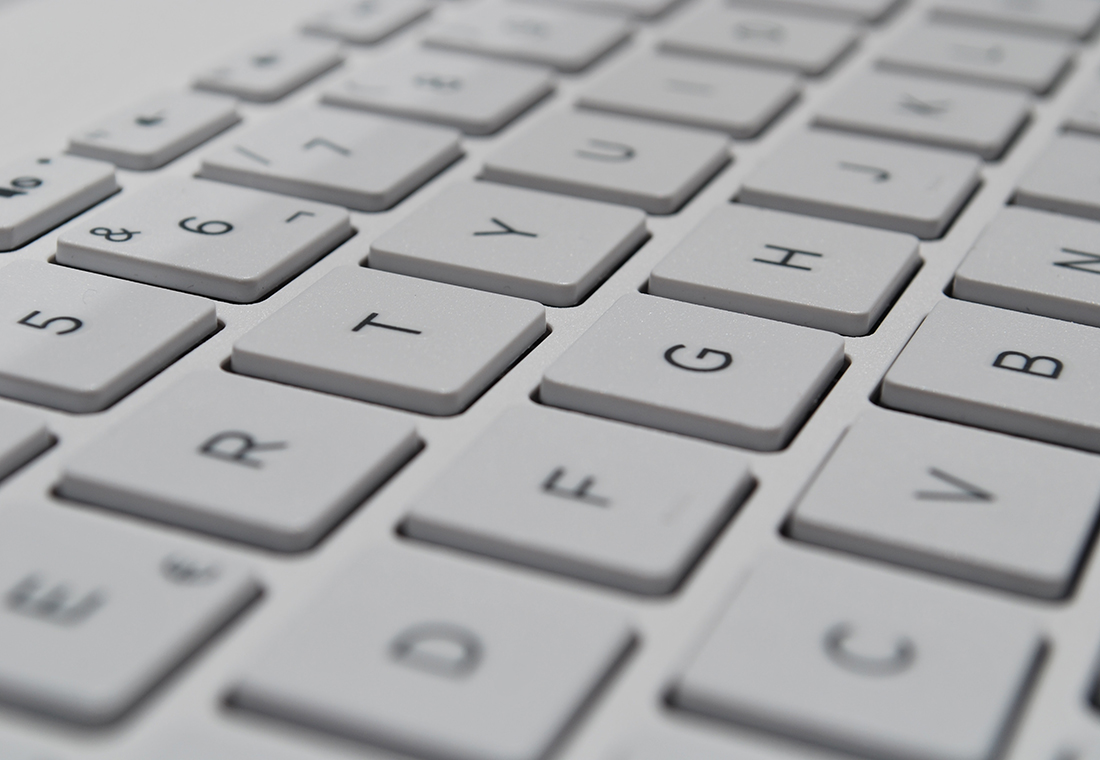 Write to Yuri
Merehead / Blog / Trends / Outstanding Devs: Top Programming Languages to Learn in 2020
Subscribe to our newsletter
You are the rock.
Thank you!

One of the most important skills for today is the ability to write a program. After all, computer technology is everywhere, from factories and transport to home appliances. They have greatly simplified our lives. An ordinary user, as a rule, heard about 3-4 programming languages. But professional coders know that they are many times more. According to various sources, on average today there are between 500 and 5000 programming languages. These top popular programming languages help you to get a new software developer job in 2020!

Most Popular Programming Languages to Learn in 2020 are:

But among them, year after year, programmers trust only a dozen (if not less).

Obviously, a language chosen for subjective reasons. But for me, it was a surprise to see a huge difference in polls from different sources. This article was prepared by team of software developers, project managers, and business developers to understand what is going to be popular in the coming year and what you shall learn if you didn't do it earlier.

One of the largest IT hosts annually publishes statistics on the use and development of programming languages, frameworks and libraries. Their audience includes about 31 million developers and at least 2 million organizations. Therefore, the indicators can be considered quite reliable. 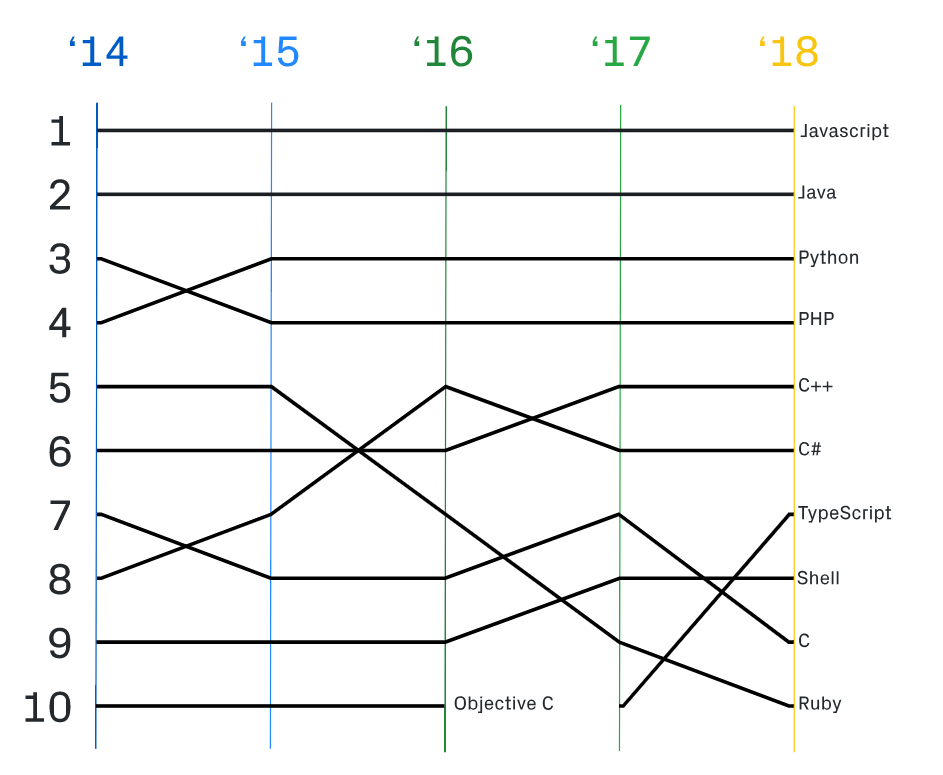 As can be seen, the same languages fall into the top 10 of the last 5 years (with the exception of TypeScript, which broke into 7th place only this year). Remarkably, the top four is completely unchanged. It is clear that the programmers have not yet discovered anything new and prefer proven options.

They also published data on the popularity of languages in different parts of the world: 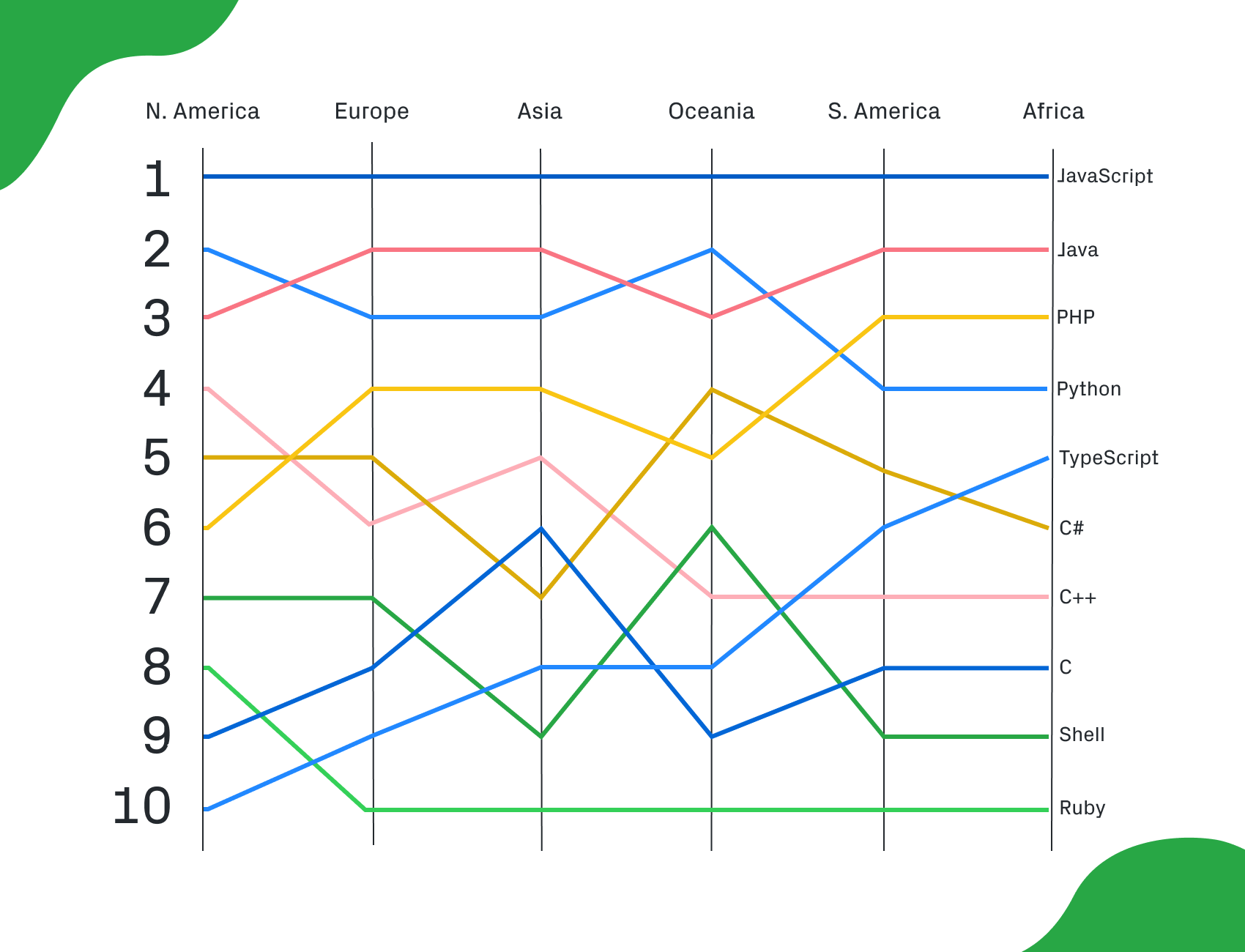 Javascript and its frameworks are consistently the best, regardless of region. Speaking about the sensation of the year - TypeScript, it is worth noting that it is mainly used in South America and Africa. Presumably, this is due to the younger community of developers of these regions, which are aimed at new technologies. And TypeScript in this regard is considered one of the newest.

PYPL and TIOBE are two indices that analyze the popularity of programming languages according to the frequency of search queries. PYPL explores Google trends exclusively, while Tiobe takes data from Youtube, Wikipedia, Bing and other popular systems.

But there is one nuance: PYPL examines only the pages that describe the programming process, and TIOBE creates a rating based on all sites where there is at least a mention of a language. Because it is less accurate. I provide the latest published data so that you can be sure. 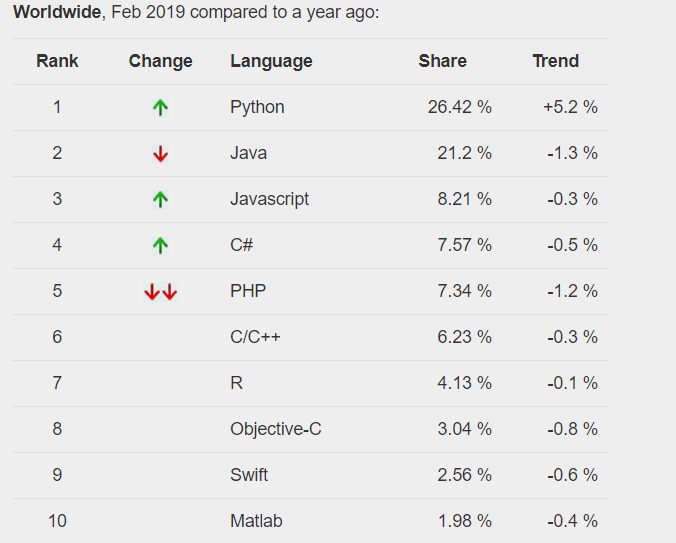 The data is significantly different from Github ratings. First of all, Javascript takes only third place, behind Java and Python. Typescript in this list is located on the 11th place, Ruby - on 12. Well, such programming languages as Shell and C did not even make it to the Top-20.

I will go to the TIOBE statistics:

The first thing that catches your eye is seventh place for Javascript and 8 for PHP. In general, the figures are significantly different. Personally, it's hard enough for me to believe that these two languages have such low popularity. Because every SEO optimized website created thanks to it.

You could say that I unreasonably withheld. But I want to provide the results of a survey of programmers conducted by Stackoverflow, drawing attention to some of the details. 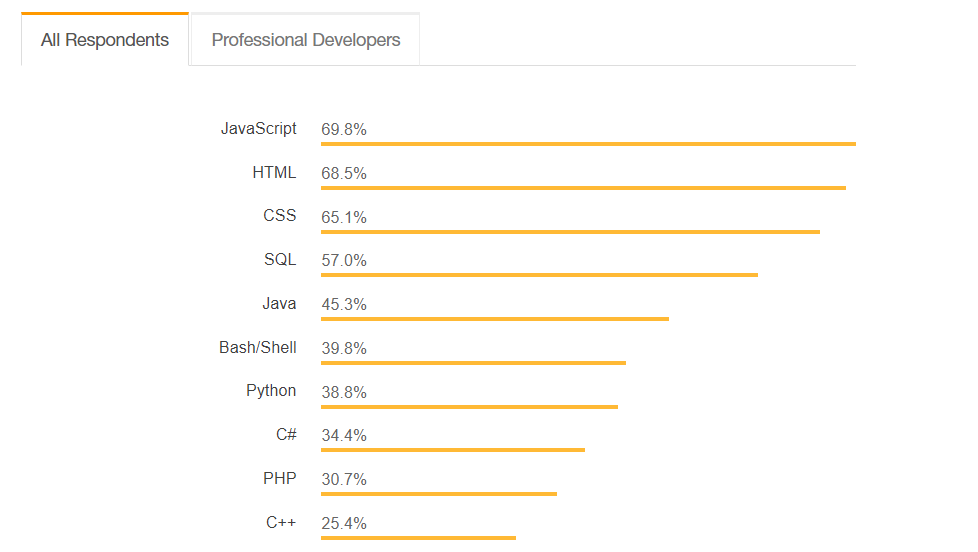 Most Popular Stackoverflow Languages. Source of the image

First of all I draw attention to the fact that immediately after Javascript, the tip is occupied by 3 languages that I have not mentioned before: HTML, CSS, SQL. A survey of professional web developers showed the same ratings, with only a small percentage difference.

Typescript and Ruby in this ranking took 12 and 13 places respectively. But Visual Basic. NET is located at 18, while TIOBE is 6 at index. 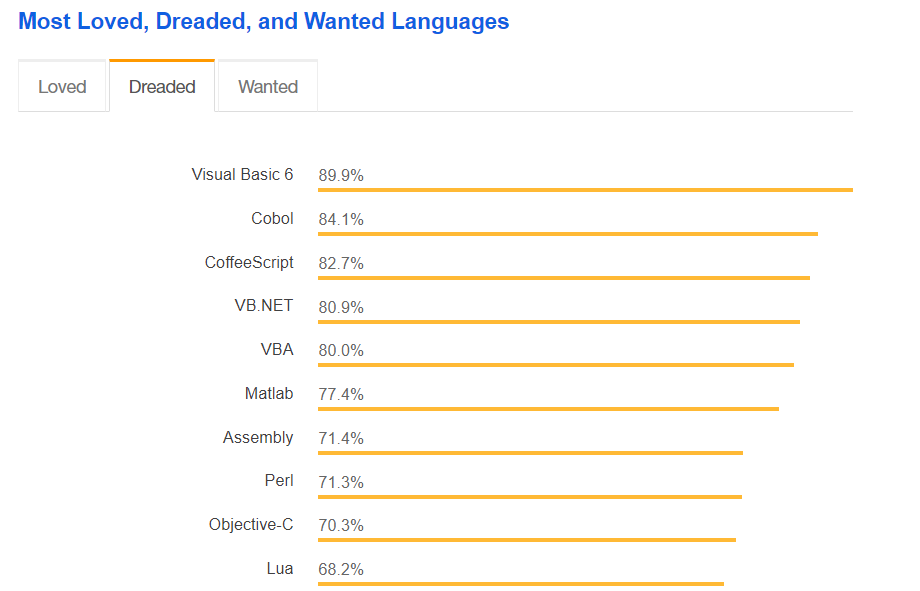 Most dreaded languages. Source of the image

Much more interesting statistics - the most loved, dreaded and wanted languages. VB.NET ranked the top 4 in the second category. Typescript after the 4th place in the first and third categories. Also high positive results in the most popular languages - Python and Javascript.


What to look for

Having studied all the statistics, we can distinguish several programming languages that will definitely be a trend in 2020.

Javascript is the front-end programming language most widely used in the world for developing web applications like SPA or MPA. It allows you to create all the animations, set up a lot of buttons, manage multimedia and much more. In other words, Javascript is the unconditional basis for front-end development and its frameworks Angular, React and Vuew .

Javascript benefits in 2020 are:

Javascript Disadvantages in 2020 are: A unique feature of Javascript is a set of functional frameworks. So, Node.js with Express.js allows you to use this programming language to run server-side scripts.

80% of companies require candidates for work knowledge of Javascript and the presence of experience in its environment. That’s why this language is a constant trend for several years.

As the popularity of Javascript grows and its use by large companies, the process of simplifying the writing of code and its maintenance becomes more and more difficult. For this reason, Microsoft developed Typescript, which extends the capabilities of JS. In addition, applications written in Typescript can be compiled into Javascript.

Typescript Benefits in 2020 are:

Typescript Disadvantages in 2020 are: As the statistics of Github and PYPL showed, this language is gaining momentum, and its community is expanding. The documentation is very well designed because it is not so difficult to learn. Despite the shortcomings, it is highly likely that its ratings will increase significantly by 2020.

HTML allows you to organize all the page content. It is also widely used for web page layout and is considered fairly simple to learn. Very often they start their programming path with HTML.

HTML 5 Disadvantages in 2020 are: It cannot be said that this language will be used by large corporations. Its functionality today is not enough to create sites of the 2020 level. Nevertheless, it is still good for beginners and will often be used to create news portals, online stores and more.

One of the most popular server-side programming languages. According to the latest PYPL statistics, users most often seek training and assistance in working with Python. As a rule, it is used to write scripts and plug-ins. For example, through Python are recorded episodes and actions of characters in games.

It is a universal language with easy to read code. Due to the features of the syntax, programmers need to perform fewer actions to create a plugin than in Java or C ++. Brands like Instagram and Surveymonkey use it. Google, Netflix and Quora cannot do without Python.

Python Disadvantages in 2020 are: Many advice Python to absolute programming weasels for initial learning. Ideally, after 2-3 lessons, you can write a simple code.

Python ratings are growing noticeably. In the past, statistics put it in 4-5 places, but in February 2019 it was already in the first place in the number of search queries. More detailed statistics will be only at the end of the year. But now we can confidently say that this is the main trend among programming languages.

Another popular choice of programmers. This language is widely used by large enterprises to create applications of various kinds. The Java environment is incredibly stable, making it the choice for writing Android applications.

A lot of sites today do not function without Java. It is noteworthy that every year there are more such services. Because of the demand for professionals who are well versed in this programming language, more and more.

Java Disadvantages in 2020 are: What can I say about Java? Strong old fellow, to whom no one has found a replacement. It is a little behind the current pace of technology development. But thanks to the high-quality code compilation and high stability, it still occupies high positions. Recently, there has been a decline in interest in Java, but it is still one of the most desirable languages among programmers.

Despite the fact that this PHP is losing the battle of Python and Javascript, it is still highly ranked in the market. Today, about 70% of sites use PHP, and in Wordpress about 90% of the code is written using this language. Thanks to PHP, you can create very dynamic and interactive sites, which is very pleasing to the eye of the current user.

PHP Disadvantages in 2020 are: PHP is one of the most controversial trends. If you are up to date, most developers have called it the worst programming language. Moreover, due to the low threshold of knowledge, it is easy to stumble upon an amateur, rather than a qualified specialist.

Nevertheless, already over the years it occupies the top lines and, believe me, in 2020 it will be one of the most popular in the market.

Finally, I want to draw a little of your attention to the little-known, but rapidly developing programming languages. They have great prospects to enter the top 10. Among them are Kotlin, HCL and Go. We have already begun compiling a list of the top programming languages ​​in 2021. The article is updated every month.

Most wanted languages. Source of the image

So far they have not gained much popularity due to the relative novelty and traditional approach of companies to developing applications. However, the appearance in the TypeScript top indicates that interest in new methods is growing. Therefore, watch out for these languages and study their features at your leisure.

Merehead does professional development of most popular programming languages 2020. If you have questions, contact us for a free consultation.

Category: Trends 01/24/2023
Top Programming Languages 2018 to Learn
Programming languages are developing quite quickly, new languages are replacing the old ones. We should always keep our ears open to remaining a good specialist. I think every programmer doesn't want to be an outsider. We have prepared an article where we analyze in detail the top programming languages that will be popular in 2018. By the way, in the last article, we wrote about the trends of web development. 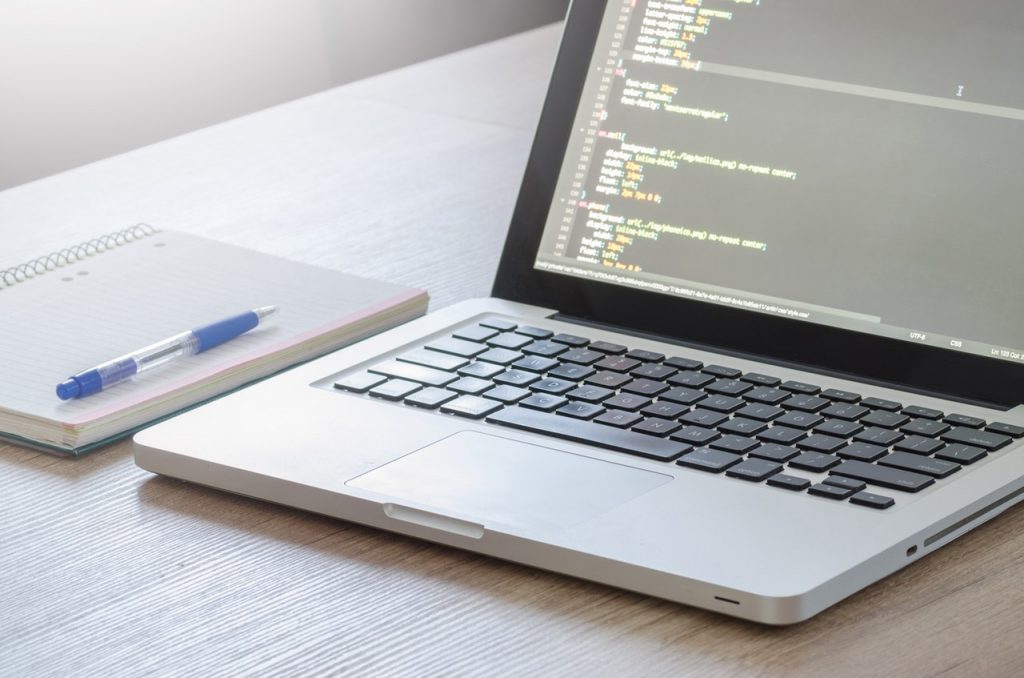 Category: Trends 01/16/2023
Top Most Popular Programming Languages in 2019 to Learn
The world of developers consistently falls under metamorphosis. Some trends appear, others - lose their relevance, and others - transform. However, some tools remain popular for a long time. Unlike many other trends directly or indirectly related to IT, here the changes are not so rapid. This is logical because IT-products themselves have usually subjected to more dynamic transformations, rather than the tools with which they are created. As for tools, for them is important universality. Also for programming languages, usability isn’t less relevant. Developers want to work with clear and functional tools. Earlier we wrote about trends in web design. 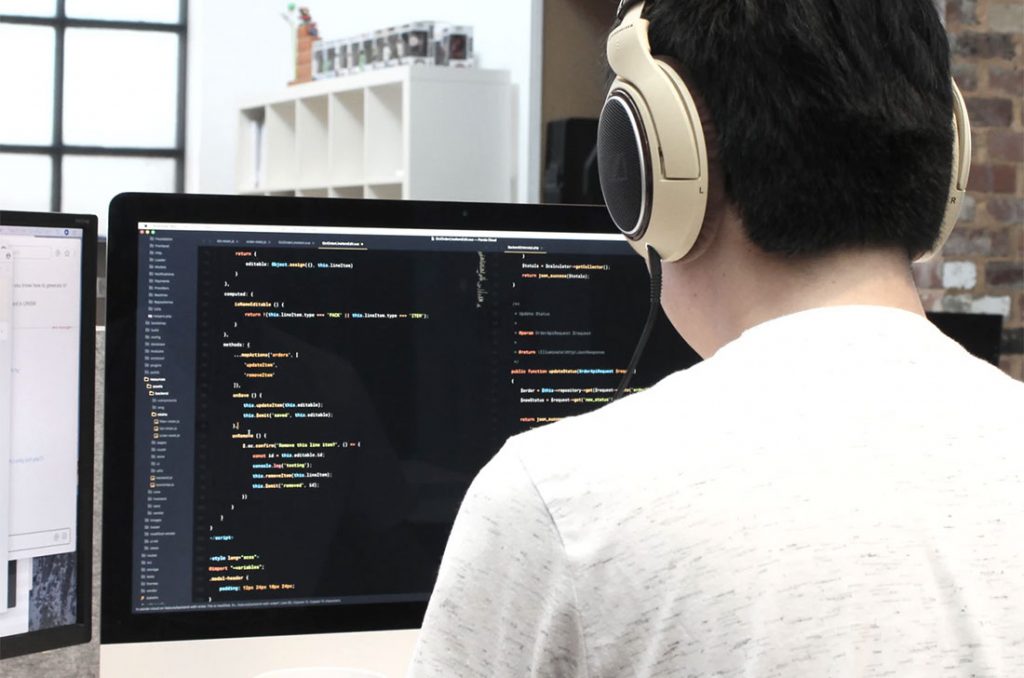 Category: Trends 01/16/2023
Most in Demand Programming Languages 2021
10 years ago, every second tried to become a lawyer or economist. Today, every second tries his hand at programming. Why? Because this demand for good programmers is growing exponentially. It’s also a high paying job. 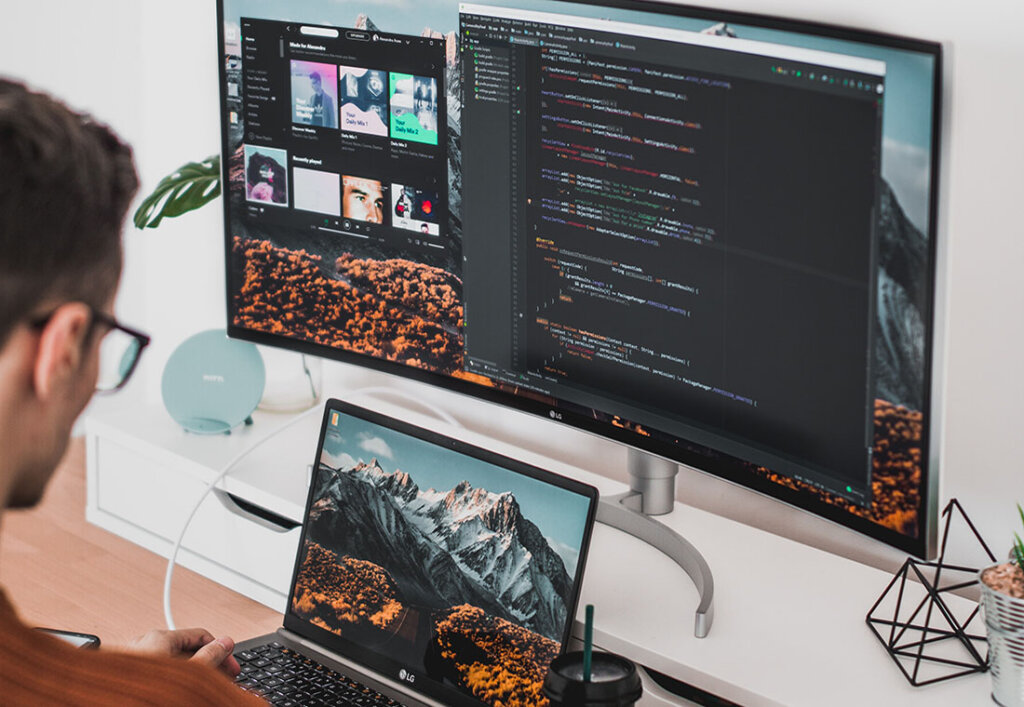