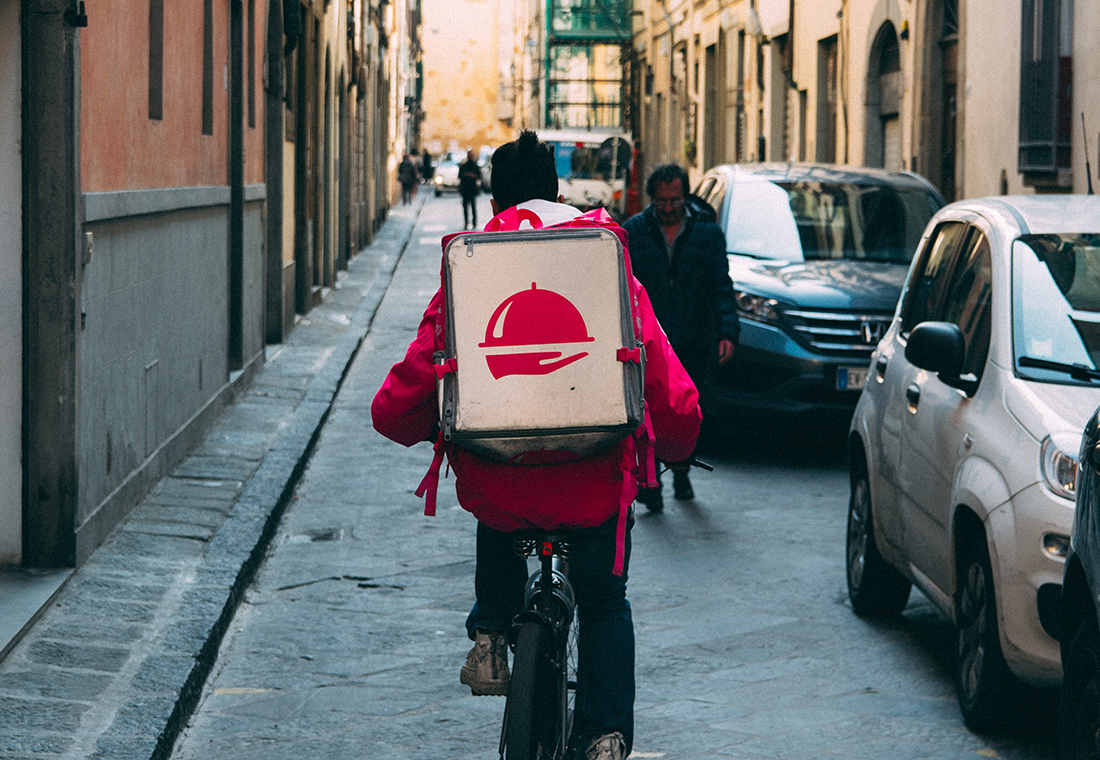 How to Build a Food Delivery Site

Write to Yuri
Merehead / Blog / Development / How to Build a Food Delivery Site
Are there any questions?
Yuri Musienko
Write to the expert

In 2018, the gross revenue of the online food delivery market reached $ 80 billion and it is expected that by 2023 it will increase to $ 140 billion (+ 11% per year). At the same time, the average check in online orders is 23% higher. This suggests that the market is booming, so if you plan to build a food delivery site, now is the best time to do it. There are not so many competitors. From the article you will learn how to do it as efficiently as possible.

The traditional food delivery model is as follows: customers phone the local restaurant, place an order, and wait for the restaurant courier to deliver food to their doorstep. For many years this scheme has dominated the market, but now we are witnessing the emergence of online startups that use other business models for preparing and delivering food, taking this service to a new level.

Sites-aggregators. They act as intermediaries between customers and numerous local restaurants, offering access to their menus through a single site or mobile application. When a client visits the aggregator site, he can view and compare the menus, prices, ratings and reviews for each restaurant and even the dish, and then place the order in a couple of clicks. After that, the service transfers the order for execution to the restaurant, where food is prepared and then delivered using its own couriers.

GrubHub - One of the Most Popular Online Food Delivery Sites

Thanks to aggregator sites, customers no longer need to remember the numbers, menus and prices of all restaurants, and restaurants do not need to spend money on developing and promoting their own food delivery sites. For intermediary services, aggregator sites usually charge a fixed fee for each order made by the restaurant, so the price on the site and directly in the restaurant is always the same.

The most popular delivery aggregator sites are GrubHub, Just Eat, Delivery Hero, Foodpanda. They work worldwide, and they account for a large portion of the online food delivery market. For example, in 2015, Eat24 and GrubHub controlled more than 66% of the market (in 2017, GrubHub bought Eat24 for $ 287.5 million).

New Delivery Services. Like aggregator sites, they allow you to compare the menus of different restaurants and place orders at different local restaurants through one web or mobile application, but at the same time they also provide logistics for partner restaurants. Thus, new online food delivery services allow restaurants, pizzerias and cafes that never delivered food to their homes to enter this market. 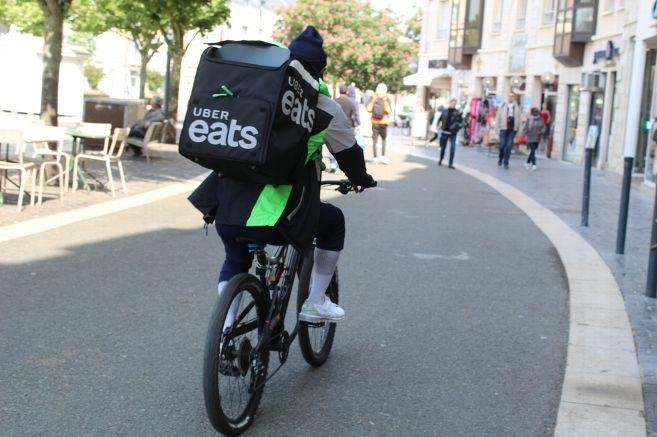 New services work according to a scheme similar to aggregator sites: as before, the client makes an order on the site and after confirmation he gets into a restaurant where, after cooking, the food passes into the hands of the courier. A courier is a freelancer who connects to the site and takes orders that are convenient for him. Courier charges are usually split between the restaurant and the client.

This food delivery model is becoming popular as:

UberEATS, Postmates, Foodpanda and Caviar work on this scheme. Thanks to them, gourmets around the world got the opportunity to order not only pizza, fast food and Chinese food, but also dishes from elite restaurants and institutions that prepare healthy, children's, vegetarian and exotic foods.

Full delivery service on request. These are cloudy (or ghostly) kitchens, which, unlike aggregators and new food delivery services, do not work with third-party organizations (pizzerias, restaurants, cafes), and instead build their own kitchens and hire cooks who work only on online food delivery. Couriers at such platforms also have their own.

Ghostly kitchens work according to the traditional model: users place an order on the site, confirm it and wait for the restaurant courier to deliver food to their doorstep. But, unlike traditional restaurants, in the cloudy kitchen, the client has a much greater choice in terms of ingredients and the way of cooking. In addition, food in cloud kitchens usually costs less, since they do not need to spend money on large halls, restaurant furniture and the salaries of waiters.

The largest cloud kitchen is Rebel Foods. It is an Indian chain that has received over $ 170 million in support from McKinsey, Coatue Management, Gojek and Goldman Sachs to build 100 new restaurants in Asia and the United Arab Emirates. The closest competitor is startup Deliveroo, which, under the leadership of Amazon, received $ 575 million in investment to conquer the world market.

Practice shows that it is better to start any project on the Internet with a limited area, and then gradually expand it as popularity grows. It’s easier to distinguish a site from competitors, get a stronger response from users and save on promotion. Food delivery sites typically target:

Region, Country. GrubHub, one of the most popular food ordering web platforms, started out with Chicago. Once the project became a regional hit, it turned its attention to San Francisco, then to New York and other US cities. GrubHub is now represented in 2400+ cities in the US and the UK.

You can go the same way: start work from one city and then expand your business to other regions. If you live in a country where there are no major players in online food delivery, it is best to start immediately with several of the largest cities in order to be the first to conquer an empty market.

Target audience. Among the busy people who more often than others order food delivery, there are three main target audiences: working specialists, parents and students. Each has its own needs of preference, which you can rely on when starting your site:

As you can see, each group needs something special, so it’s better to choose your target audience in advance in order to think about how to draw up the right value proposition, as well as determine the functions of the site.

Type of kitchen. The last way to stand out at the start is to work with restaurants that cook certain types of dishes: homemade food, fast food, seafood, etc. You can also focus on establishments of Chinese, French, Hawaiian, Ukrainian or other cuisines. Here are some interesting restaurant niches:

This approach is only suitable for large cities, where there are many restaurants operating in one niche. For smaller cities it’s better to choose a different positioning method.

Role functions. When creating a food delivery site, you should divide its functionality into two groups of users (customers and restaurants), if it is an aggregator site, or into three groups (customers, restaurants and couriers) in all other cases. Each user group should have its own set of functions. Typically, this separation is as follows: 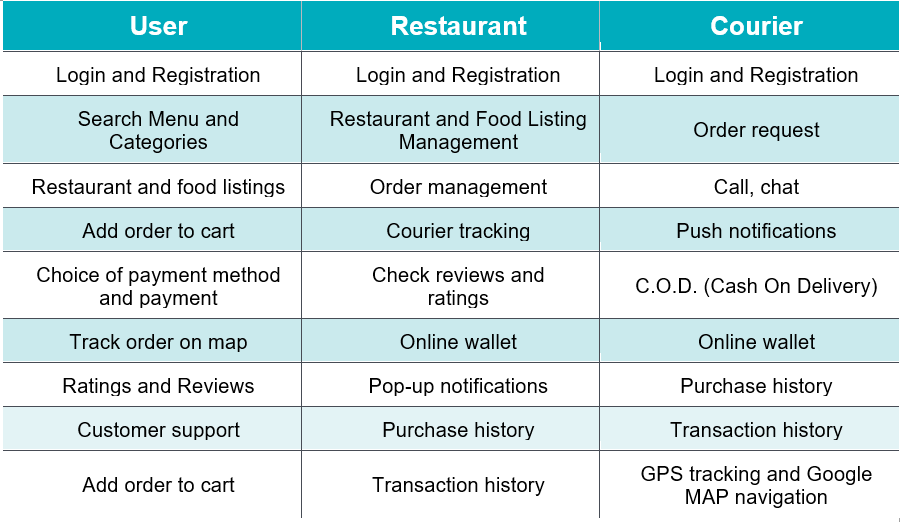 UI / UX design. When people order food online, they want to browse as simple and clean sites as possible, where nothing will distract them from the key action - ordering food. Therefore, you should not create something beyond creative or innovative. Better to focus on conciseness, simplicity and convenience.If you want to stand out among your competitors as much as possible, you can also integrate functions, for example, food delivery by drones, AR and VR elements for visualizing dishes or dish designers (the client decides what and how to cook).

Uber Eats Website is a Great Example of High-Quality UI / UX Design
The main emphasis in the design of the site should be done on listing, presentation of dishes and convenient search, as this is what interests customers.

The information architecture and database management system should be such that your food delivery site can be easily read by search engines (Google, Baidu, Yahoo, Bing and others) and application stores (App Store and Play Store). They will act as a free source of constant traffic to your site. Close integration with social networks will also attract additional traffic.

The success of the online food ordering system largely depends on how well it is adapted to the needs of a particular region. Usually here we are talking about the following things: In addition, it is possible that the restaurants in your target area do not have proper standards for cooking and delivery or a good internet connection. In this case, we need an effective team of experts responsible for registering only those restaurants that support at least the minimum level of service standards.

Delivery payment. If the restaurant does not have its own delivery service, the web service can take over this function by charging a percentage of the order value or a fixed fee depending on the distance. This method uses Deliveroo and other logistics platforms.

Commission fee. The most popular way to monetize. The fee is usually charged from the restaurant, and the rate is from 5 to 30% depending on the level of the restaurant, its average income, location and other factors. This approach is used by Just Eat, Deliveroo and others

Rush Hour Visibility. Rush Hour Visibility Food delivery services may limit the visibility of restaurants listed during rush hour, depending on their location. That is, in normal times, customers see all restaurants within a 10-mile radius in listing, and during peak hours within 5 miles. If the restaurant wants customers to see it again, then they can activate this service for an additional fee. So does UberEats.

Advertising. A food delivery site may offer advertising for restaurants at an additional cost. This may be located on the cover page of the site with good load time, at the top of the listing and / or in the recommendations. This is one of the main sources of income for Swigg and UberEats. 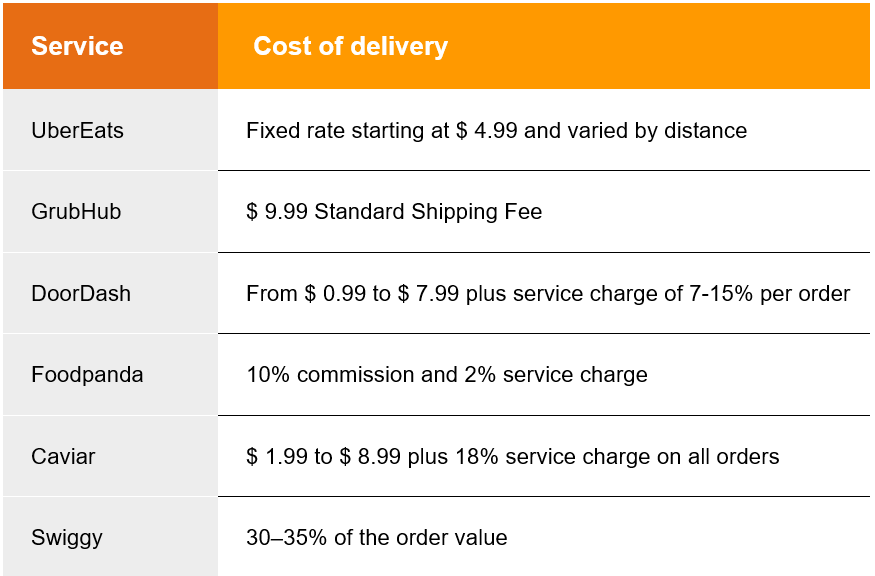 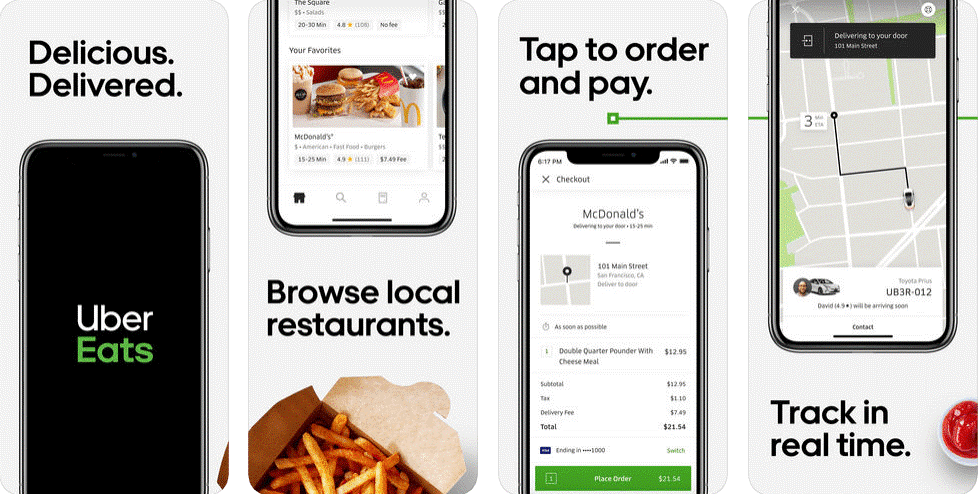 Uber Eats - The Most Popular Food Delivery App In The U.SStep 7: create a mobile application

According to a GlobalWebIndex survey, the share of foodies using mobile apps to order home-grown food has increased from 20% in 2014 to 34% in 2017 and continues to grow. In order not to lose this part of the market, you should invest in the development of an appropriate application. If you have a ready-made web service on hand, such a development will be cheaper and take much less time.

How to Build a Food Delivery Site key takeaways:

Merehead does professional development of create food delivery site. If you have questions, contact us for a free consultation.

Merehead review. Vleppo is a startup, digital asset exchange platform based on the Komodo blockchain protocol.
Category: Development 02/16/2020
How Much Does It Cost to Make a Food Delivery App or Website
Creating your own food delivery service is a great business idea. Proof of this is the success of startups like DoorDash, Seamless, UberEATS, Grubhub, Eat24 and Foodpanda. In addition, studies show that every fifth American orders home meals via the Internet at least once a week. And the share of such people is constantly growing, as the market itself. 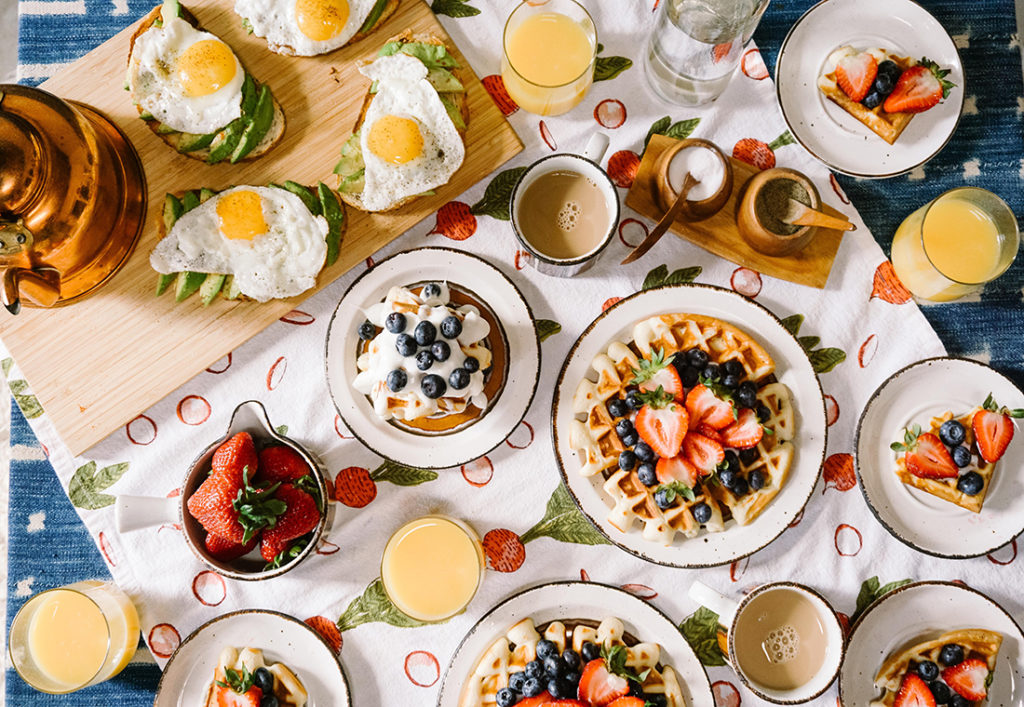 Category: Development 11/14/2021
How Much Does It Cost to Create a Food Delivery App Like UberEats or Deliveroo?
The online food delivery industry is one of the fastest growing in the world, which is evidenced by both polls (one in five Americans regularly orders food on the Internet and their number is constantly growing), as well as predictive models by Morgan Stanley, Statisa and other companies. Therefore, if you plan to create an application for online food delivery, now is the best time to do it. 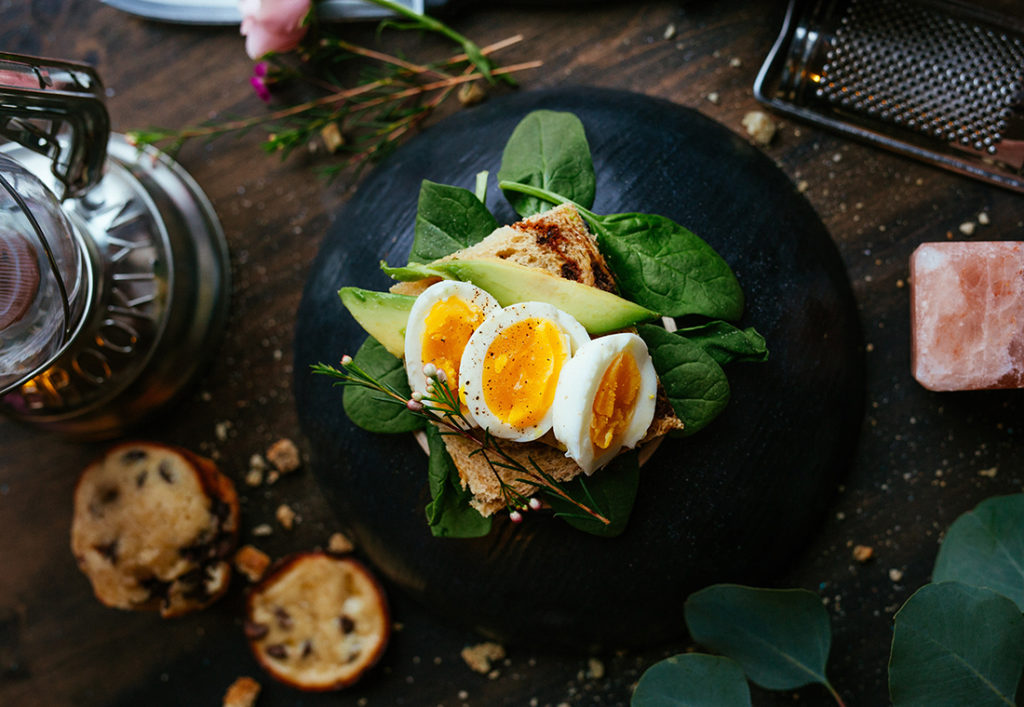 Category: Development 02/02/2023
How to Build a Restaurant App like Zomato, Postmates, UberEats, DoorDash and GrubHub
Zomato is a mobile application for finding restaurants, reserving tables and delivering food. The application is presented in 24 countries, has 50 million users and annually brings its owners $ 200 million in revenue. In our article, you will learn how to create an application like Zomato, attract the attention of gourmets around the world and monetize it. 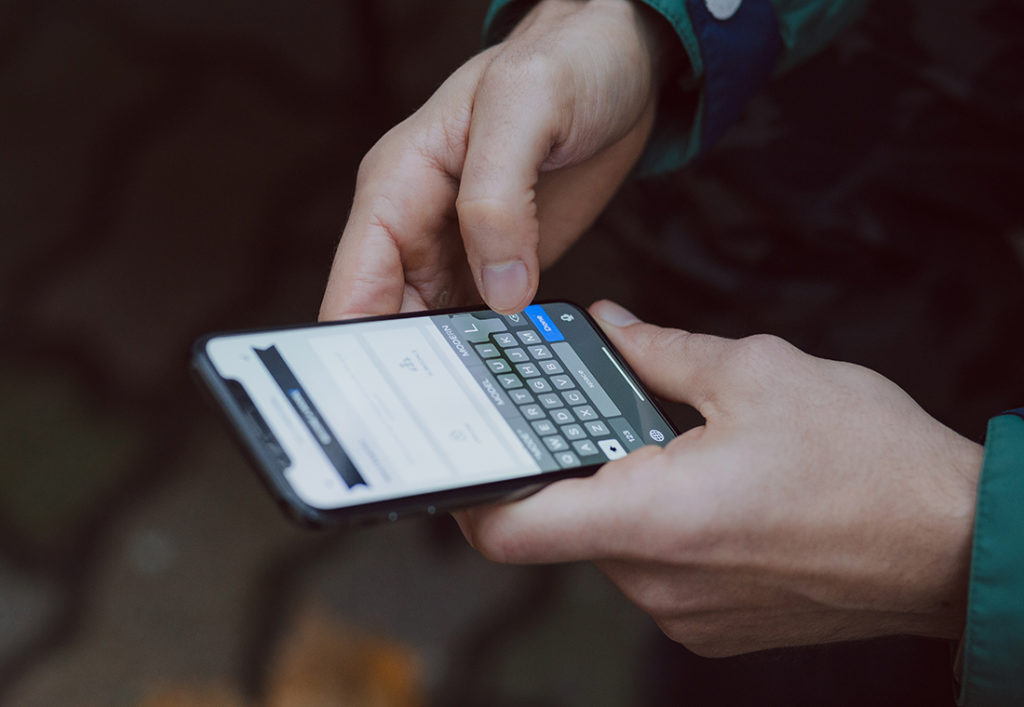