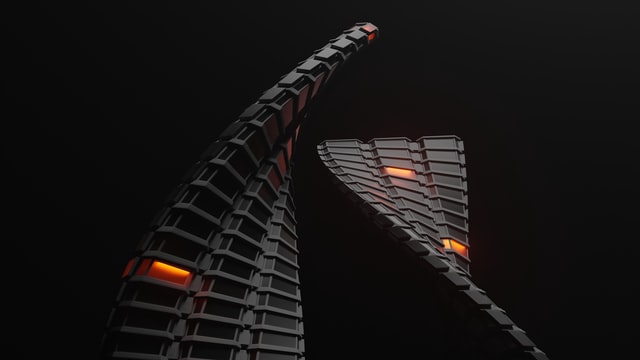 How to Use Blockchain for Cybersecurity?

Write to Yuri
Merehead / Blog / Blockchain / How to Use Blockchain for Cybersecurity?
Are there any questions?
Yuri Musienko
Write to the expert

The expenses on cybersecurity have grown significantly in the recent ten years. Furthermore, the trend will probably continue. In 2020, the cybersecurity market exceeded 170 million dollars. Expectedly, by 2027 it will grow to 400 billion. However, despite the tremendous investment, losses caused by cybercrime in 2020 were 1 trillion dollars (1% of global GDP), and by 2025 it might reach $6 trillion.

Blockchain is probably the single technology that can limit the harm of cybercrime since blockchain offers a better data map, more robust authentication, and protected edge computing. Below you will find several ways to employ blockchain for cybersecurity.

The number of malicious software on the ‘’secure’’ macOS. Source.

Viruses, worms, and trojans have different forms and often break into the computers and are hard to detect. In 2020 there were 700 million digital harms seen, and most cases were related to uploads and updates. Even macOS devices that were considered virusless became 2020 a target for about 670,000 new forms of malicious software.

The malefactors learned to hide their aggressive software and ransom application, and the problem worsened. The ban on downloading suspicious and unknown programs/extensions partially saved the situation. Still, hackers have become so sophisticated that another measure is needed to isolate our computers and smartphones from malicious software.

Blockchain technology can become the right solution since it allows writing unique hashes for downloads and updates in a secure database that is barely impossible to hack or change. This allows the users to compare the hash of the file they download with the developer’s hash to reduce the threat of infecting their operating systems with secret malicious software.

A distributed denial of service (DDoS) attack happens when the system is overloaded with servicing inquiries: a massive volume of traffic and specific information that the network can’t manage. As a result, the network functions slowly; it crashes or stops altogether. These attacks are typically targeted at personal information or hostage detention for ransom purposes. Frequently, DDoS attacks are employed for cyberterrorism or attacking competitors.

Furthermore, this type of attack is likewise bulling. DDoS targets are high-class organizations like film studios, banks, government agencies, etc. The malefactors start the attack to show their mightiness and laugh over the whole thing. ISIS is the real-world equivalent for these hackers.

Moreover, software for DDoS attacks keeps developing. For example, Hide and Seek can continue the attack even after rebooting the system, which means it will restart the system crash again.

Not only that, but these attacks have become more frequent. More precisely, the number of DDoS attacks in recent years grew three-fold. Along with Internet of things development, DDoS has become even more efficient since it affects several connected networks.

Yet, there is hope. Several startups claimed they’d developed a reliable DDoS attack protection mechanism on blockchain-based distributed networks. Moreover, the tool connects businesses and individuals to the DDoS protection service and helps lease available bandwidth to support the overloaded networks. As a result, the network is less vulnerable to DDoS attacks.

Here is the company that works on solving this problem: 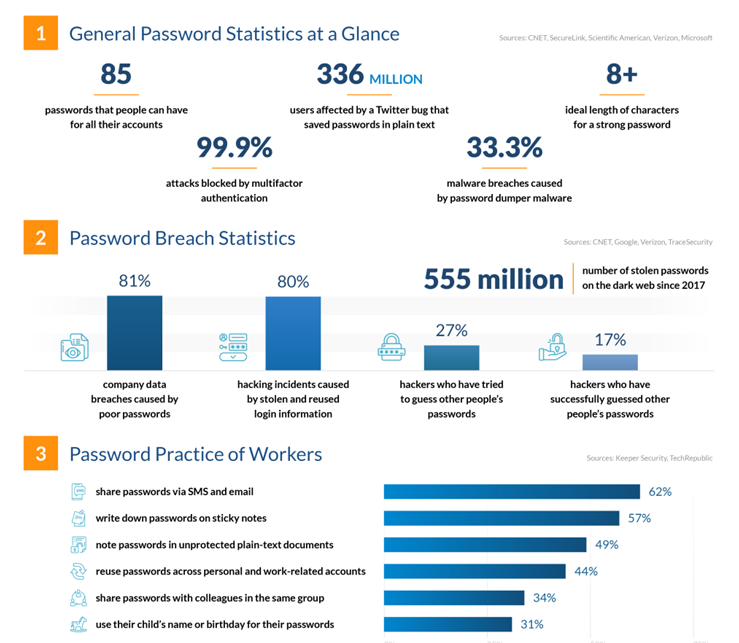 Essential statistics on passwords. Source.
Depending on the source, you will receive various data in the percentage of the week and vulnerable passwords. Yet, everyone will agree that the sole idea of passwords is an abysmal security level for any device or software. For instance, you can buy confidential personal data of 1.5 billion Facebook users that were stolen by simply picking and phishing passwords.

The weakness of passwords is that:

According to Thycotic, the security specialist are not an exception: only 50% of them changed their social network password in the recent year, and only 20% never changed it. In fact, even if you change your password regularly, an ordinary hacker will get it one way or another. Picking a password is not about a chance; it’s about the time spent: a complex password requires more time or computing power.

According to Ponemon Institute, about 55% of regular users and IT professionals would like to use an alternative protection method for their accounts. They require a more straightforward yet secure solution.

Blockchain authentication can become the alternative solution people need. Some projects allow creating an account in their system and then using that access key for other systems and software. The process is similar to using Facebook and Google accounts for Spotify or Netflix log-in.

Despite Facebook or Google, blockchain doesn’t require passwords since it employs private keys, multistep authentication, and biometrical data to verify a user’s identity. These systems are secure and much less challenging to use.

The companies working on these solutions are:

The development of intelligent devices and other autonomous technologies makes us more mobile and allows automatizing of routine processes. Yet, the losses caused by hacks and data compromises are now unprecedented. Hacking Amazon’s Alexa or getting control over drones in Ukraine are vivid examples of considerable gaps in security.

The more intelligent devices you have, the easier it is for the hackers to breach your security since they can choose the target, and most of their targets will not have cyber threat protection. It’s not just a prediction, and it will definitely happen Senrio security company showed the case of breaching an apartment or office by connecting to a smartphone or security camera network. Furthermore, the privacy of your network doesn’t matter since the hacker can use an average drone to access your local network.

Anyway, do not despair since you can protect your smart devices if you employ a blockchain-based system. It is impossible to hack since it will require hacking 50% +1 devices within the system to get control over it. Furthermore, blockchain perfectly does the job it requires verifying inauthentic or potentially harmful commands and input data, which are the most significant gaps in the security system of intelligent gadgets.

The companies that try to solve this issue are:

Most popular DNS attacks. Source.
DNS stands for Domain Name System. It functions like a phone book that links the website and the IP address so users can visit the website. Unfortunately, DNS is only partly decentralized, so the hackers can use the IP address and website connection to disable the website. As a result, numerous internet sellers and online outlets globally lost their clients due to temporary deactivation caused by DNS attacks.

According to Neustar International Security Council research from September 2021, 72% of research participants claim that in the recent 12 months, they suffered from DNS attacks. Typically these are:

One can protect from these DNS attacks with a decentralized blockchain that will host the DNS system. It will eliminate vulnerabilities that are common for all centralized systems. Hacking a central server (even the most protected one) is more manageable than a blockchain of thousands of P2P nodes.

The projects working on solving this issue are:

The price of users’ data by category. Source.
Data is a universal currency. There is no nation, not counting remote Amazon villages, in which a person's data cannot be used in some way, for example, to control consumer behavior. This is why marketers pay a lot of money for data, and a piece of user information usually costs $240 a year, and the price grows if the user’s expenses grow. For the same reason, hackers hack into services from which you can't take anything but marketing user data. The hackers trade it.

Storing these data in a centralized database is, put mildly, not secure. Yet, neither businesses nor users understand why there is news that a company’s database was hacked each week. Furthermore, if you are unlucky, you will receive an email that your account was hacked and your data could be stolen.

If they employed blockchain for decentralized data storage or at least decentralized authentication, the quantity and scale of data leaks would reduce. The advantage of blockchain is that instead of a single door protecting the entrance to the storage, it has numerous users’ doors that make decentralized storage significantly more secure.

The projects trying to solve this issue:

According to Ben-Gurion University research, most edge devices can be hacked in 30 minutes through a simple search in Google, especially if these devices are cameras, calls, thermostats, or baby monitors. 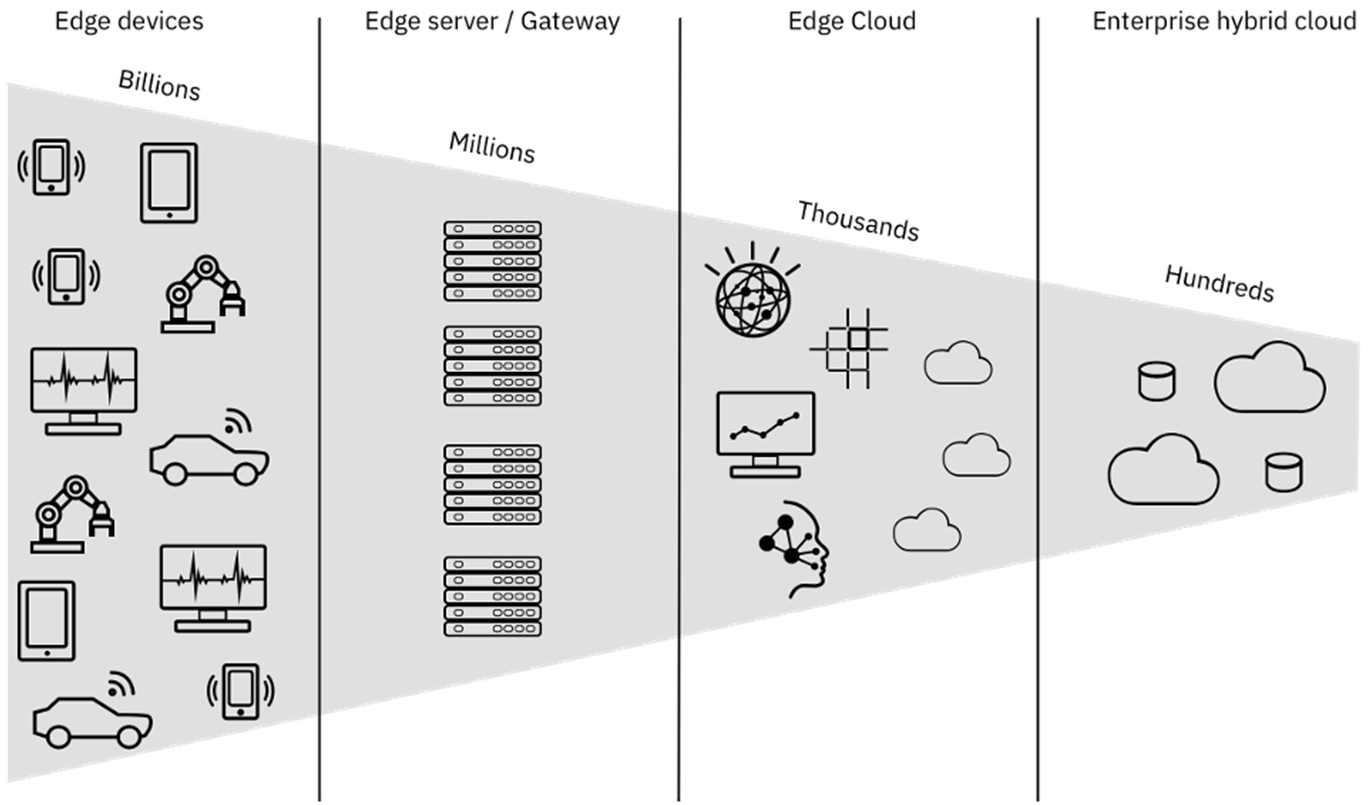 Edge devises explanation. Source.
An edge device provides an entry point for basic networks: enterprise, providers, or home, for example, router, integrated access devices, or smartphones that you use to connect to all networks.

An excellent example of this hack is an employee that enters the company server through his unprotected mobile phone. In this case, it is a piece of cake for the hacker to breach the entire network.

How to protect yourself from it? We must ensure that devices and the underlying network are isolated with multistep authentication processes and decentralized blockchain-based protocols.

Projects attempting to solve this problem:

About 360 million usernames and passwords from Myspace accounts were stolen and put for sale. You might think that no one cares if someone hacks an account with photos and playlists. Yet, the users often use the same password for social networks and online banks.

The blockchain typically employs public and private key models and multi-signature authentication. As a result, users have crypto keys instead of passwords. This is a more secure way to access accounts, websites, and applications. Also, it will significantly drop the number of hacks by providing better protection to valuable private user data.

Projects attempting to solve this problem:

Access to the entry points into the firmware that allows networks to operate without detection is a target for hackers. The foreign agents who create the technology could make it much easier to infiltrate these systems structurally. Understanding who created the firmware and where they produced it would not only allow better control over purchasing decisions but would also help with investigations in the event of a hack and its prevention.

The ability to prove where a device was manufactured is one of the essential benefits of blockchain-based logistics platforms, as they can provide immutable records of manufacturing history (individual parts and their assembly into a finished product), transportation, and packaging.

False positives cause headaches for customers and additional costs for companies. According to one study, false alarms cost businesses about $1.3 million yearly and more than 21,000 hours of lost time. And these false positives are mainly due to outdated algorithms and security measures, which hackers often use for illicit, mercantile purposes.

Blockchain can significantly reduce this problem, as data passed (filtered) through a decentralized blockchain network tends to be more trustworthy because the security of multiple nodes provides better verification and prevention of unauthorized access than in centralized, single-source networks.

How to Use Blockchain for Cybersecurity? key takeaways:

Merehead does professional development of blockchain for cybersecurity. If you have questions, contact us for a free consultation.