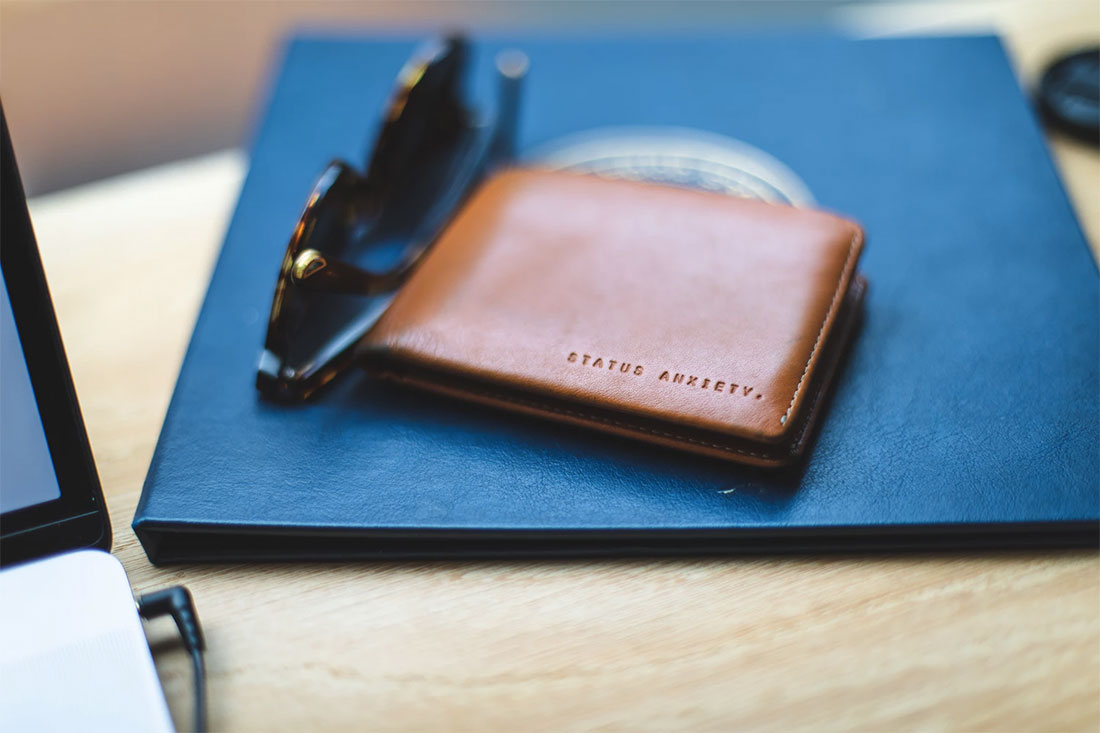 What are the Salaries of Blockchain Developers

Write to Eugene
Merehead / Blog / Blockchain / What are the Salaries of Blockchain Developers
Do you have any questions?
Eugene Tarasenko
Write to author

I think it’s no secret that people working with the blockchain earn big money in the new information technology industry.

The most reputable international banks for more than 3 years have been studying and introducing the technology of building a chain of transaction blocks into their activities. According to the report of the World Economic Forum study, the total amount of capital directed to this sector amounted to 1.4 billion dollars over the past three years, it is more than, for example, insurance.

A couple of years ago, Mizuho Financial Group, a reputable financial holding company in Japan, made a statement about the start of the project, which uses Microsoft Azure and works as Blockchain-as-a-Service.

In mid-2016, four of the most authoritative international banks, UBS, Deutsche Bank, Santander and Bank of New York Mellon, announced that they are developing a new electronic currency based on blockchain technology, which greatly surprised international investors.

Banks will pay each other with cryptocurrency funds in order to maximally optimize the transaction process. The cryptocurrency is called utility settlement coin. Its commercial use began in 2018 and has received the most positive responses over the past six months.

Here are just a few areas for which the blockchain technology is viewed by the world community as a vital necessity (this list can be continued, but the most important ones are listed here):

1. Banking and stock market. The implementation of the blockchain will allow you to safely store data, detect fraudulent schemes in advance, make financial transactions without arbitrators, increase transaction speed and reduce commissions.

2. Logistics and supply. The introduction of the blockchain will provide an opportunity to track the entire path of the parcels, which reduces the possibility of cargo loss.

3. Insurance. The introduction of smart contracts that unfold automatically upon the occurrence of the insurance condition. This will increase returns in this area.

4. Copyright. Due to the immutability of the blockchain structure, it will be possible to easily determine the copyright of intellectual content, which will reduce the possibility of theft of someone else’s property.

5. Energetics. Blockchain technology reduces the costs of reports and infrastructure so that even small owners of solar panels will be able to sell their electricity very profitably.


Who is a blockchain developer?

From the very beginning of the development of trade, people registered exchanges of various services and goods. Thanks to the digital world evolution, transaction recording has become quite complex. World trade is growing rapidly, creating a network too vulnerable for abuse, error, and fraud. Modern supply chains use intermediaries such as government, banks and dealers, and all to ensure safety and reliability. This adds additional costs and therefore increases the cost of the final products.

Processes such as smuggling prevent officials from collecting export taxes. This is where blockchain technology can help people solve the problems mentioned above. Due to its unique capabilities, the public blockchain offers transparent transactions resistant to various vulnerabilities.

People who create “magic” innovative systems are called blockchain technology developers. They are able to create a system that provides secure and synchronized records of information. Some people call these specialists “unicorns” because of working with sophisticated technologies, but they do not do anything unusual.

This is due to the fact that many people still do not realize how the blockchain works; they consider bitcoin developers to be very smart people. Let's find out what these people actually do.

Bitcoin was invented 10 years ago, but the development of blockchain innovations has only just reached the level of fever over the last couple of years, especially after the launch of Ethereum in 2015. Most of the progressive companies and ideas in the blockchain industry were built on Ethereum, despite the fact that this technology is still very immature. In spite of this, if you start to develop in this branch of information technology, in a few years you can really become a world-class expert. New innovations in the blockchain sphere are not so complicated, so if you start now, in the future you will be able to earn big money.


What skills in the blockchain industry are in demand? 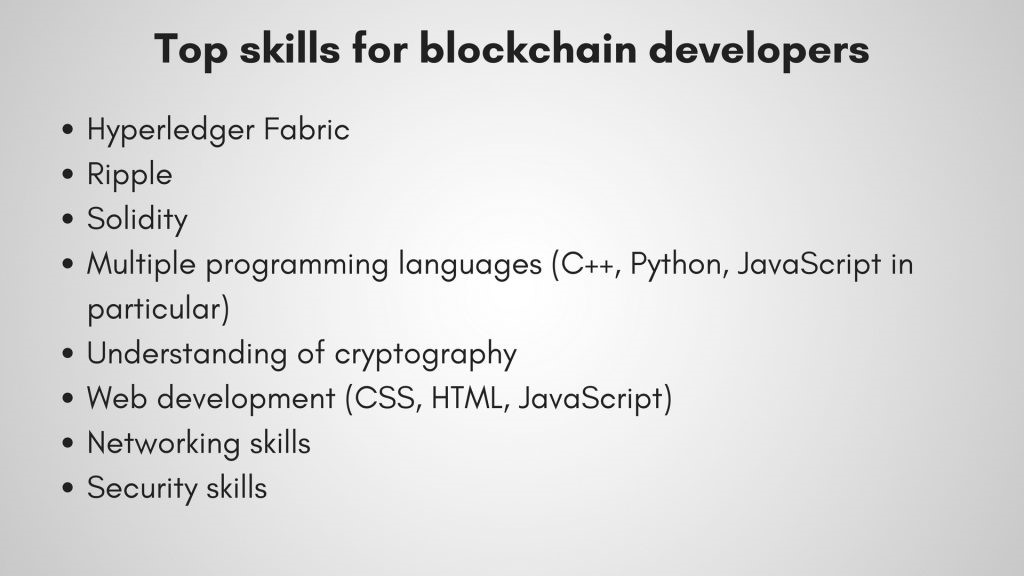 I think it’s not a secret to anyone, the demand for blockchain developers is growing rapidly, and this is all due to the increasing popularity of the new technology. Nevertheless, blockchain is a wide area where a large range of skills is needed, allowing one to be considered a successful developer.

According to Toptal, most companies are looking for employees who understand the three core competencies. The first skill is the implementation of a modular architecture in blockchain based on Hyperledger Fabric. The second is the Ripple technology development skill. And the third is the development of smart contracts with Solidity.


The difference in professionalism between blockchain developers

Like any other new technology, blockchain has added a list of new professions to the IT world. At least three new and major specialties should be distinguished:

Blockchain developer - a person who must have experience in creating mobile and web applications.

Smart Contract Developer - expert developing intelligent contracts. This profession is analogous to a professional in the field of web development (JavaScript or Python).

Most developers say that theoretically a blockchain project can be built using any programming language. However, C++ is considered the most popular for this purpose. Developers who write code in their native languages, using different structures and having knowledge of mathematics and algorithms, are more likely to find jobs with good prospects than those who have poor knowledge in this field.

Seamus Kushli from PwC noted that a potential blockchain engineer must have a strong technical knowledge base, be interested in new technologies, and want to improve in the blockchain industry.

Zeith Couceiro from Opus said that potential blockchain developers should feel comfortable working with several programming languages at the same time and have good knowledge of cryptography. You need to know C++, as this programming language is very often used when developing platforms based on Bitcoin and Ethereum (although Ethereum uses Python). If you need a smart contract developer, he needs to know JavaScript and Python, and also be ready to learn Solidity, because Ethereum smart contracts work on it. 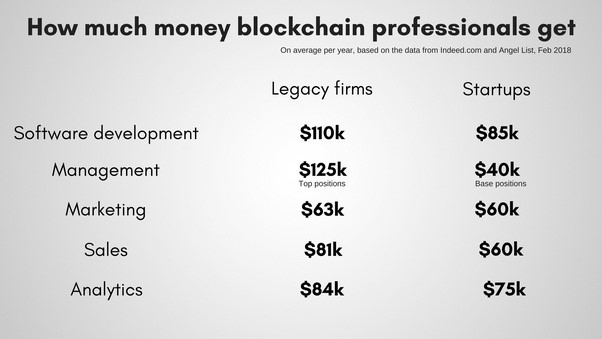 Salaries vary from company to company or from sector to sector, and also depend on the country in which the organization is located.

Information about the blockchain developer's salary consists of a set of data collected directly from employees, users, and past and current job ads for the last 36 months.

Computerworld estimates that the average income for blockchain developers in the United States is $ 130,000 per year. For comparison, common software developers on average receive $ 105,000 per year.

In the high-tech regions of the United States, such as Silicon Valley, New York and Boston, the average annual salary of developers of blockchains is 158 thousand dollars per goal, while software developers receive about 140 thousand dollars. We are talking about staff in American companies.

Specialists who are not official employees offer their services to a freelancer from $ 150 per hour. At the same time, software developers earn up to $ 100 per hour. Such data was published by Matt Siegelman, CEO of data analysis company Burning Glass Technologies. 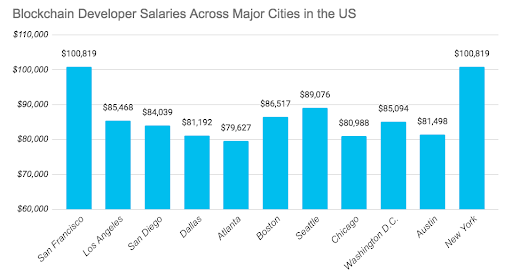 In prosperous Switzerland, blockchain developers get even more than developers in the US, from $ 120,000 to $ 180,000 a year, all thanks to the active development of ICO, cryptocurrency and the government’s attraction of investors to this industry.

Blockchain consultant can easily earn from 50 to 150 thousand dollars a year. Software developers can easily earn $ 110,000 a year, while a junior software developer earns about $ 90,000 a year. Management sector managers receive from 101,000 dollars to 157,000 sales, sales managers from 60 to 81 thousand dollars a year, analysts from 75 to 84 thousand a year.

In India, blockchain developers get between 19-21,000 per month.

Depending on technical competence and position, most companies pay in the range of $ 40 to several hundred dollars per hour. Most often, developers with 1 year of experience earn $ 40, with 3 years of experience - $ 200. 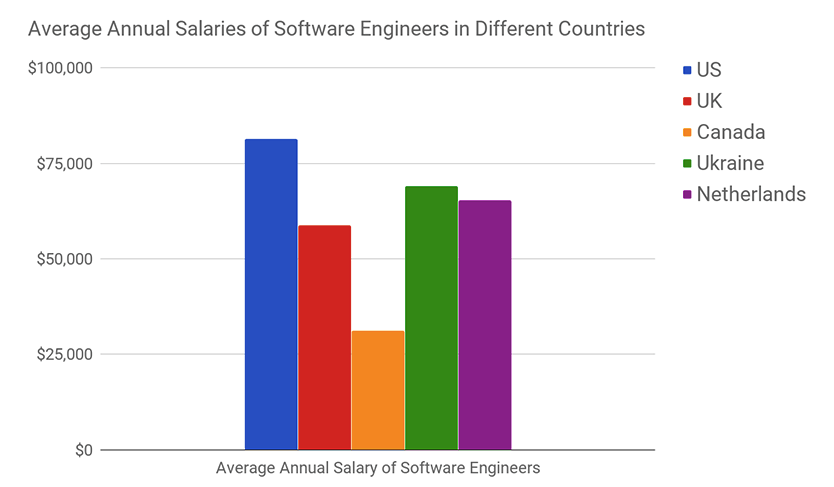 According to the director of PwC FinTech, the number one problem facing the blockchain industry is the lack of great talent.

"An experienced blockchain developer can earn from $ 220,000 a year," said entrepreneur Jered Kenna.

“The demand for blockchain developers is growing very fast. Sometimes they get five job offers per day”, - Condrat Sequel.

Development of Blockchain takes the leading place among the most demanding programmer skills. According to the analysis of Upwork for the end of 2017 and the beginning of 2018, the blockchain technology was the second among the most popular skills in the labor market (specialists in the field of robotics were in the first place) in the world (there are higher wages for developers of the block chain). Such an agiotage is easy to explain. The popularity of blockchain technology brings profit in business and finance, and the number of companies using blockchain is growing rapidly. In addition, it should be noted that the introduction of blockchain technology in classic financial sector companies such as Bank of America, Visa and others.

Large companies and startups are very actively looking for developers and architects in the development of blockchain technologies in the US, Europe, China, Australia, but finding a real professional in this area is often a big problem. During the last quarter of 2017, the season of technological discoveries for blockchain technologists continued.

The study of Matt Siegelman (an analyst from Burning Glass) regarding the demand for blockchain developers led to the following conclusion: “Six years ago, in 2012, we could only find a few vacancies requiring blockchain skills. By 2016, that number had grown to 1,838 posts, and in mid-2017, more than 3,900 posts were made. This is 115% more than in 2016. In 2018, the number of vacancies increased several times. ” This analysis suggests that the demand for blockchain developers is growing every year.

According to LinkedIn, the number of vacancies related to blockchain development, cryptocurrency and ICOs has increased at least four times in 2017. More than 150,000 vacancies about blockchain developers have been published only on Linkedin in the USA. In addition, among these vacancies there are positions for executives of companies, software developers, co-founders, technology directors, founders, advisors. 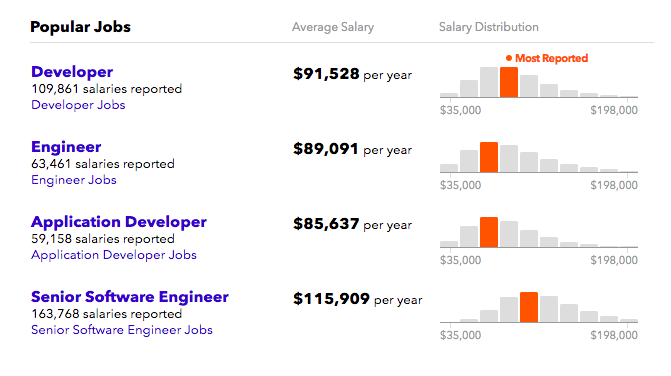 The web developer must have experience with open source projects. Experience with Github is the best example of a project using open source. Profound knowledge of C ++, Go, JavaScript is a huge advantage for blockchain developers.

A developer’s chances of finding a good job increase if he can code in his native language without frameworks. Basic knowledge of mathematics and algorithms is required. Interesting fact. Most often, in order to get a job in an American company, you must present a diploma in mathematics or computer science.

Non-regular employee: from $ 35 per hour.

Full time - up to 100 thousand dollars per year.

Payment for the project: from 2 thousand dollars.

Full time - up to 110 thousand dollars per year.

Payment for the project: from 3 thousand dollars.

Full time - up to 120 thousand dollars per year.

Payment for the project: from 4 thousand dollars.

Full time - up to 150 thousand dollars per year.

Payment for the project: from 3 thousand dollars.

As we can see, blockchain developer is a very prestigious profession, having mastered that, you will be able to forget what poverty is. The market of specialists is still not formed, so it is still easy to enter the industry, not to mention the future SEO 2020. It will become more difficult to enter this sector quickly and confidently, the market will be increasingly saturated with new specialists.

Developers working in companies, especially large ones, earn more than non-regular employees, freelancers. This must be considered.

What are the Salaries of Blockchain Developers key takeaways: