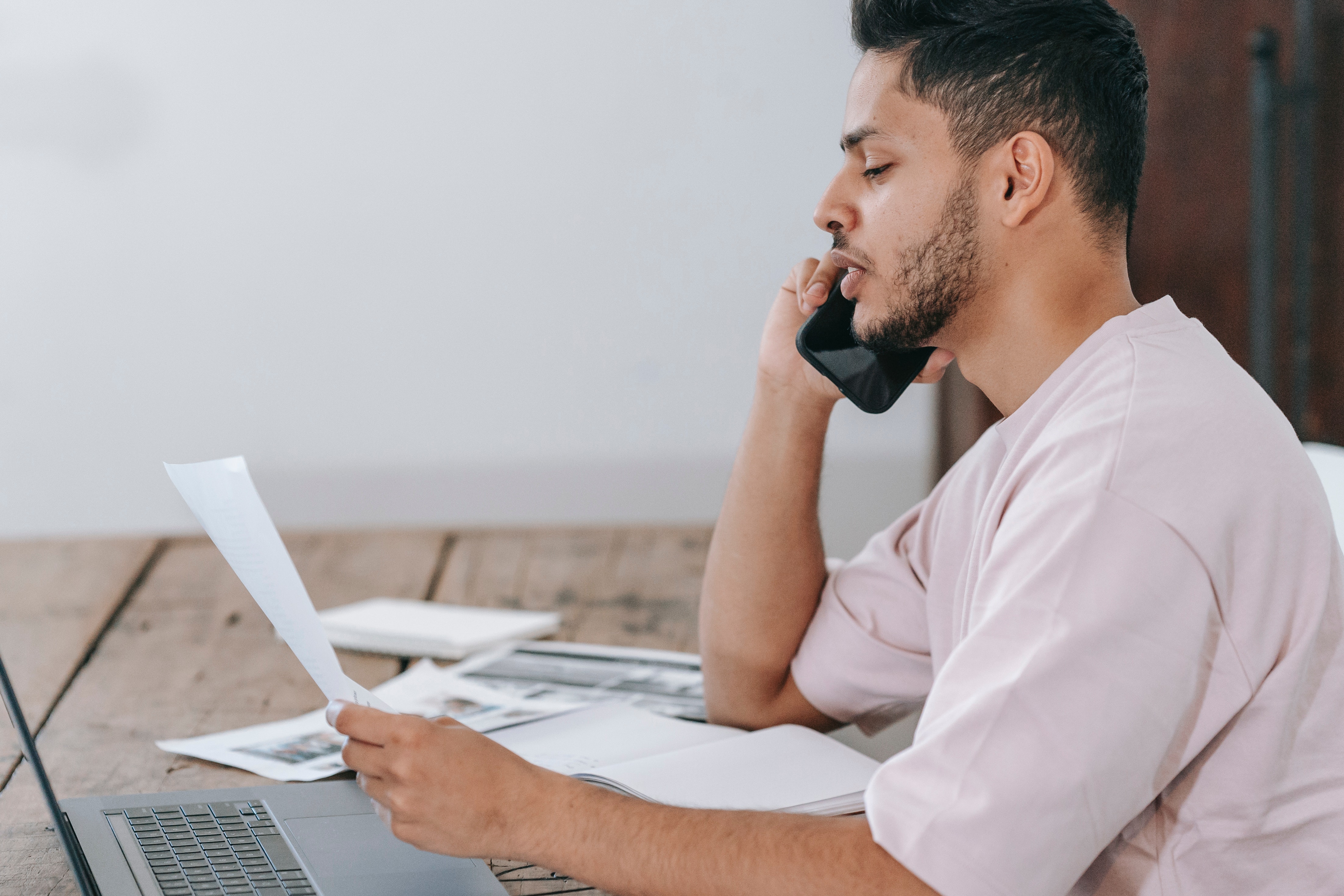 Write to Alexander
Merehead / Blog / Trends / IDO (Initial Dex Offering) Future Trends
Subscribe to our newsletter
You are the rock.
Thank you!

We will tell about what IDO (Initial Dex Offering) is, its pros and cons, and how the new model differs from ICO, STO, and IEO. We will also outline the future of IDO.

IDO (Initial Dex Offering) is a new crowdfunding model in the cryptocurrency market, which became quite popular in 2020 amid the growing interest of DeFi. In this article, we will explain in simple words how this model works, how it differs from both ICO and IEO. We will outline the advantages and disadvantages of IDO, as well as evaluate the perspective of the new way of the crowd sale.


What Initial Dex Offering is

IDO is a fundraising method where crowd sale is mediated by a decentralized stock exchange using liquidity pools, through which traders can easily and quickly buy new tokens on DEX. Liquidity pools are trading pairs of common cryptocurrencies and stable coins, such as USDT / ETH. Thanks to them, traders can quickly switch between crypto-assets and stable coins depending on market conditions. And since the volatility of stable coins is negligible, it reduces the risk of losing your investment due to extreme volatility in the cryptocurrency market.

At the same time, as in the case of ICO, IDO has minimal requirements for investors and developers (often there are none at all). That is why this way of fundraising has become very popular among DeFi projects in 2020. And unless the regulator interferes again, IDO is likely to become a new trend in the world of cryptocurrencies.


Evolution from ICO to IDO

While the standard model for raising capital in stock markets is the IPO (Initial Public Offering), everything is more mobile in the cryptocurrency market. We have a market constantly evolving, moving from one model to another (more developed): ICO (Initial Coin Offering) in 2017-2018, IEO (Initial Exchange Offering) in 2019, and IDO (Initial Dex Offering) in 2020. We can call this the evolution of crypto crowdfunding.

ICO — beginning. Initially, crowdfunding for early funding of blockchain startups took place through the ICO. With this model, anyone could start selling their tokens to anyone who wanted them. The token-seller did not need to disclose his or her identity, present a finished product, prove his or her qualifications, or otherwise prove that he or she was a reliable developer and that his or her project was a profitable investment. It was enough just to create a smart contract to sell his tokens for Bitcoins or Ether.

Such easy access to investments attracted interest and money to the ICO market, but at the same time, the lack of any control and requirements was also the main reason for the growth of fraudsters. Thus, according to a study by Satis Group LLC, in 2018 more than 80% of all token sales on the ICO market were scams. When investors realized this problem, they began to engage regulators and file lawsuits against the token-sellers and even those who advertised them.

STO — regulatory arrival. As a result of such movements, the regulators intervened (most notably, the SEC) which required blockchain startups to comply with the laws on the issuance and distribution of the securities, since almost all tokens are digital securities (security-token). Many projects have agreed to this requirement. At the same time, they began calling their crowdfunding campaigns STO (Security token offering) to disassociate themselves from the tarnished reputation of traditional ICOs.

STOs became a new trend for a while, but it did not last long, because it turned out to be very difficult to register a project according to all the rules, and only accredited investors and/or investment funds could participate in STOs - all this limited the flow of investment, and therefore the search for a new mechanism for early financing of startups began.

IEO — a new strategy. The result of these searches was the IEO model, a kind of cryptocurrency crowd sale in which all the responsibility for providing the infrastructure for issuing, selling, and most of the marketing falls on a centralized cryptocurrency exchange. This is quite convenient, but to conduct such a token sale, the startup needs to be verified. The verification process for a new project is similar to what happens with any other coin listing: the trading floor studies the white paper, the yellow paper (technical documentation), the experience of the development team, the demand for the project, and its investment attractiveness.

In contrast to ICO, in which the project team is responsible for everything itself, in IEO a huge part of the work is undertaken by the stock exchange: it already has the necessary infrastructure for the launch, the audience, advertising channels. In return, it takes a fee for the listing and receives the commission or coins of the project. Moreover, the exchange often also receives the exclusive rights to trade the new token.

IDO — a new trend. High costs, the inability to trade on other exchanges, and often not entirely transparent requirements for projects were the reasons why many developers did not like the IEO model. In addition, both startups and investors also did not like IEO's dependence on centralized exchanges, which goes against the idea itself of cryptocurrency and blockchain — decentralization.

To level out all these drawbacks, it was decided to do the same, but on decentralized cryptocurrency stock exchanges (DEX). That's how the IDO model came about. It means that any DEX user can start his IDO. You just need to activate the appropriate contract, register a new token and provide the pool with liquidity. In essence, it is the same ICO, only a blockchain startup does not need to create infrastructure for selling its tokens and take care of adding them to the cryptocurrency stock exchanges listings — DEX does all that.


How Initial Dex Offering is conducted

IDO can be launched on decentralized exchanges such as Binance DEX, Polka starter, and Uniswap. And such a crowd sale can be launched either completely independently or using various automation tools, such as the Binance DEX AI system. The algorithm of IDO is usually as follows.

Step 2: decentralized generalization. Then the project is sent to the DEX startup platform, where it must be verified and selected by exchange users, a special group of people, or an external auditor. If the project is approved, it goes to the launchpad-exchange — platforms on which startups can raise capital. The validation is necessary to protect against spam by trash IDOs and an outright scam. For example, on the Polkastarter platform, the application process is controlled by the Polkastarter team and the Polkastarter supervisory board, which includes members of Huobi, Polygon, Alchemy, and other investors and crypto-enthusiasts.

Step 3: presale (resale). Initially, liquidity is supplemented by financial resources from early-stage sponsors and venture capitalists. They are offered to buy new tokens at a slightly reduced rate so that they take an early risk with the hope of a big payoff later on. To participate in the presale, you usually need to be registered on the whitelist and sign up for the startup's social networks. Sometimes getting on the whitelist is done through a lottery.

At the same time, in contrast to ICO in IDO, investors do not buy the startup's tokens, but special token debt receipts at this stage and the public sale stage. Investors will receive the tokens themselves during the token generation event (TGE), which usually takes place shortly after the completion of the Initial Dex Offering.

Step 4: public sale. It is held on decentralized crypto stock exchanges. In contrast to ICO, where the capital raised was almost always ETH, in IDO the capital is raised through a combination of ETH and stable coins (USDC, USDT, and DAI). The public token sale itself is usually done in one of two ways:

Step 5: token listings on the cryptocurrency stock exchange. After successful completion of IDO and conducting TGE, the token is put up for trading based on the automated market makers (AMM) such as Uniswap or Balancer. And since these are decentralized trading platforms, listing new tokens does not require any additional fees or permissions. The emitter simply has to create a liquidity pool using its tokens and a portion of the proceeds from IDOs (or other sources). In this way, the emitter will launch a liquid secondary market for its token.

Step 6: liquidity stimulation (not necessary, but important). Some projects, after listing their token, create incentives to attract people to their ecosystem. In the most popular form, special programs allow users to earn tokens by performing certain actions, such as becoming a liquidity provider and/or system validator.

Advantages and disadvantages of IDO

As with everything, Initial Dex Offering has its advantages and disadvantages. Let's take a closer look. Here's a brief description of the advantages of IDO: Although IDO has many positive aspects, this crowdfunding model also has its drawbacks. Let's look at them in more detail:

As in the case of ICO, STO, and IEO, in IDO the main success factors of the token sale are the quality of the project and marketing, but in the new model, the probability of success itself is much higher. Moreover, marketing is often more important than the prospectively, readiness, and usefulness of the startup, as the advertising can create the appearance of all that. But these are the exceptions. If you have a finished product (MVP, demo) and it solves some users' problems, then its IDO will be successful. 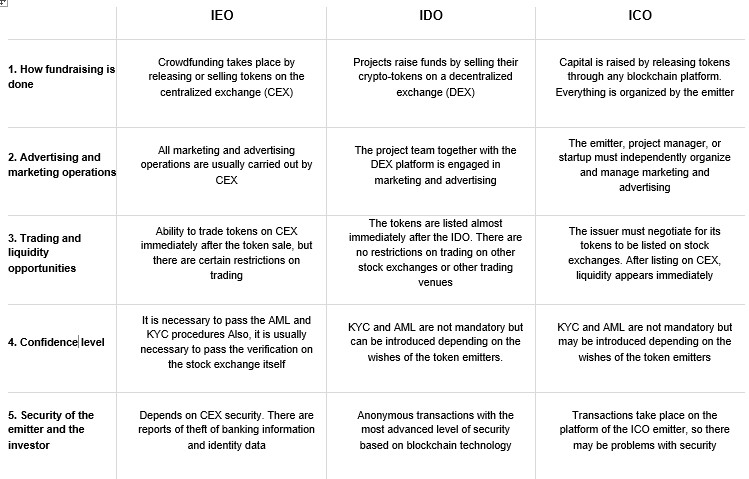 Why do traders prefer IDO to IEO

The main reasons why cryptocurrency investors prefer to invest in IDO rather than IEO are affordability and security. Affordability, because anyone with any amount in hand can buy tokens during IDO and there is no need to go through any additional verification. In addition, in Initial Dex Offering there are also no restrictions related to the jurisdiction of the investor, while in Initial Exchange Offering they may be present.

Regarding security, in the case of IDO, the investor does not have to transfer his funds to the internal accounts of the exchange. All transactions are conducted via smart contracts, which provide p2p-transfers. DEX here acts only as a provider of these smart contracts. The platform does not store the user's money, private keys, or other important confidential data.

In addition, IDOs are decentralized finance. In the world of cryptocurrencies and blockchain, such projects have much more support than projects that are fully controlled by companies or banks.


Can IDO replace IEO and ICO?

Initial Dex Offering has emerged as a solution to the major problems of ICO, STO, and IEO. Due to its decentralization, greater accessibility, absence of fees, and additional commissions, the new token sale model could become a standard in the cryptocurrency market. But only if IDO manages to solve several important problems related to ensuring equal access to the token sale for whales and small investors and protecting against Pump and Dump type schemes. If these things are solved, IDO will replace IEOs and ICOs pretty quickly in the future.