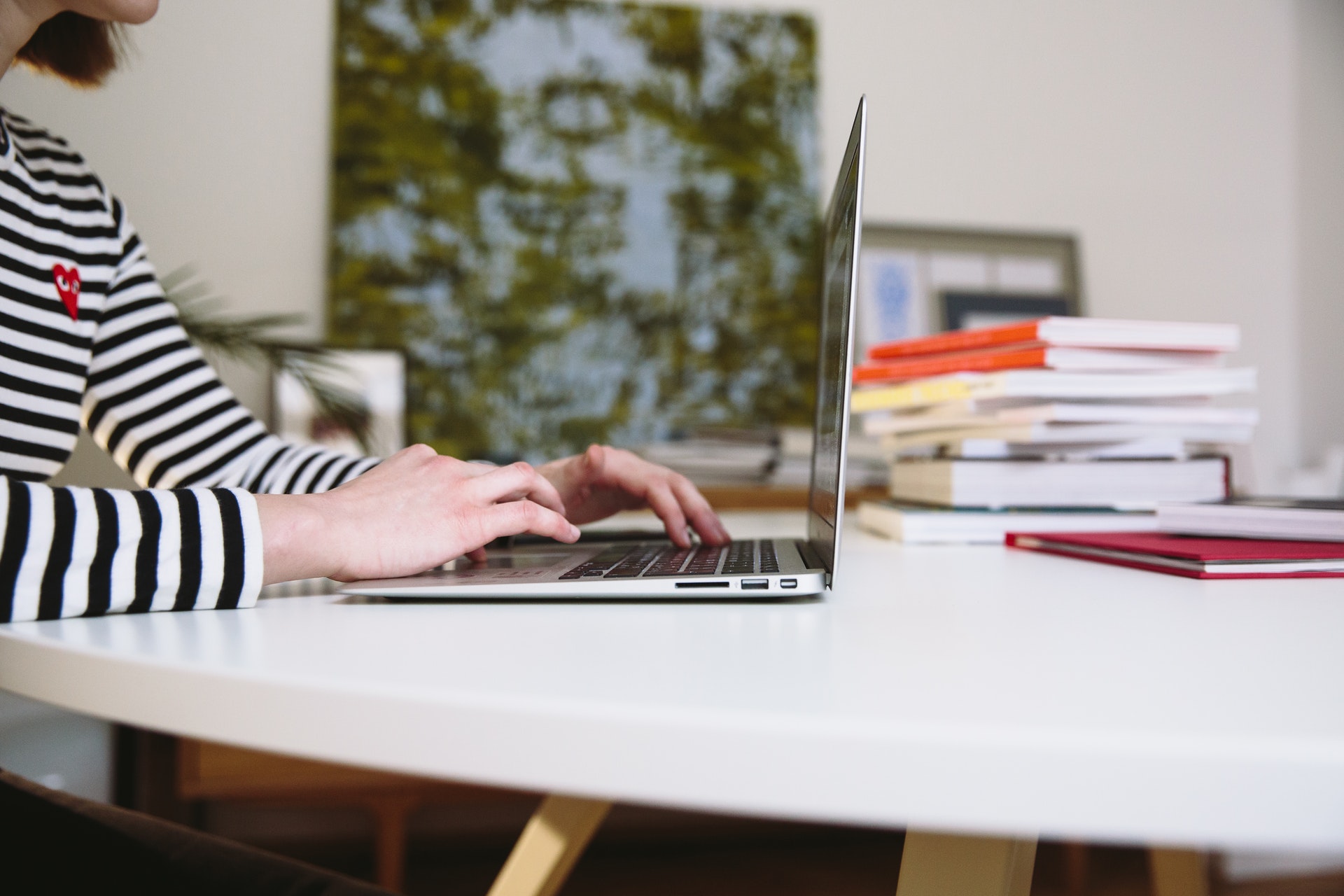 How Much does it Cost to Create an Evernote Clone?

Write to Yuri
Merehead / Blog / Development / How Much does it Cost to Create an Evernote Clone?
Are there any questions?
Yuri Musienko
Write to the expert

From this article, you will learn how much it costs to create a clone of Evernote – an app with an extremely simple and user-friendly interface for taking notes, which cannot be lost due to synchronization with all types of platforms (web, smartphones, tablets, and computers) and a convenient system of search and tags.


What does the development cost depend on?

The cost of app development mostly depends on two factors — project complexity and developers’ location (country, city). Complexity is a number of features and depth of work. By this criterion software products are usually roughly divided into simple (400 hours to develop), medium (400 to 800 hours), and complex (800 to 1500 hours or more).

Location is important because the average wage in various countries may be quite different. For example, specialists from the USA and Western Europe make the most money whilst the developers in Eastern Europe, Asia, and Africa earn two-three and sometimes even ten times less than their American colleagues.

Cost of creation of an Evernote clone (in stages)

Now when we know developers’ averaged rates, we can move on to how much time all stages of software development will take – from preparing to testing. Knowing that we will multiply time by developers’ rate and calculate the estimated cost of creation of an Evernote clone.

Almost any project on software development starts with the main steps, which are very similar, regardless of what exact app you’re creating. However, their particularities and time required for the implementation depend on app characteristics (type, design, features, and the like) In the case of developing a clone of an app like Evernote, it usually requires about 27 hours: Thereby, depending on developers’ location, general preparations will require $864 in Eastern Europe, $1809 — in Western Europe, $2565 — in the USA.

In this section, we will estimate the cost of the creation of the main features that can be found in almost all apps. Of course, some features are present only in apps like Evernote, which are focused on the work with notes. On average, development takes about 38 hours: The functionality of push notifications: text notification of a new message in a chat, a voice signal at each system notification, device buzz at each system notification, etc. Geolocation functionality: automatic identification of a user’s location and adding a respective marker to the note headline and/or its content.


Key features of an Evernote clone

These are specific features, which users get when installing the Evernote app (or when registering in the web version). They are available on all types of devices compatible with Evernote. This list includes:

Web clipping. Users can save any web page or other content as a note with this feature. All that is required is to select «Share» and specify Evernote as a final destination. When going to the app, the users will have the possibility to select a notebook (note section created by the user).

Notes management. A feature that enables users to create, edit, update, sort, and save notes. You can create a note on Evernote and fill it with content in several ways:

You can do the following things with notes: The implementation of all that in an Evernote clone needs about 120 hours or $3840 to $11400.

Shared access / note management. When creating a clone you should also add the possibility to share notes with other users and work on them together. This functionality can work in two modes:

The development of the feature of shared access and management will require 36 hours or $1152 to $3420.

Work chat inside the app. Joint work becomes a lot easier if the platform users have the possibility to communicate in real-time without going out of the app. Work chat provides this possibility by letting people communicate through text or audio. Evernote also notifies the chat members of new messages with SMS and push notifications. SMS are sent to users, who have not yet installed Evernote.

The chat creation takes 28 hours, which will be spent on:

Synchronization of all versions (platforms). Most people also have a computer, laptop, and/or tablet aside from a smartphone, so Evernote does not limit its users to devices they have to work on. They all have one account, which the user can log in from any device. This is done with the help of interaction between the client-side and server-side of the mobile app, the implementation of which needs 24 hours or $768 to $2280.

By entering a subscription to Evernote, users get several additional possibilities: more space for new notes every month (free version provides only 60 MB per month), offline access, synchronization among all devices (between two devices in basic version), template creation, and search in Office. Let’s consider how much time and money this functionality creation requires.

Offline mode. In the free version of the app without the internet, the system shows only a part of the information about the notes such as headings, tags, small text fragments, etc. To get full access to the information a user needs to go online or get a paid subscription.

Even if the users get the basic subscription on Evernote for $8 per month, they can work with their notes without the internet. To do so, it’s necessary to activate an «Offline notebooks» feature, which will create a corresponded folder in which you save the selected notes.

Synchronization with email. Working with emails is an integral part of everyone’s life. We regularly send many messages to friends, colleagues, and acquaintances. For this reason, Evernote has added the possibility to work with these messages directly through the app: to make a note of the message and vice versa with a couple of clicks. All you need to do is open the message, enter an Evernote private address, and click «Send». Then open the app and continue working with emails the way you like.

The total time of implementing this functionality in an Evernote clone on the server side is 16 hours or $512 to $1520. 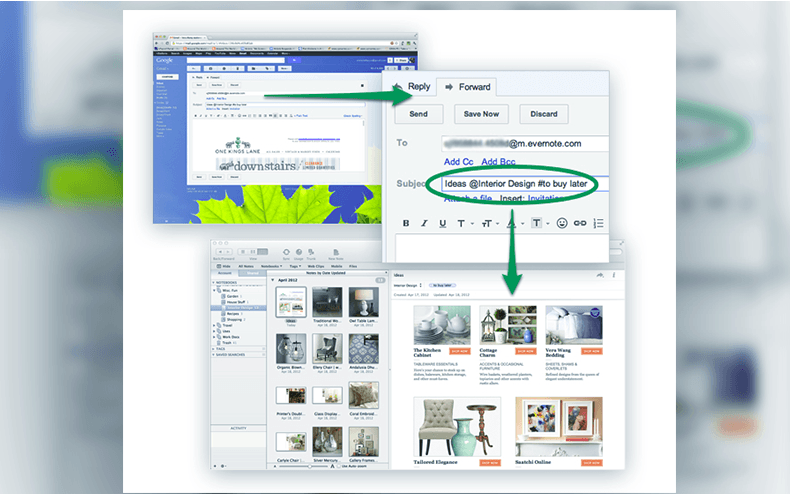 Lock code. Data security means a lot to the users so you have to implement features of access restriction by passwords when you will be creating a clone. The app will request such a password every time a user turns on his phone, computer, or tablet.

Extended search. This feature allows searching not only inside the notes but also inside the documents attached to them (word, PDF, txt, and others). You can implement the possibility of search inside images as well. This feature takes around 16 hours to implement on the server side.

Notes in PDF. Evernote also allows adding various remarks to the PDF documents: highlight an object, add an arrow, text note, or any other changes. It will take 40 hours to implement in your app. The cost — $1280 to $3800. 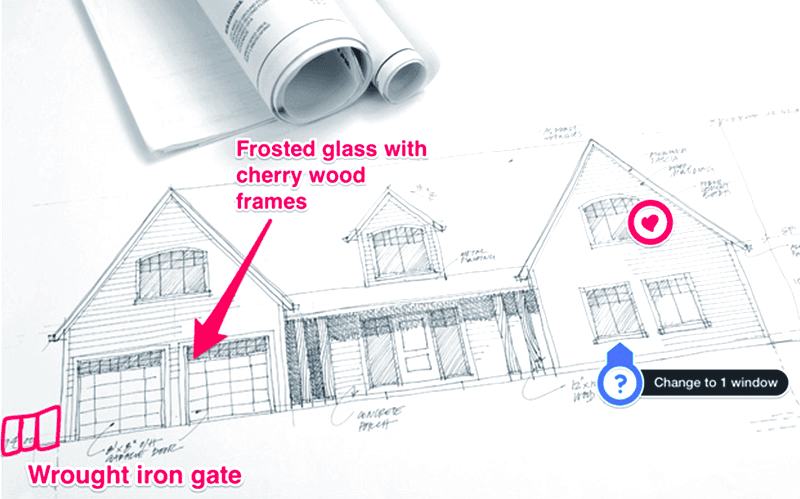 Notes history. If you create this feature, the users will have access to earlier versions of the notes (like in Google Docs). As a result, they can easily restore the lost data if needed. You have to spend 16 hours (backend — 8 hours) and $512 to $1520 on it.

Business card scanning. The app will be scanning business cards with a phone’s camera, translate the image into textual information and sort it by respective categories such as name, position, phone number, etc. It may be useful to add loading additional data from LinkedIn and Facebook. It will take 8 hours for the frontend and 32 hours for the backend. If you need a social network, integrating it will take 8 more hours. 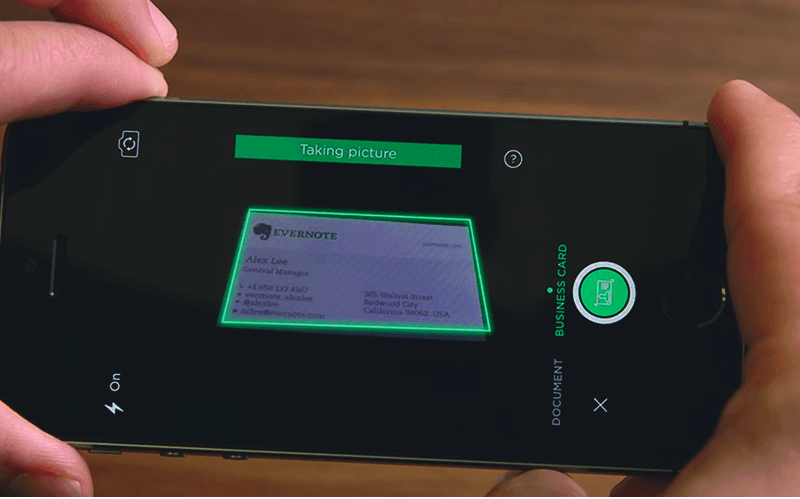 Discover similar notes. Automatic search for notes with similar content (and tags) when creating/opening a new note will help to fight with loading the app with the same notes and/or to detect related notes. The time to implement — 16 hours (backend — 16 hours).
Note presentations. This feature will make it possible to show notes in a full-screen mode. That is useful if you need to show the content to colleagues, family, and friends. It will take about 8 hours to implement.

Your Evernote clone will work with large amounts of users’ personal and business information, so you should take care of the protection of secret data when creating this app. In the Evernote network, this problem is solved by codebook encryption, which works as an extension of HTTPS encryption that is protecting important information on the user’s device as well as during its transfer. Due to this, third parties cannot read the users’ confidential data even if they have access to your traffic or SSL keys.

Along with this method, Evernote is using the following security settings to protect the users’ personal data:

The time to implement security mechanisms is 60 hours.

Total time of working with the server side — about 200 hours.

Aside from the development, you’ll have to spend time on making your app look nice and be user-friendly. Therefore, you will need to spend 210 hours on the development of UI/UX design and about 113 hours on pretesting and error correction when creating a clone.

How Much does it Cost to Create an Evernote Clone? key takeaways:

Merehead does professional development of create a site like Evernote. If you have questions, contact us for a free consultation.

Merehead review. Vleppo is a startup, digital asset exchange platform based on the Komodo blockchain protocol.
Category: Development 01/05/2023
How to Use Blockchain in Education Industry?
Blockchain technologies grow rapidly and are applied in various industries. The most popular direction is the finance industry. In the first place, it is the development of cryptocurrency. Every user of gadgets knows, or at least heard about the "digital currency". The mass media often reports news about the current bitcoin rate, the formation, and start-up of various branches (forks) on the cryptocurrency market. If the image of cryptocurrency is already fixed in the consciousness of people, then the meaning and principle of digital money remain beyond comprehension for the majority. 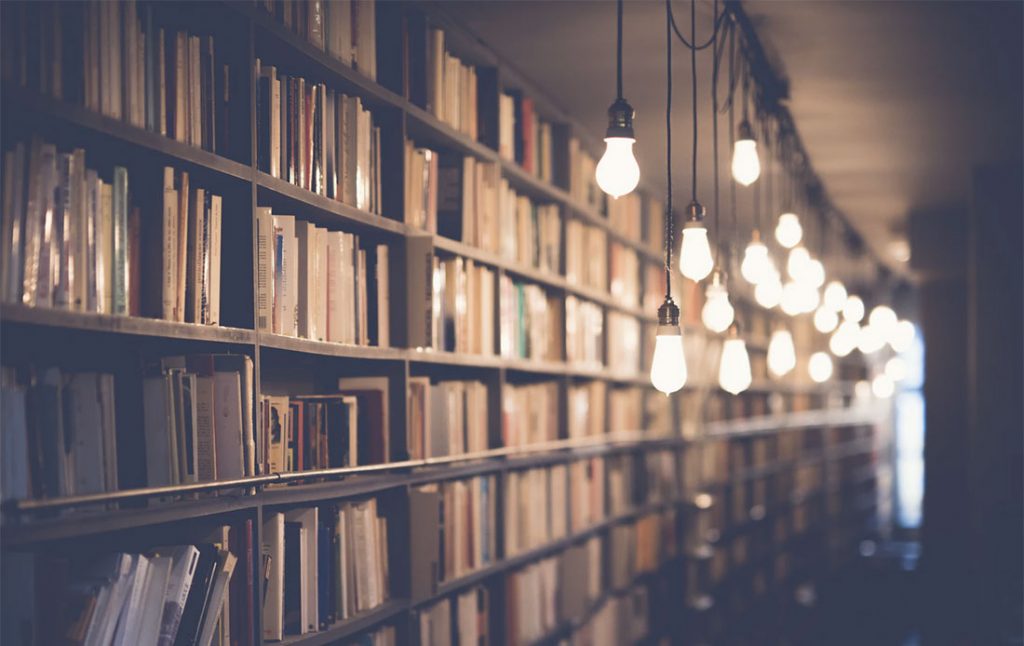 Category: Development 11/14/2021
How to Create Elearning Website like Udemy and Learning Management System (LMS)
The e-learning industry is booming. According to Orbis Research, by 2022 this market will reach $ 275 billion ($ 165 billion in 2015). Forbes predicts growth to $ 325 billion in 2025 ($ 107 billion in 2015). This impressive growth is due to several key benefits that e-learning offers over traditional learning: 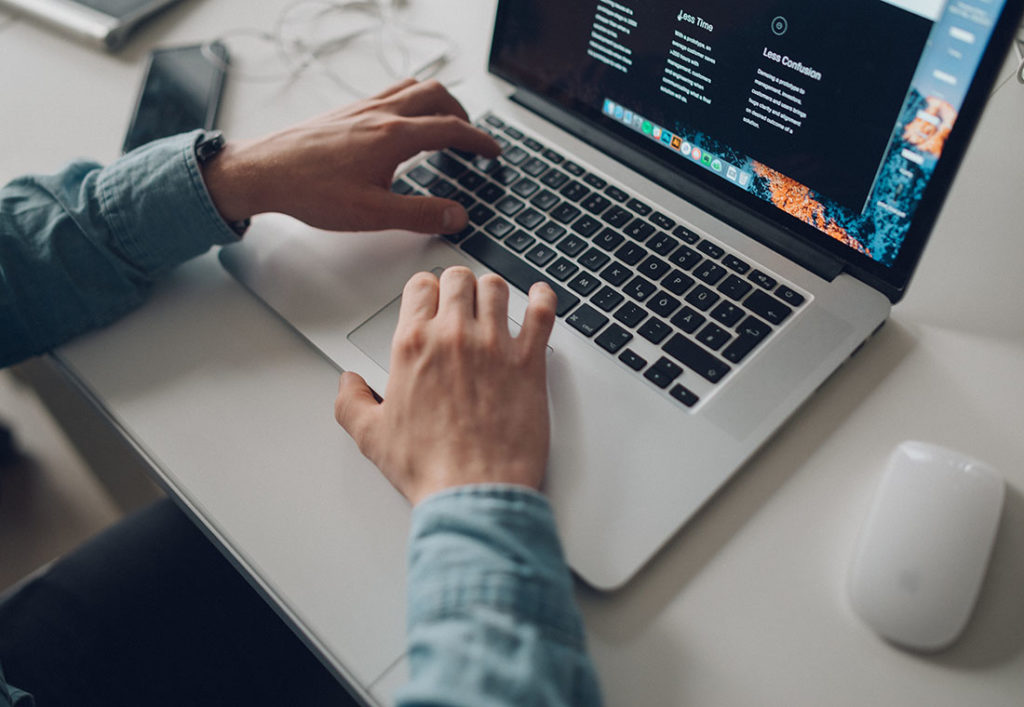 Category: Development 11/09/2021
E-learning Application Development: Features and Cost
Innovative technologies are changing the look of familiar things. Now progress has also touched such a seemingly well-established sphere as training, making it even more interesting and convenient. Now it is possible to find an application for almost any direction and study without leaving home at any time. All you need to do is install the app on your smartphone or tablet. The digital education trend has become so popular that the world's leading universities have adopted it. In this article, we will talk about developing applications, consider the features of programs and development cost. 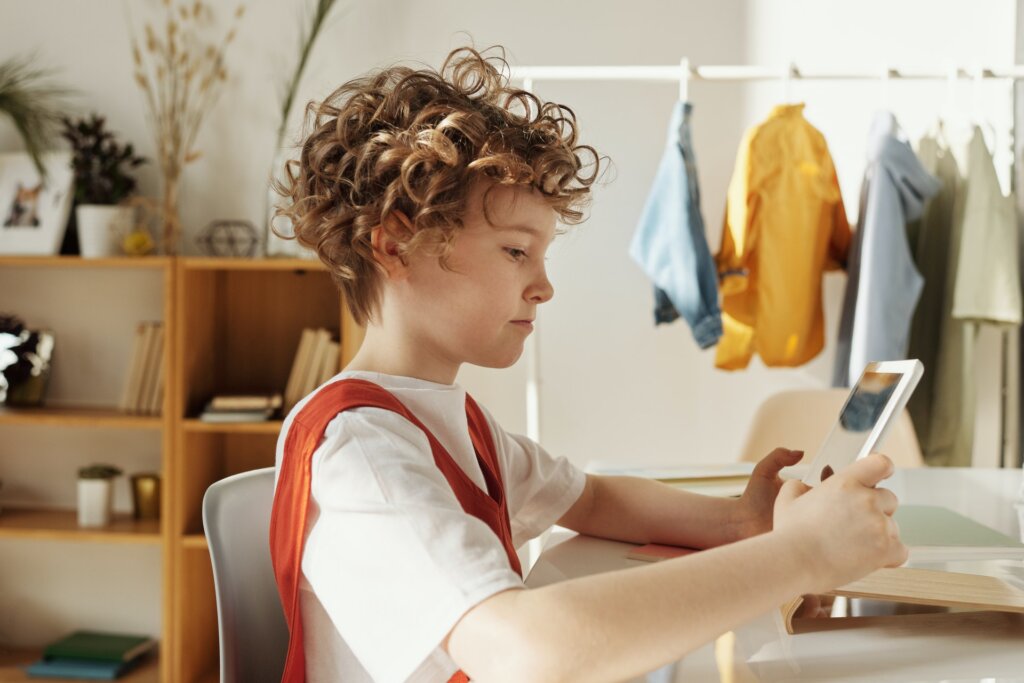