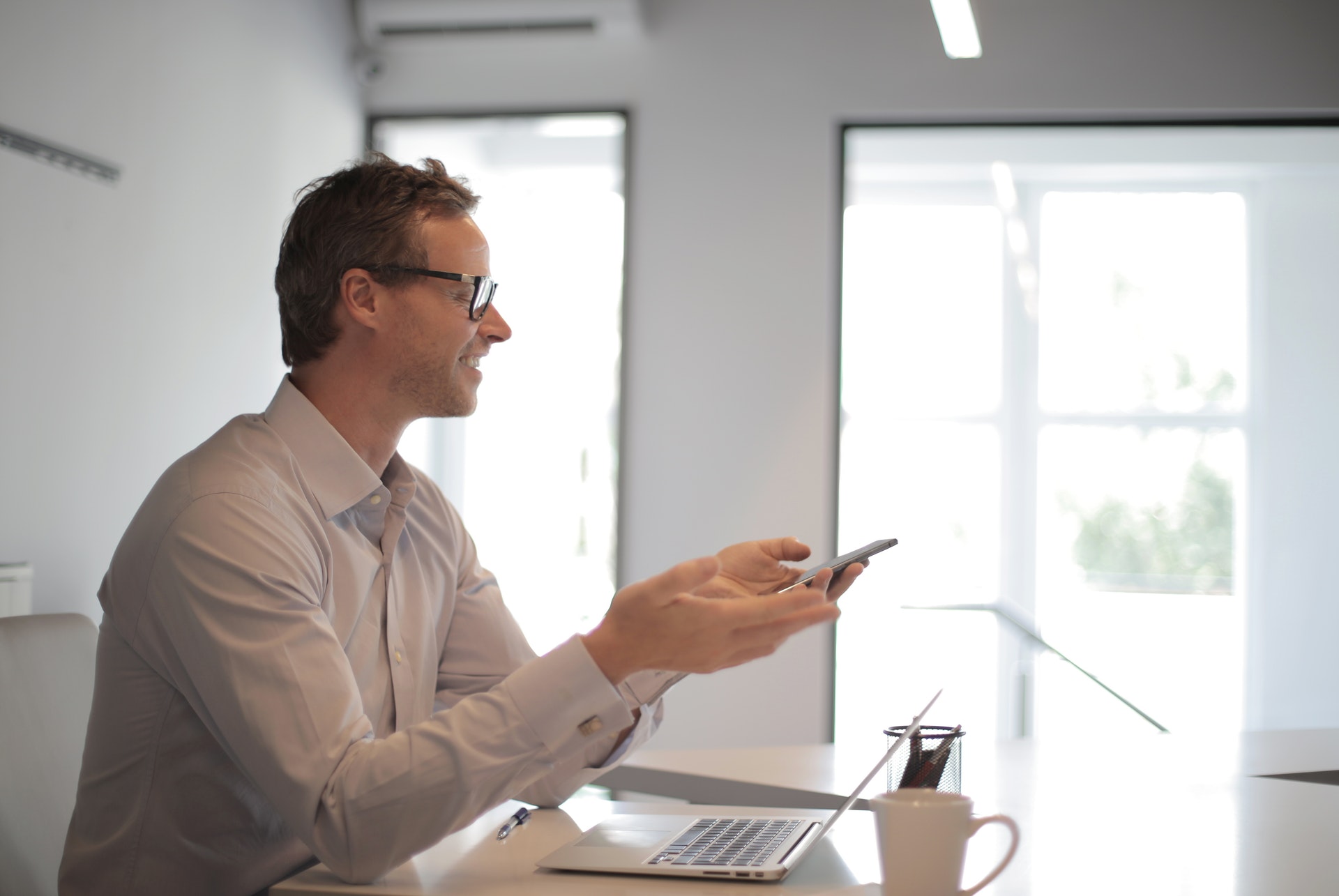 How to Create Bitcoin a Wallet App?

Write to Yuri
Merehead / Blog / Mobile apps / How to Create Bitcoin a Wallet App?
Are there any questions?
Yuri Musienko
Write to the expert

Bitcoin is the most popular cryptocurrency in the world, which is regularly used by several dozen million people. Hundreds of millions own some number of BTC. We’ll tell you how to create your bitcoin wallet for integration with your business or the launch of a new project.


What do you need a bitcoin wallet for?

The first decision to make when creating your bitcoin wallet is to understand who will be using it, how, and what for. Type, features, design of a wallet and marketing strategy will depend on these things. For instance, if you just need a possibility to accept payments in bitcoins, then this wallet can be easily created with various APIs. The development of a wallet for a commercial SaaS project requires more significant effort and money.

Here are the main examples of the use of bitcoin wallets: 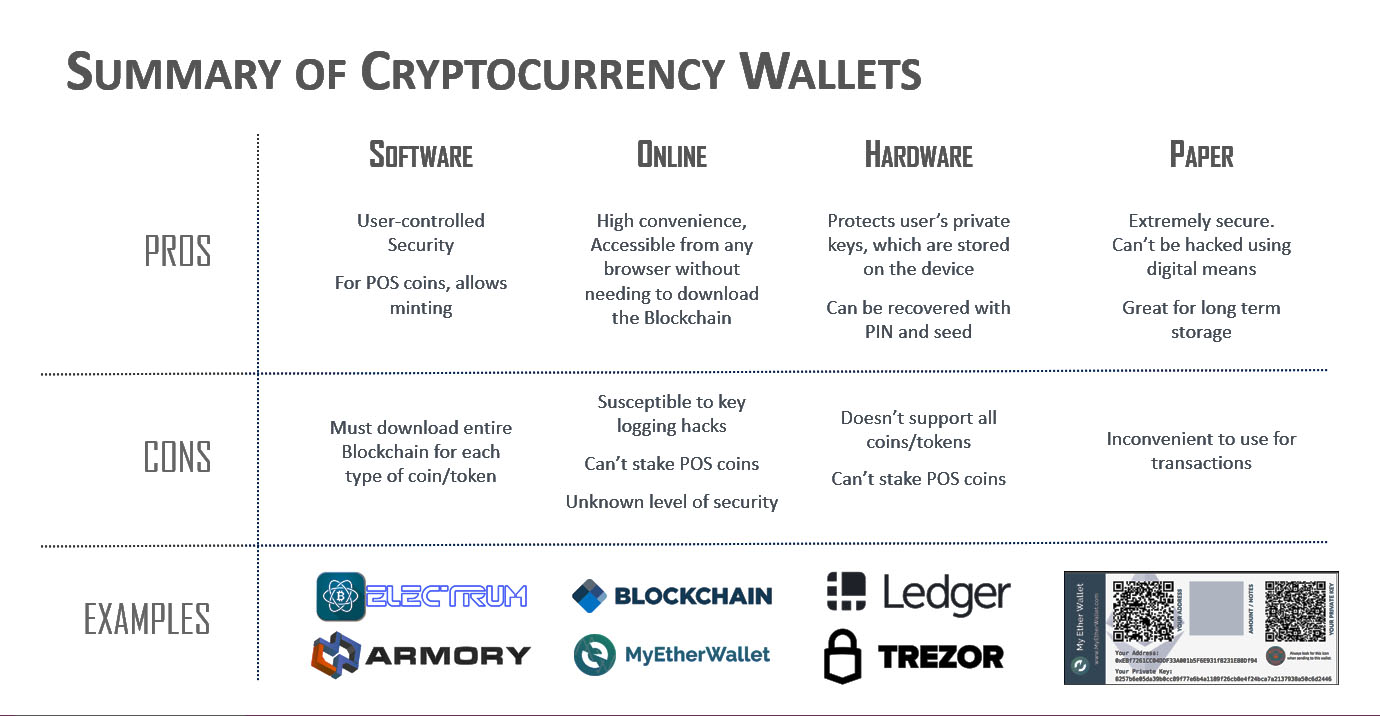 Description of types of bitcoin wallets: pros, cons, and examples. Source
Desktop wallets. These are bitcoin wallets, which work within the framework of desktop operating systems Windows, macOS, and Linux. They usually have maximal functionality, a high security level, and a relatively simple interface. Besides, unlike all other options, desktop bitcoin wallets allow launching full nodes, which store all blockchain data, and conducting examination and validation of transactions.

Such wallets are mainly created with a focus on bitcoin enthusiasts, miners, and blockchain developers because only they are ready to tolerate some restrictions of desktop wallets. Some of them are high requirements for hard disk capacity (now it’s 300 GB), constant linkage to a computer, and the necessity of reliable protection of this computer from all kinds of malicious software, frauds, hacker attacks, and DDoS attacks.

Hardware wallets. These usually are flash drives, which have to be connected to a computer or a laptop to get access to cryptocurrency balance management. Their particularity is that they always store private keys inside the device, due to which hardware wallets are considered the safest. These wallets are managed by an app that is embedded in a flash drive.

Hardware wallets are created with a focus on investors, miners, businessmen, and other users, who operate with a big number of bitcoins and want to protect them from hackers and frauds as best they can. It’s more difficult to develop such a wallet than other types because you need to create not only an app but also a hardware device, which the software will be integrated into.

Depending on the developer, these apps store private keys either inside a phone or on an external server, which is not very safe. For this reason, such wallets aren’t recommended to be used for operations involving huge amounts of money. They are most suited for small-scale daily transactions.

Paper wallets. As a rule, the creation of a bitcoin wallet, in this case, entails the development of software for encryption of public and private keys, so that they can be stored in paper form safely. Approaches to encryption may be various. The most important thing is for them to work quickly and be reliable. Those, who don’t trust digital protection methods, use paper keys.

Online wallets. These are SaaS platforms that allow managing the assets with the help of any device that has Internet access. These wallets combine the accessibility of mobile wallets and the capability of desktop wallets, which comes at a price of lower security since the online wallets store the users’ public and private keys on their servers.


What features to implement in a bitcoin wallet? 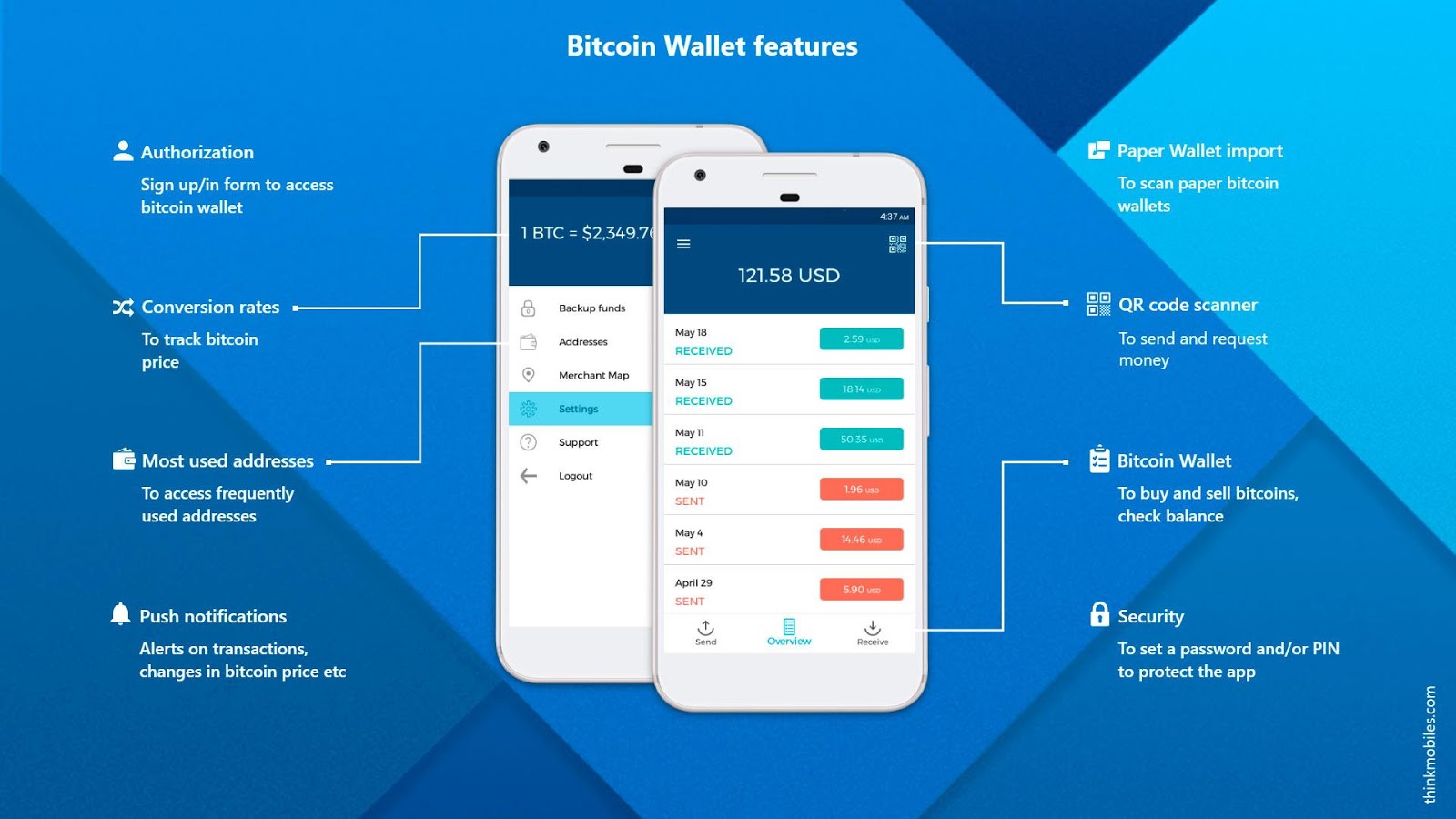 We can use the existing mobile bitcoin wallets such as Coinbase, Electrum, and GreenAddress as a standard to learn what features each similar app should have. Here is their description.

Does the wallet need additional features?

How the YubiKey hardware authentication works. Source
If you want your bitcoin wallet to be popular with the users, it has to stand out amongst the competitors somehow. You can do it by using various additional features, which improve the user experience. Here are several examples of such features:

How to develop your bitcoin wallet?

Bitcoin Wallet API. If you need to create a bitcoin wallet to have a possibility to accept payment in bitcoins, you can just use a special API to integrate this possibility into your service. You are able to do it in 1-2 weeks and the cost is $1-10 thous. Here are several projects, which provide such a service: BitPay, Coinbase, Coinify, and SpectroCoin.

Software Development Kit (SDK). You can use such public libraries as Coinbase, Bitcoinj, or Blockchain to speed up and simplify the development of your app. Here’s how much it might cost.

Creating from scratch. It requires more time and money, but this is the best approach if you want to develop an app with a unique design and functionality. Here’s the estimated development cost. 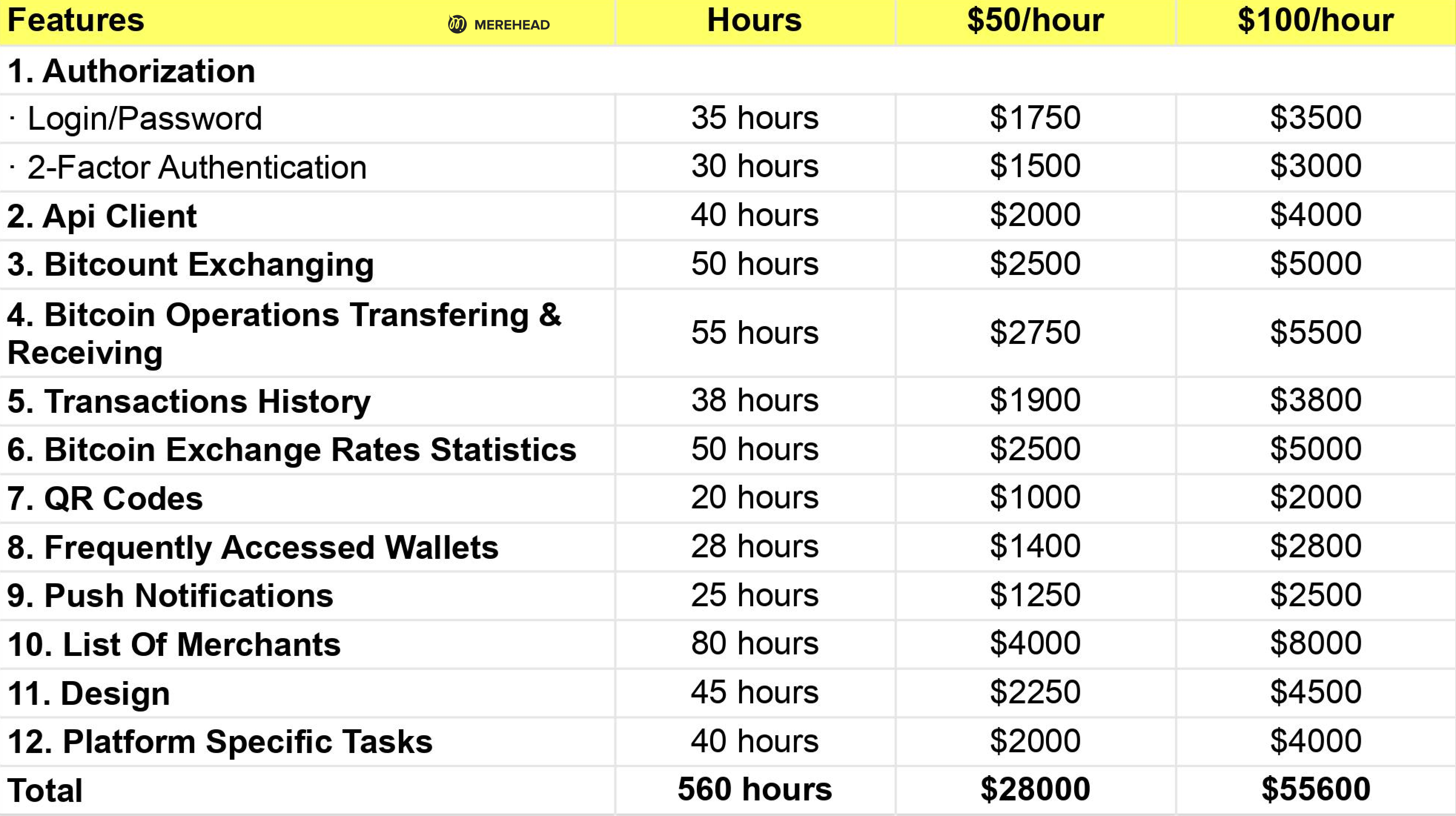 How to Create Bitcoin a Wallet App? key takeaways:

Merehead does professional development of bitcoin a wallet app development. If you have questions, contact us for a free consultation.

Merehead review. Vleppo is a startup, digital asset exchange platform based on the Komodo blockchain protocol.
Category: Mobile apps 12/30/2022
Everything You Need to Know about Bitcoin Wallet App Development?
A bitcoin blockchain is open-source software so any interested person can use it to develop his mobile bitcoin wallet. In this article, we’ll tell you how to do it in detail. 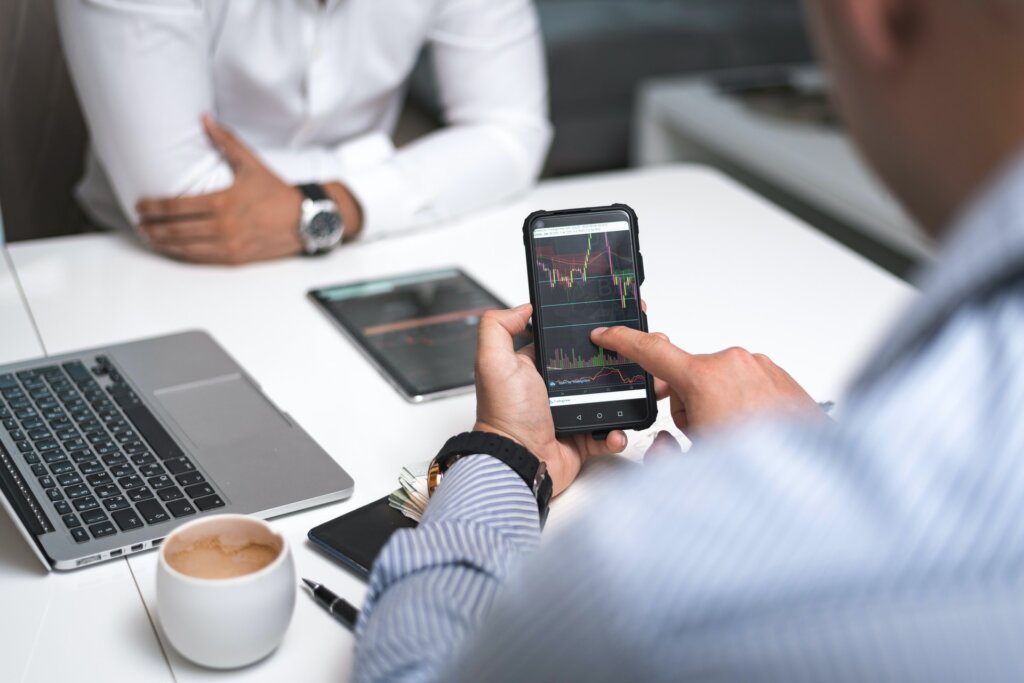