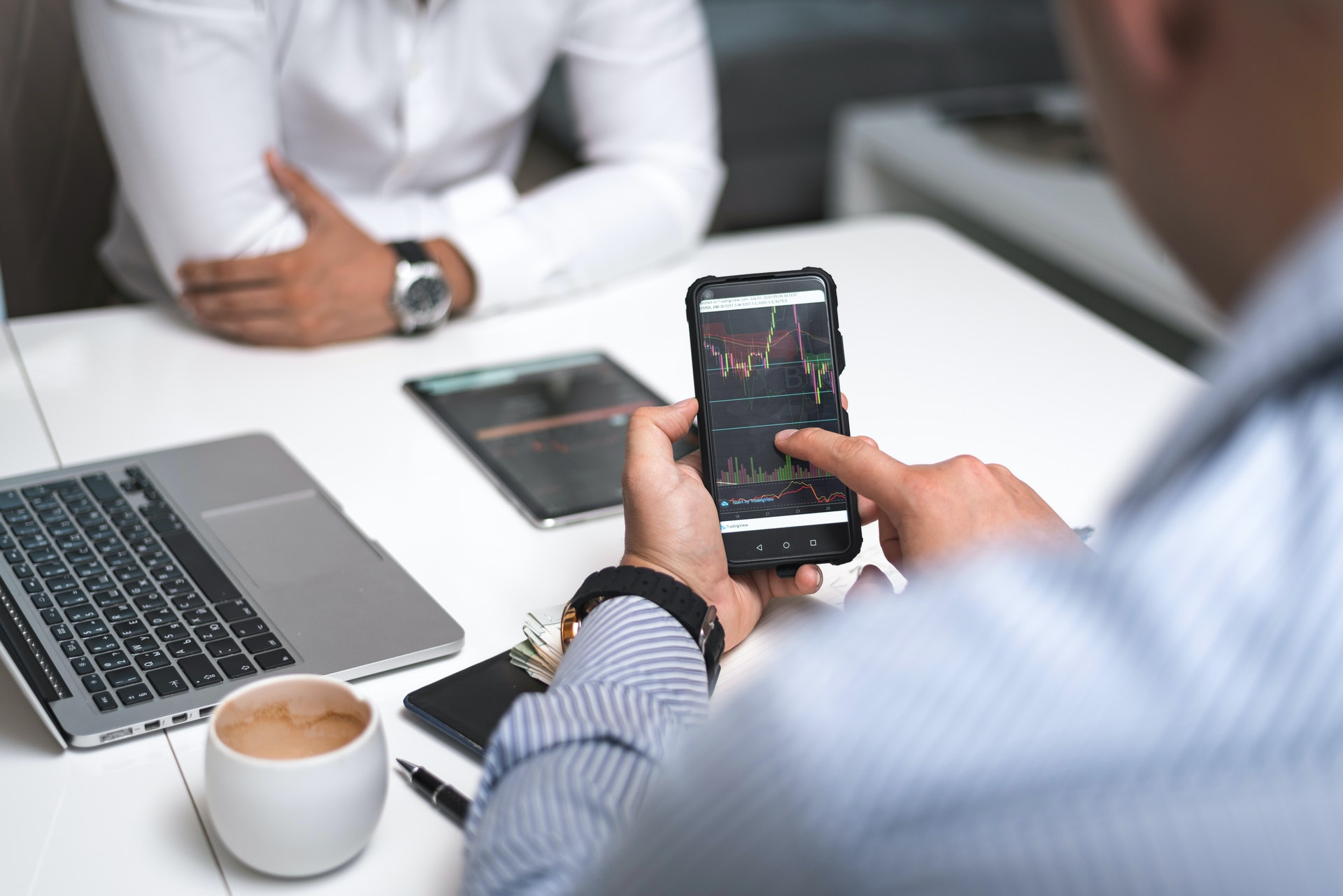 Everything You Need to Know about Bitcoin Wallet App Development?

Write to Yuri
Merehead / Blog / Mobile apps / Everything You Need to Know about Bitcoin Wallet App Development?
Are there any questions?
Yuri Musienko
Write to the expert

A bitcoin blockchain is open-source software so any interested person can use it to develop his mobile bitcoin wallet. In this article, we’ll tell you how to do it in detail.

A cryptocurrency bitcoin wallet is a place where users will store public and private keys (login and password) that give them access to their cryptocurrency assets. Depending on the type of such storage, crypto wallets are commonly divided into the desktop, mobile, hardware, and web ones. Deciding to create a bitcoin wallet, the first step is to understand where you’ll store keys because this influences the features, target audience, and a platform.

Mobile. They store private keys on the smartphone. Mobile wallets allow checking a crypto balance, conduct transactions whenever and wherever you want; however, they can’t be full nodes because they usually lack memory (more than 200 GB are needed). These wallets often have a range of additional capacities such as fingerprint identification or an embedded QR code scanner for quick transactions.

Desktop. The apps, which you need to install on your computer or a laptop. They are easy to use, have a maximal functionality and they allow creating full nodes among other things (consequently, you can mine). They store private keys in the memory of data storage devices in the computer, which creates certain risks since the security level of such systems depends on their users and not on the wallet. Hardware. These are usually flash drives, which have to be connected to the computer, after which the user gets the opportunity to manage the wallet balance through the app installed on the device. This cryptocurrency wallet works in such a way for private keys not to leave the storage device. That makes them the safest possible way to store bitcoins. Paper. Normally, these are apps that encrypt and decrypt public and private keys so they can be moved and stored in paper form safely (for instance, in a secure safe or bank). Web. They function as a cloud service that makes it possible to manage bitcoin assets through any device: a phone, a computer, a tablet. These wallets combine the capability of desktop wallets and the accessibility of mobile wallets so they are quite popular among ordinary users. This being said, that comes at a price of lower security since the online wallets store the users’ private keys on their servers. 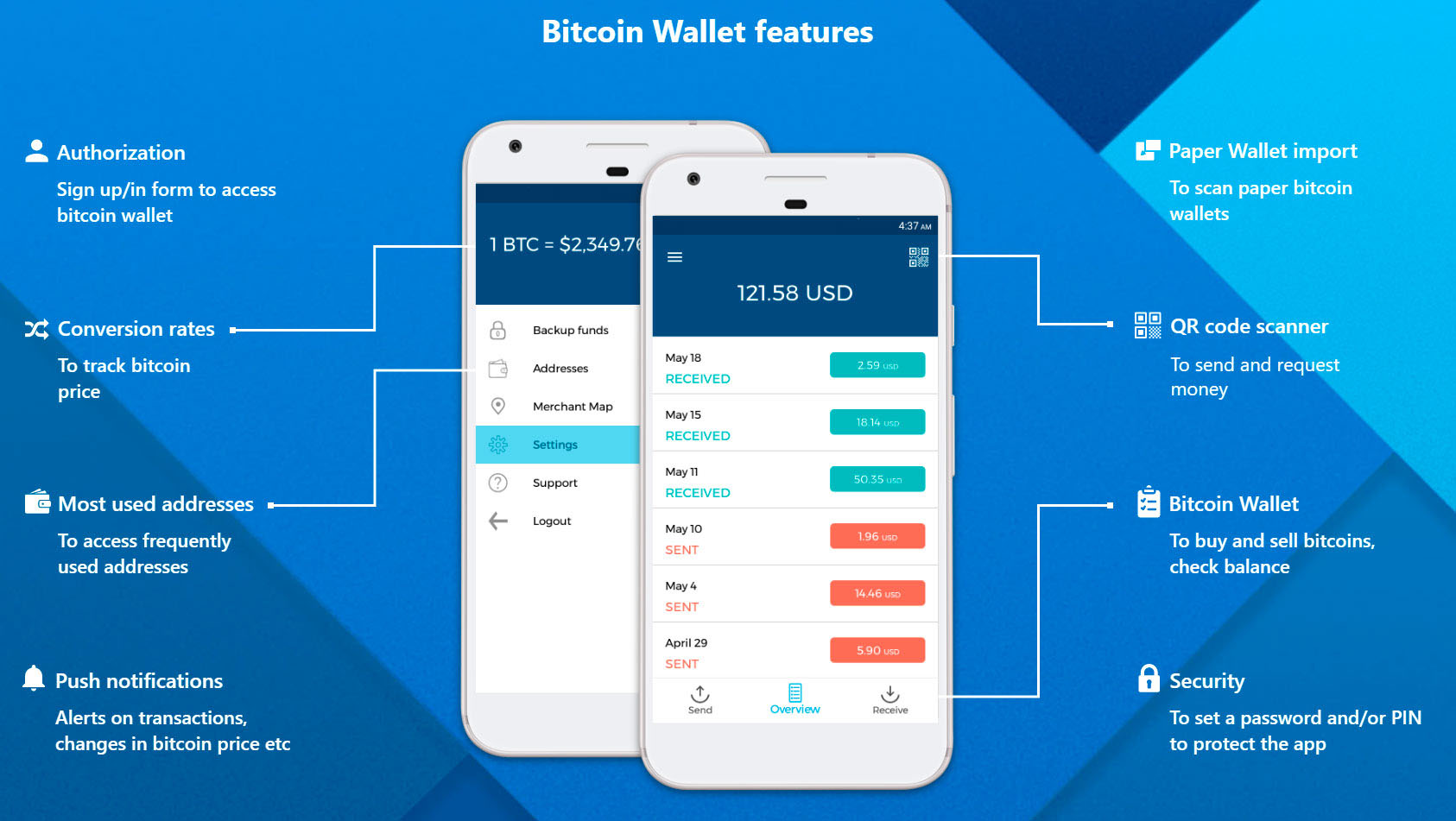 Except for the paper wallets, features of other types of bitcoin wallets are pretty standard and closely resemble the features of apps of other payment systems (PayPal, Apple Pay, Google Pay) or online banking apps. Here is the list of them and a brief description:

Sign up / in. Registration of the user in the cryptocurrency wallet is not only the creation and settings of a profile but also the creation of cryptocurrency addresses in the Bitcoin payment system (it’s like opening a bank account). If the user already has such an address, then the registration implies binding this address to your app. For this reason, this feature (and authorization) should be developed with the use of a reliable, well-tested security protocol.

Enhanced security. It’s impossible to undo transactions in the Bitcoin payment system and it’s very difficult to find the counterparty in real life, so your app should offer the users the highest security level. And it’s not just about data encryption and protection from hackers but also about the protection of users’ accounts from unauthorized access.

Here are some things that you can implement to enhance security when developing your own bitcoin wallets:

Conversion rate. As far as the app for cryptocurrency bitcoin wallet makes it possible for the user to buy and sell BTC for fiat and other cryptocurrencies, they need to know the current bitcoin rate to these currencies and the conversion rate of bitcoin into these currencies considering all commissions. The rate can be pulled in from the exchange, where you’ll be exchanging bitcoins; for example, from Coinbase.

Moreover, you can implement some additional features as well. For instance, show your users how significantly the conversion rate has increased or decreased since yesterday, in a week, or a month. This will give them the possibility to forecast further changes in the rate and exchange cryptocurrency at the most profitable rate.

Wallet (assets management). These are directly those features, which will allow users to manage their cryptocurrency assets:

QR codes for quick transactions. This feature is optional, but the users appreciate it because it simplifies transactions: there’s no need to enter the public keys, which neutralizes the risk of typing mistakes and accelerates the process very much. QR code generator and scanner are needed for the normal work with QR codes.

Crypto address book. Separate screen with a list of frequently used addresses. Just like the previous one, this feature is optional in the bitcoin wallet (but users expect it). However, its development won’t take a lot of time and it’s not expensive so it should be in your app.

Push notifications. They provide the users with the opportunity to get a sense of what is going on with their cryptocurrency assets; for instance, they notify of new receipts or completion of an initiated transaction. Besides, you can use push notifications to inform the users of the rate dynamics, your trading apps, special offers, app updates, etc. 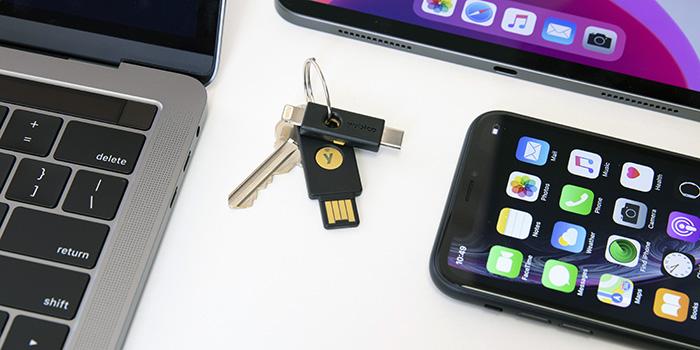 Flash drives with a hardware key YubiKey 5ci by Yubico can be used to authenticate the bitcoin wallet instead of a password, fingerprint, or Face-ID. Source
Basic features are nice, but your bitcoin wallet should support some additional capabilities, which will help to stand out among the competitors and increase the engagement of the users. Here’s what you can implement in your app:

SDK (Software development kit). There are several ways to develop a cryptocurrency bitcoin wallet. The most optimal one is the use of a public library.

There are quite a few of them and the most popular ones are:

Make bitcoin a payment method. If your task is not to develop a cryptocurrency wallet, but to create a possibility to accept or make payment in bitcoins, then you can simply use the help of such a service provider to integrate bitcoin payments into the existing service. It’s simpler, cheaper, and faster.

Here are the most popular options:

Everything You Need to Know about Bitcoin Wallet App Development? key takeaways:

Merehead does professional development of develop bitcoin wallet app. If you have questions, contact us for a free consultation.

Merehead review. Vleppo is a startup, digital asset exchange platform based on the Komodo blockchain protocol.
Category: Mobile apps 12/30/2022
How to Create Bitcoin a Wallet App?
Bitcoin is the most popular cryptocurrency in the world, which is regularly used by several dozen million people. Hundreds of millions own some number of BTC. We’ll tell you how to create your bitcoin wallet for integration with your business or the launch of a new project.