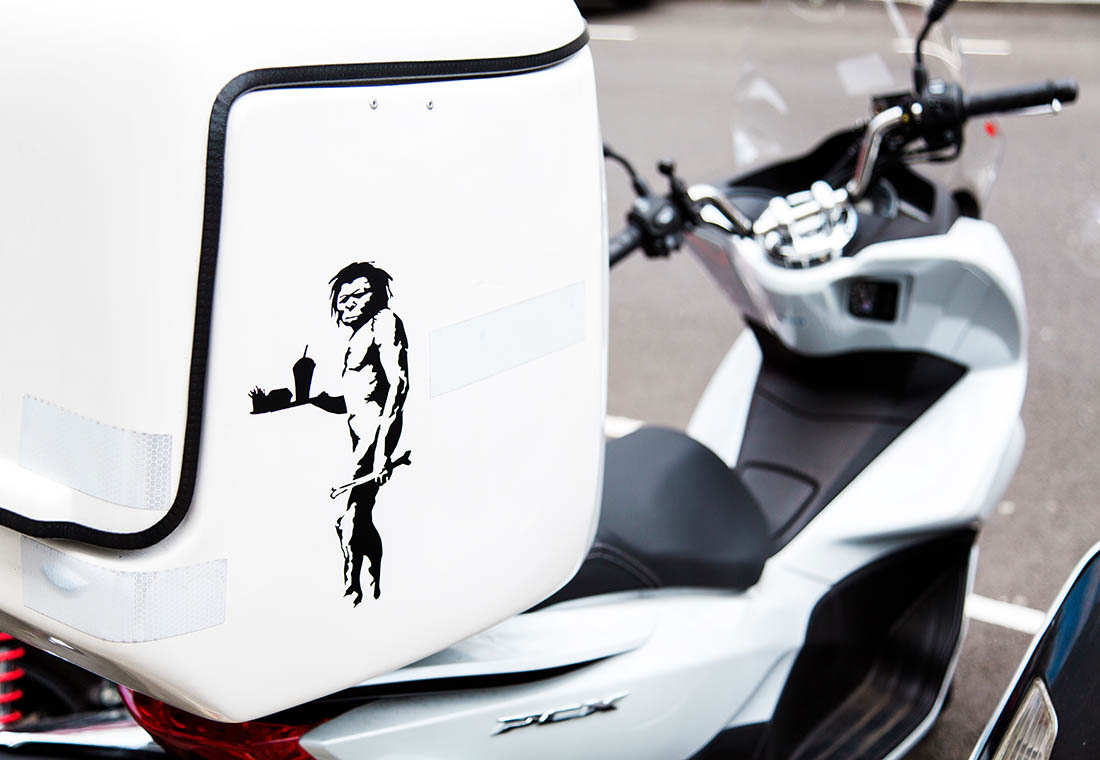 Write to Yuri
Merehead / Blog / Development / Yelp Website Clone - How to Create a Business Directory Website Like Yelp?
Are there any questions?
Yuri Musienko
Write to the expert

Yelp is a business directory for searching local services and businesses, from restaurants, cafes and bars to mechanics, dentists, gas stations, and more. It has the highest ratings and biggest profits. In this article you will learn: why this service has become so popular how to create your own business catalog like Yelp and monetize it. 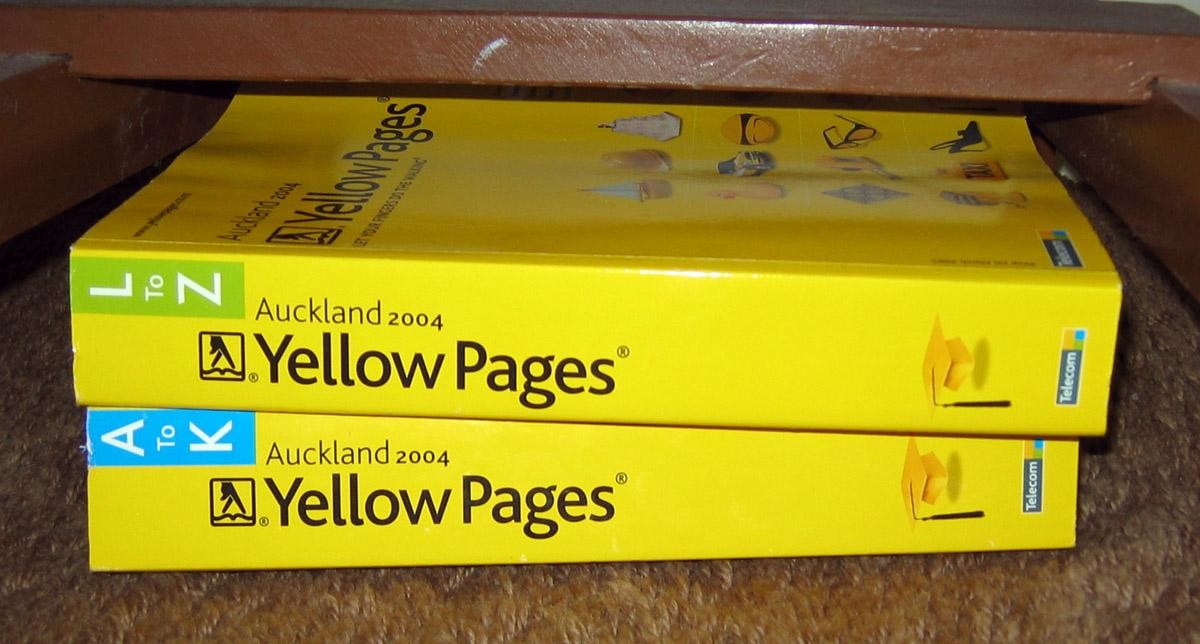 "Yellow Pages" is the collective name for paper catalogs of enterprises with advertising, in contrast to the "white pages" - a telephone directory without ads. Source of the image

When Yelp started back in 2004, its main competitor was not another site or application, but ordinary paper Yellow Pages with a list of enterprises, their profile and contacts. Therefore, the creators of Yelp did not think about what niche they should work in. Now the situation is fundamentally different: there are tens of thousands of different online directories on the network that constantly fight each other for traffic, comments, likes and advertisers. It's not easy for beginners here.

And there are only two ways that startups can go to become successful in this business. The first involves the development of an online listing, better than that of competitors, with the help of creative, unique features and a better user experience. It is difficult, expensive, long and does not guarantee success, but it is possible: the success of TripAdvisor, BBB.org and Foursquare is proof of this. 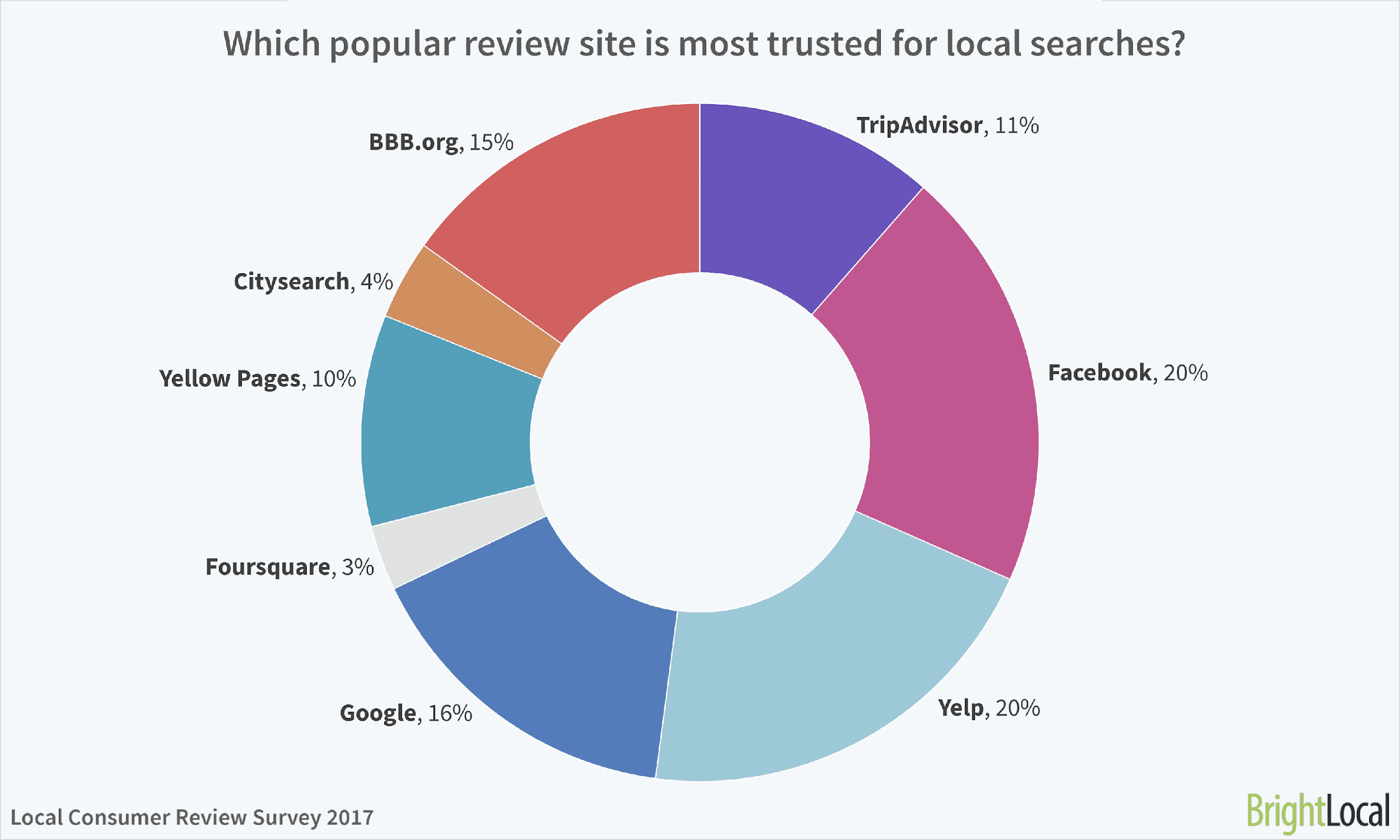 Which business directory do users most trust. Source of the image

Another way is to occupy a narrow niche, similar to how Amazon (books), Google (search engine), Apple (PC) and TripAdvisor (hotel reviews) started at one time. This is the best option for a highly competitive market, since it allows you to create a website customized for a specific target audience, which increases the effectiveness of design and marketing. In addition, this way you can check the concept of your project for relatively little money.

Here are some promising niches for online business listings: 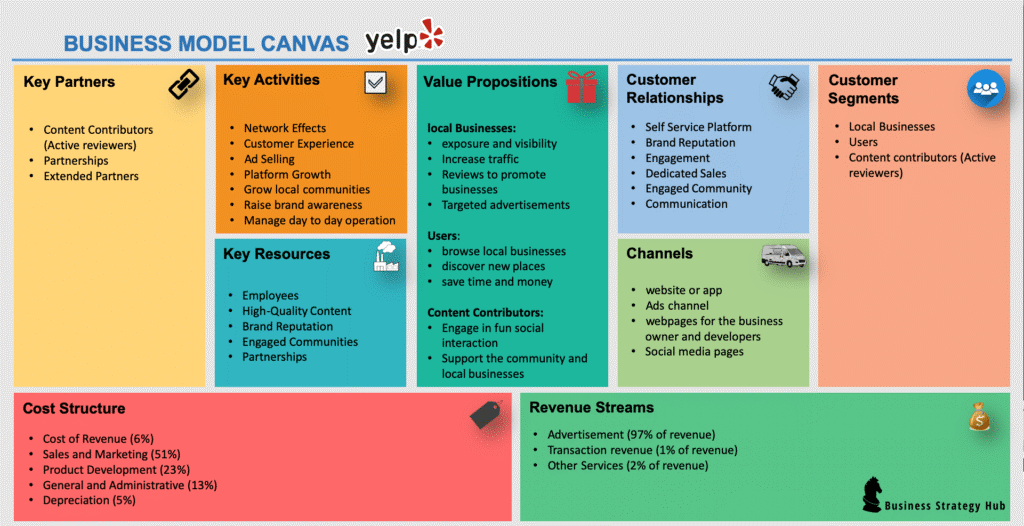 Yelp Business Model. Source of the image
The original Yelp business model implied that it would be an online analogue of the yellow pages with referral links. But investors didn’t like this business idea, so Yelp started looking for something else, and then the project team noticed that users didn’t use links to go to sites in the catalog, but the “real reviews” function. After that, the site was redesigned.

The new version of the site is a familiar catalog of enterprises (services) with an honest rating and comments (reviews) that anyone could leave and see. And this idea shot: the number of reviewers on the site increased from 12 thousand in 2005 to 100 thousand in 2006, and by the summer of 2006, one million people visited the site a month. Further, the platform’s popularity only grew.

The value propositions of the redesigned Yelp for its main user groups are: 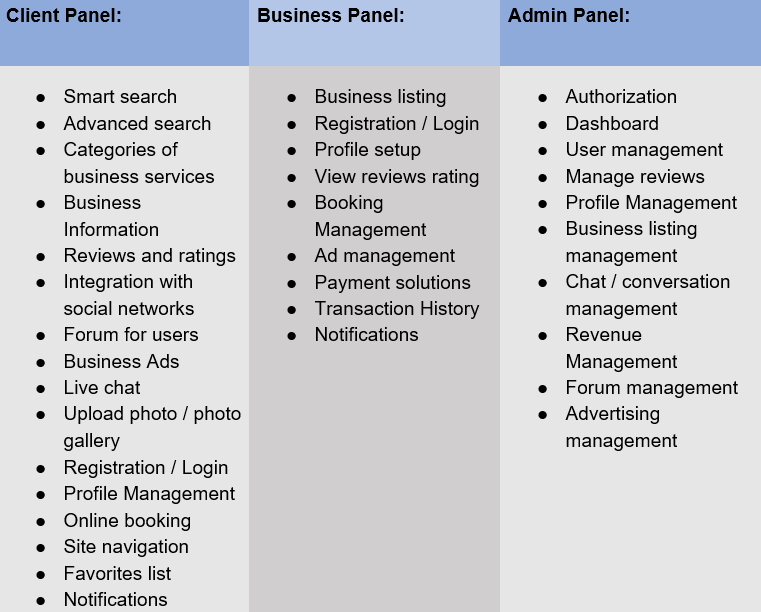 The Yelp site works with three types of users: business (service providers), users (service consumers), and platform administrators. When creating your Yelp clone, you need to implement most of the original functions for them, relying on the following things:

Authentication system. To improve the user experience, your site should support quick registration / login through accounts on social networks. In addition, it is important to create a verification algorithm for service providers that will weed out unreliable entrepreneurs and outright scammers. But, you should not go too far, as the essence of Yelp is in user comments and reviews. You can only evaluate the legitimacy of a business (registration, license), and not the quality of its services. This will be done by users using reviews and a rating system. 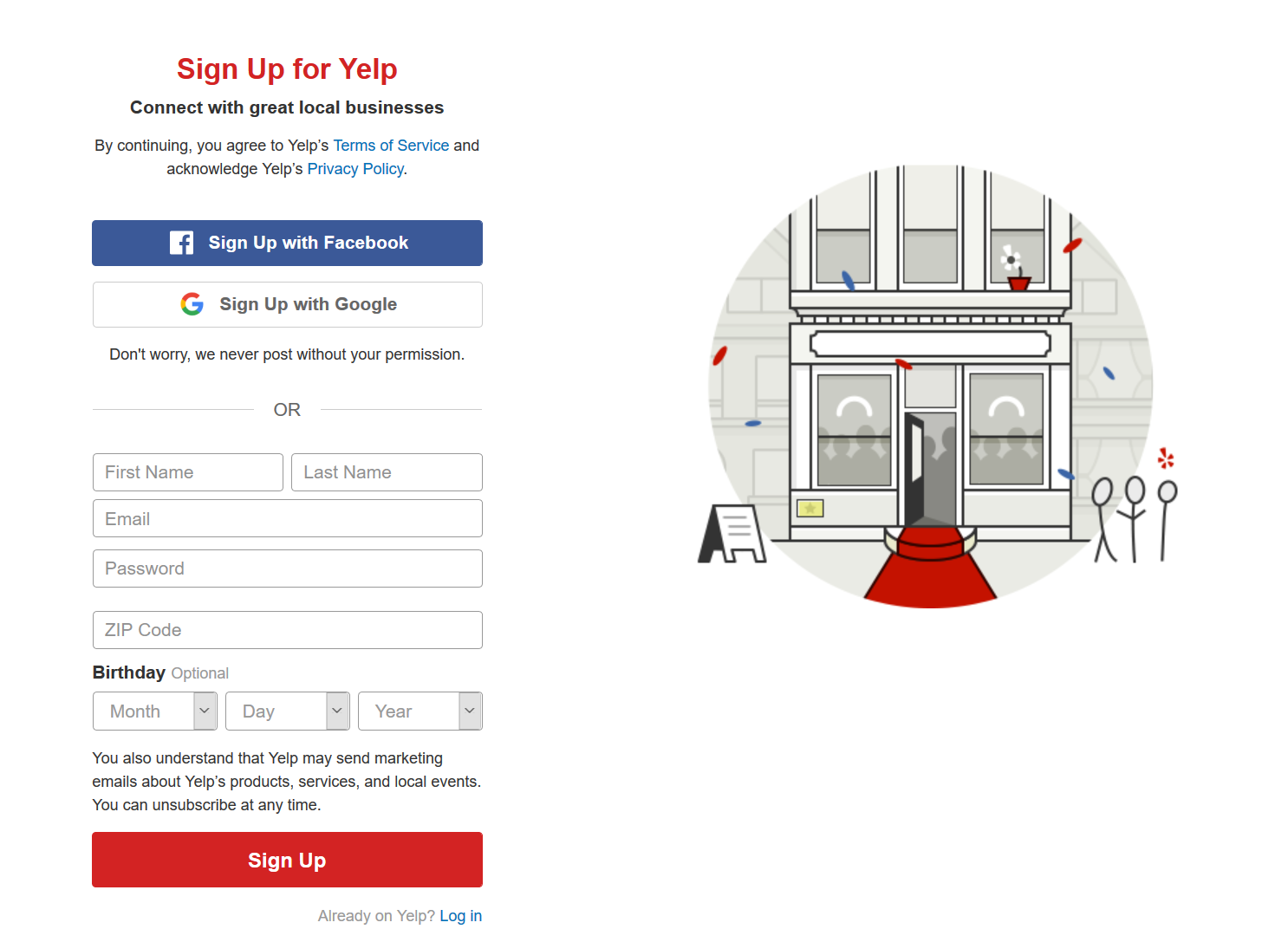 Users geolocation. Location-based utility is an important element of the Yelp service. First of all, we are talking about reducing the recommendations in the listing of services to those that are next to the user (20-100 km), as in Tinder. In addition, integration with the Google Map API (SDK or iOS Map Kit) allows you to link all the services in the recommendation listing to a location on the map and show it to the user, which is much better than an address in the form of text.

Reviews and recommendation system. This is a key element of Yelp and its analogues, around which the entire platform is built, so you need to approach its implementation with all bitchiness and thoroughness. Firstly, we need tools that make it possible for users to create interesting, creative reviews, not just text messages. Studies show that on Yelp, users create more creative reviews than on other sites, and the project team encourages this.

Secondly, we need tools to evaluate reviews (points, stars, emojis), so that users encourage reviewers who tickle their imagination. In addition, you also need some real rewards for the best reviewers (like on Yelp): special events, symbolic rewards or, possibly, real money rewards, like on Medium.com or other similar sites.

Thirdly, user ratings and ratings should influence the position of service providers in the listing of recommendations. Moreover, the system should also take into account the “usefulness” of the reviewer. So, on Yelp at the top of the screen there are reviews of active reviewers with the largest number of positive ratings from other users. Whereas reviews from dubious accounts either appear on the second page or simply hidden. 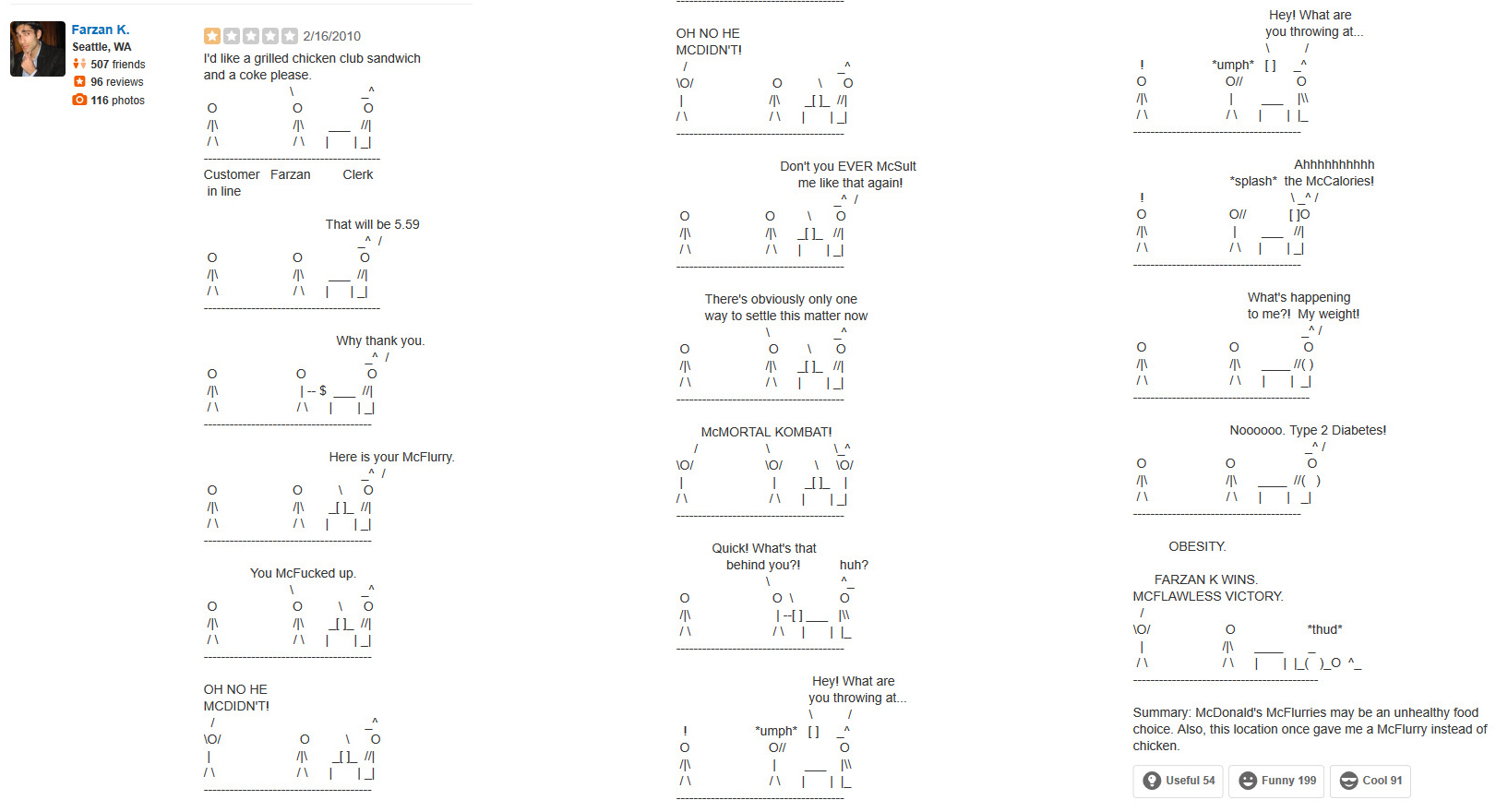 Review of Farzan K. at McDonald's. Source of the image

Push Notifications, Newsletters. On Yelp, this functionality works like on most other sites, except that notifications and newsletters are made based on data in the profile and past user activity. This makes notifications more personalized, which increases the effectiveness of advertising and avoids situations when vegetarians are asked to take a survey regarding restaurants that specialize in meat dishes.

Yelp sends users personalized recommendations based on their location
Rating system. Cloning this function with Yelp will not work, since many of its features and algorithms are hidden. Therefore, when launching your Yelp analog, you will need to develop a rating system from scratch, taking into account the following things (of which we know for sure): Personal recommendations. In 2018, Yelp introduced a tool called Collections. The new function uses artificial intelligence, which tracks the user's past activity (requests, reviews, ratings) and creates personal recommendations “for new sensations” on its basis. That is, Yelp AI recommends new restaurants, cafes, cinemas, spas and other services, as Netflix recommends new films and TV shows to its users. 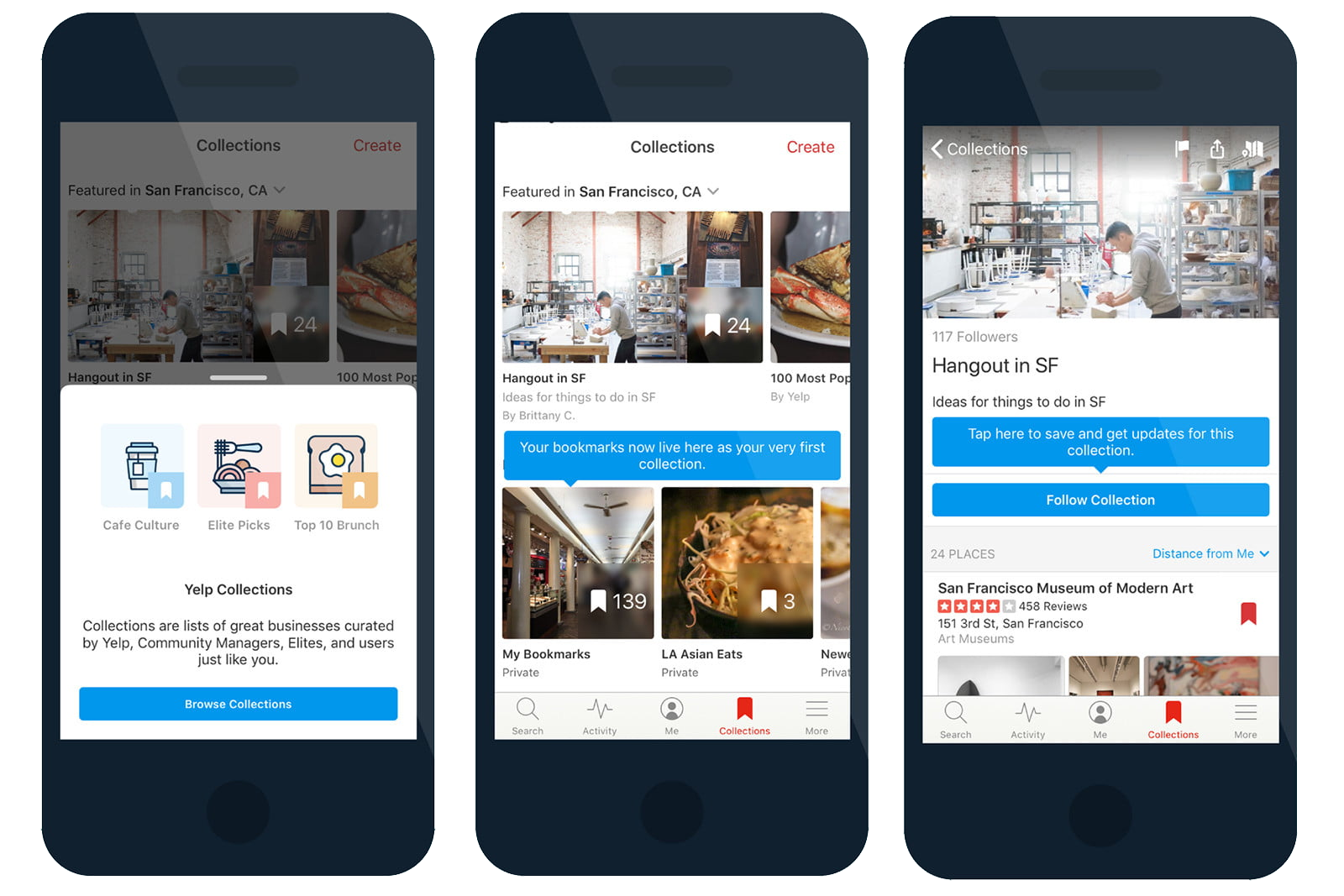 Visualization of the Collections Function in the Yelp Application. Source of the image

Yelp Annual Revenue (December 31, 2018)
Advertising. According to the Yelp financial report for 2018, the company received 97% of its revenue from various types of advertising on its site and partner advertising integrations. These are mainly the following services: Operating revenue. Yelp has developed several tools and features to simplify transactions between service providers and their customers. In 2018, transaction income amounted to about 1% of the company's total revenue. Here are examples of such integrations: Other services. Yelp also offers a range of services that enhance the user experience and marketing opportunities. Here are a few of these services:

Development from scratch. Expensive and long, but this is the best approach if you need a unique product with the desired set of features. The process can be significantly accelerated and shortened if you hire an outsourced development company. 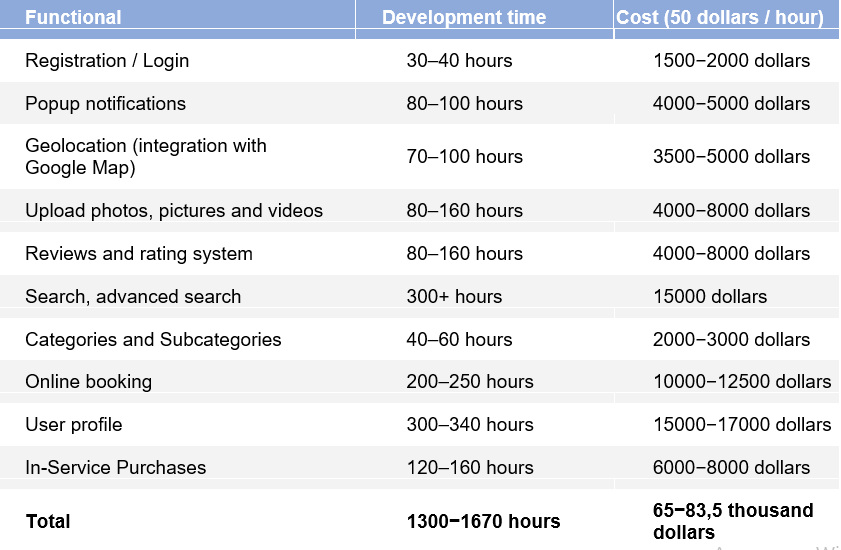 SaaS and white label solutions. Almost ready-to-launch solution that you resort to if you want to launch the site as quickly as possible, and reduce startup costs. In addition, usually SaaS solution providers assume the support and development of the platform, which also simplifies the process of launching their site. Cost - from 20 to 1000 dollars per month. Cons - stereotyped and completely dependent on the SaaS service provider (in the event of a critical software error or supplier bankruptcy, you can’t do anything).

WordPress themes. This is the easiest option to run a clone of the Yelp site. You simply configure WordPress CMS, download the theme you need and activate it after a little setup. The cost of a Yelp clone is usually in the region of 50-500 dollars, but you can find free options. The minuses - the stereotypenes and low security of the site and users' personal data. In addition, some topics require an understanding of how to connect and configure the necessary plug-ins (integration with Google Map, Google Ads payment gateways, etc).

Merehead review. Vleppo is a startup, digital asset exchange platform based on the Komodo blockchain protocol.
Category: Development 10/25/2021
How to Build an Ecommerce Website Like Amazon
Previously, we wrote how you can develop a social network like Facebook. Today we will see how it is possible to build a large project with Amazon functions. Amazon is one of the largest e-commerce projects in the world. It was founded in 1994, when the Internet only developed. Amazon made a huge success in the early 21st century. Today, it generates sales of $136 billion with a net profit of $2.4 billion. On this platform, you can buy almost any product. This is a big machine for sales. In addition, it gives an opportunity to earn small business and sellers. 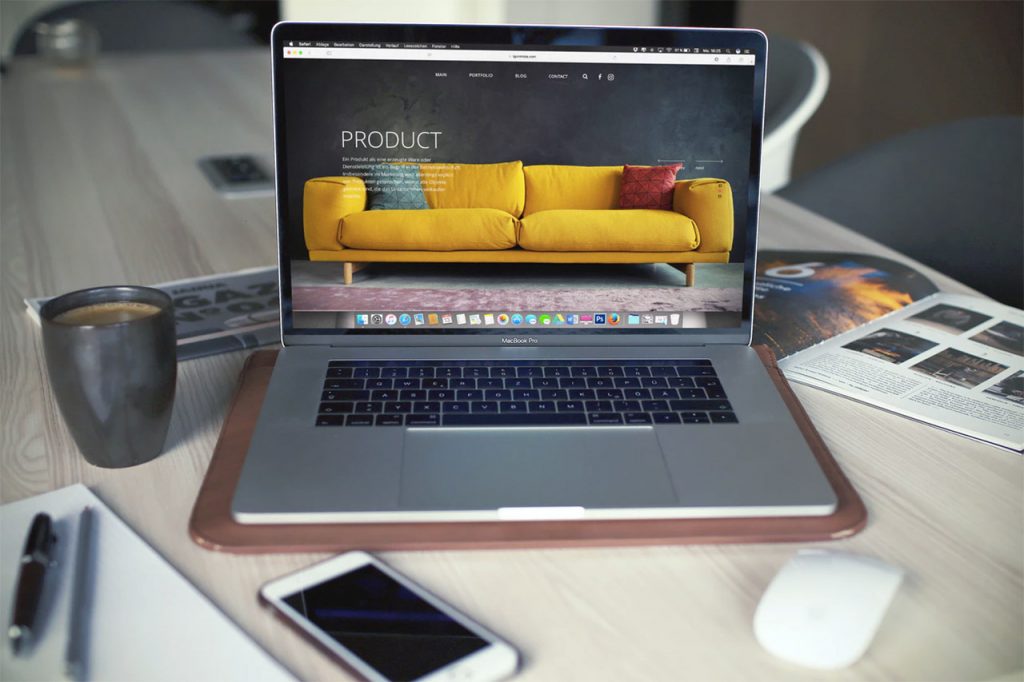 Category: Development 04/17/2020
How to Build Multi-Vendor (Peer-to-Peer) Marketplace Website like Etsy
Probably, at least once a week you visit popular resources like Amazon or Etsy - after all the assortment of the items, affordable and not really prices to the average buyer. Why you should go to the retail store if you can order the same item but cheaper and besides get free shipping. Even if you are not an American, website like Amazon, Etsy, Alibaba, and Aliexpress are very flexible and allow you to deliver items to Europe, South America, and even Africa. 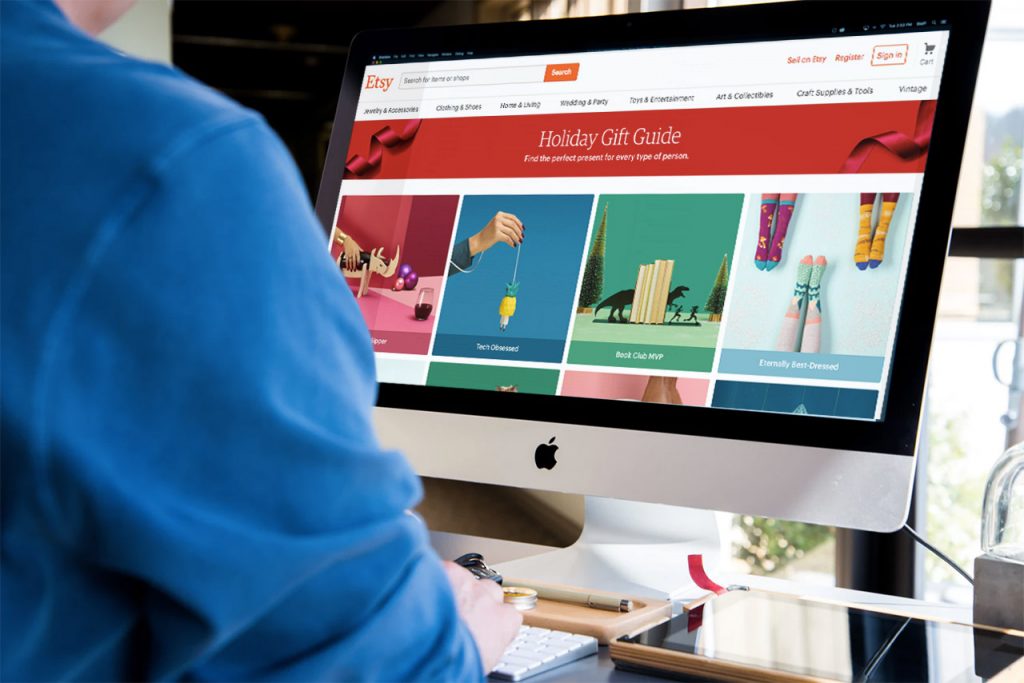 Category: Development 01/16/2023
How to Build a Decentralized Online P2P Marketplace on Blockchain Like OpenBazaar
Decentralized marketplace is an e-commerce platform where buyers and sellers make deals directly with each other through peer-to-peer networks. Such sites are user-driven and are usually based on blockchain technology. 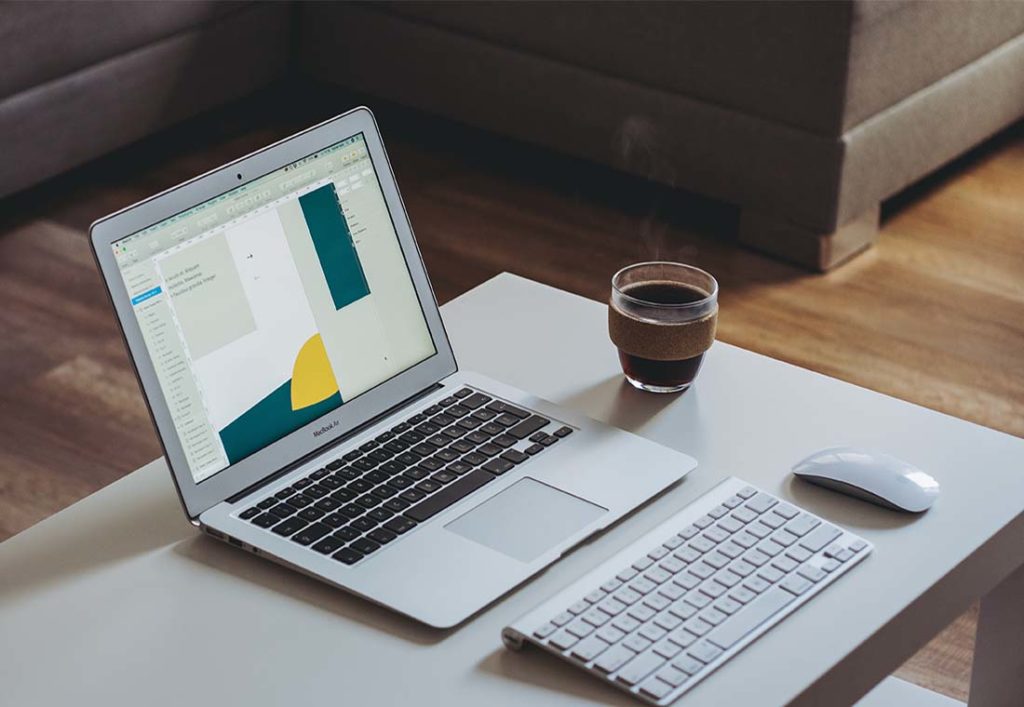