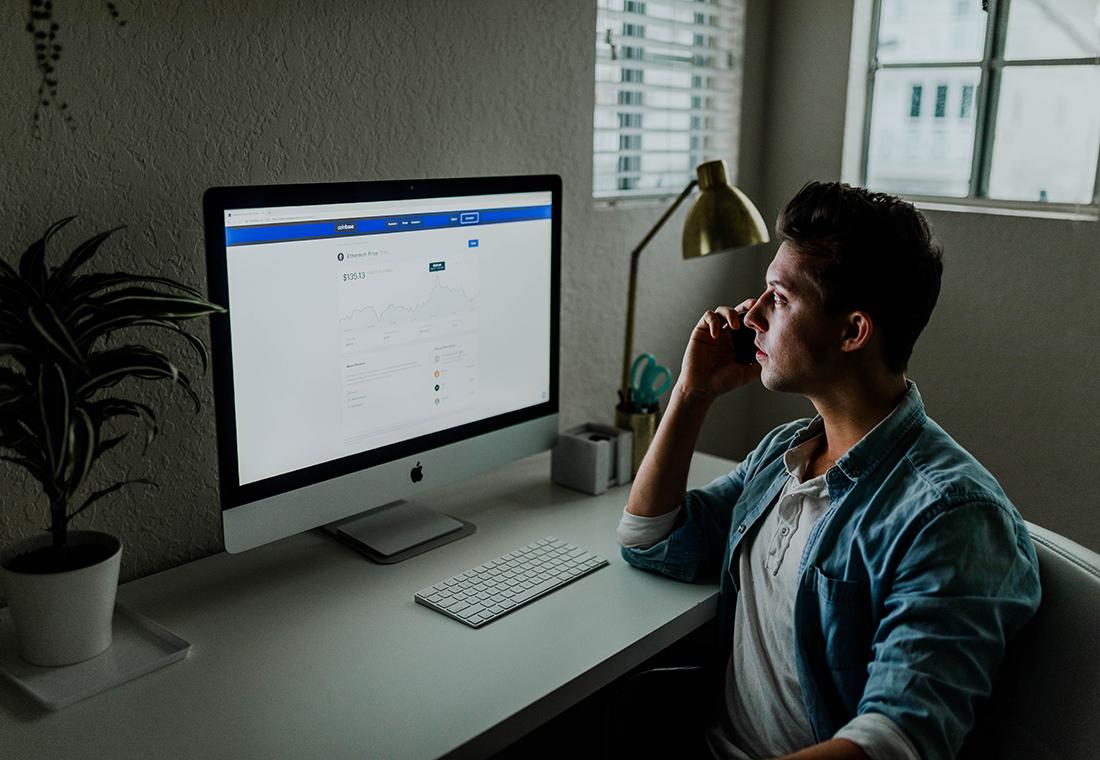 5 Benefits of the Blockchain Payment System

Write to Yuri
Merehead / Blog / Blockchain / 5 Benefits of the Blockchain Payment System
Do you have any questions?
Yuri Musienko
Write to author

In recent years, not a single large payment system has remained that would not announce the use or implementation of the blockchain in its services. Western Union, Visa, Mastercard, PayPal, SWIFT, as well as large commercial and central banks all show great interest in the distribution register technology and are moving from theory and testing to the practice of blockchain transfers. Next, we consider what caused the increased interest in blockchain technologies.

Blockchain is a new way to build databases. Its peculiarity is that in addition to storing information about transactions, the database itself is a source of "truth", where “truth” means confidence that the information on the network is genuine and was not entered into the blockchain without the consent of other users. 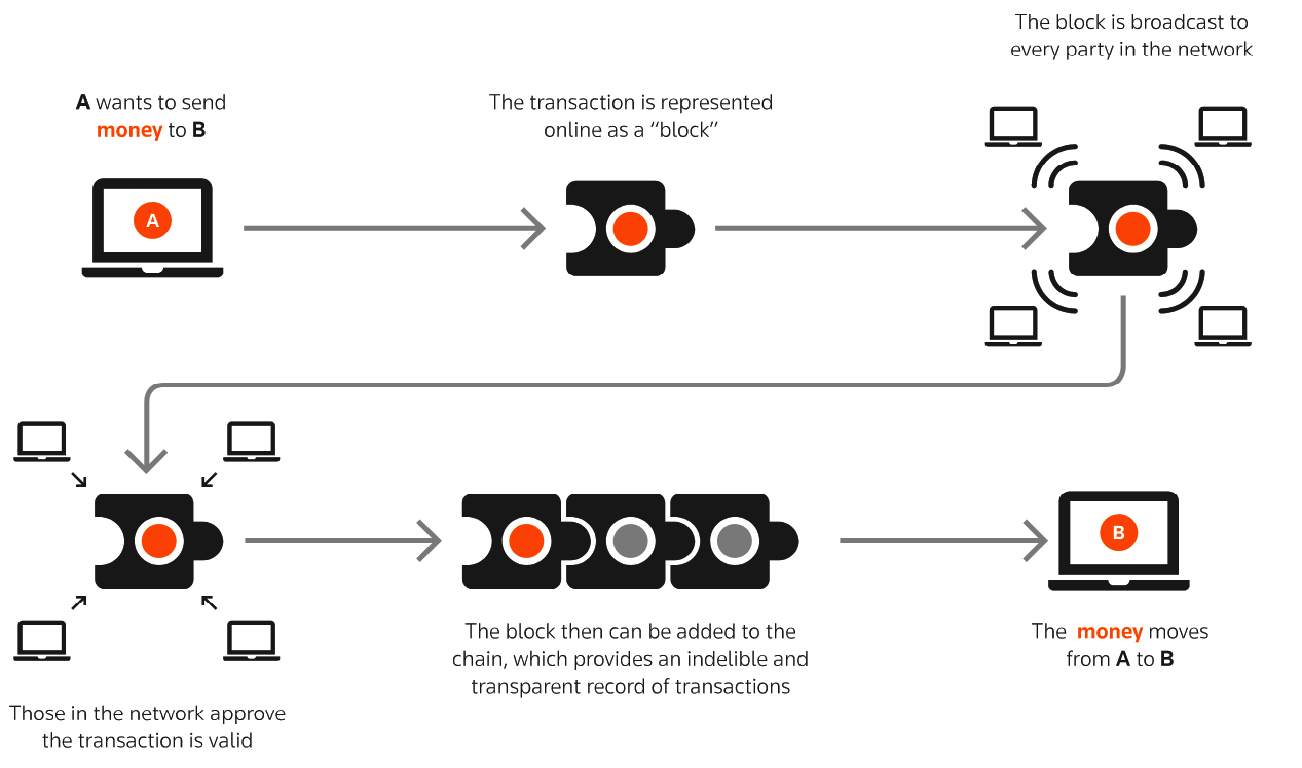 Blockchain transaction scheme using the Bitcoin network as an example. Source of the image

This is achieved due to the fact that the information in the blockchain, relatively speaking, is recorded in “layers” (blocks) and all of them are stored in the system. It is impossible to delete or make any changes to the old “layers”, and the database itself is not stored on one server, but in the form of multiple copies of itself on the devices of network participants (nodes). In this case, the information entered in one copy is automatically duplicated in all other copies.
Next, using real examples, we will look at the advantages of the blockchain architecture for use in payment systems.

How it is now. The modern payment services market is a huge industry, most of which is divided between several major players: MasterCard, Visa, American Express (AmEx), PayPal and others. They account for the majority of financial transactions, and therefore they are entitled to dictate their terms. And although the competition forces them to become more friendly to end users, they are not yet ready to give up certain things.

For example, from an excessive number of intermediaries. Thus, a typical financial transaction using a card requires the buyer to authorize the seller to "withdraw" money from his account, passing through several intermediaries.

Intermediaries for traditional card transactions. Source of the image
In addition to the seller and the cardholder, in the transaction are participating:

These intermediaries are designed to ensure the integrity of the exchange of values (money for goods) by keeping information about who transferred the money to whom and under what conditions. In addition, each of the intermediaries charge a fee for their services, increases the time of the transaction and makes it less safe and reliable.

How it will be with the blockchain. Since the blockchain itself can be a source of “truth”, that is, it can confirm the integrity of a transaction, payment systems based on it do not need intermediaries. Therefore, the buyer and the seller can make a direct transfer of funds (peer-to-peer payment) and the system will save the transaction data. However, unlike traditional transfers with intermediaries, this data will be 100% accurate and authentic.

First successes (cases). Such cryptocurrencies like Bitcoin or Ethereum are a great example of payment systems where intermediaries are not needed. Any person can start a cryptocurrency wallet in a couple of minutes, replenish it and use it as a usual means of payment. Now you can replenish your wallet as you please, even from an ATM.

Bitcoin payments do not need intermediaries. Source of the image

Banks are also introducing the blockchain, because in this way they can refuse to participate in central banks in operations that are needed for currency conversion. A striking example is the Blockchain World Wire platform, developed by IBM based on the Stellar blockchain. Using the IBM platform, the parties jointly choose a stablock, cryptocurrency, or any other digital asset and then use it to convert one fiat currency to another.

IBM claims that the new system:

How it is now. In early 2016, unknown hackers gained access to the accounts of the Central Bank of Bangladesh. They managed to hack into the accounts of bank employees and the SWIFT system itself and eventually kidnap more than $ 80 million. In this case, as reported by Reuters, the attackers could steal about $ 1 billion, if not a banal mistake. Hackers made a misprint in the name of one of the companies, which transferred stolen money to their accounts. A Deutsche Bank employee noticed a misprint and called Bangladesh to confirm the transaction.

After checking it turned out that this is a scam. And since it was opened at an early stage, most of the money was returned. However, the scandal had place. The story of hacking one of the central banks and SWIFT showed that even the most seemingly protected systems are vulnerable. Later in SWIFT, they recognized another similar case, which further reduced the level of trust in the banking system.

How it will be with the blockchain. Platform based on the blockchain and distributed ledger (DLT) can help banks protect transaction information in several ways:

First successes (cases). The most famous example of using the blockchain to ensure payment security is the Interbank Information Network (IIN), launched by JP Morgan in 2017 in partnership with 75 banks (there are 240 banks online). IIN is a private banking platform based on the Quorum blockchain, the main purpose of which is to securely and quickly exchange information between banks.

In addition to high security, IIN will allow to:

In addition to JP Morgan, the implementation of the blockchain is handled by Visa, which launched the blockchain platform Visa B2B Connect to identify parties to cross-border operations. MasterCard is developing a system for instant payments. The US Federal Reserve is also interested in distribution registry technology to improve the security of its data and interactions with counterparties.

How it is now. Cash transactions within one country are quite fast — one or two minutes. This speed is more than enough for the private sector (purchases, payments, transfers) and for business. However, as soon as money needs to be transferred from one country to another, difficulties arise. Such an operation takes 1–5 days.

The low speed of international transfers is due to the fact that money passes through several intermediaries, which theoretically should reduce the likelihood of losing money or user data (and also to earn more money on commissions). Usually everything happens according to this scenario:

In most cases, the money in the account of the beneficiary bank turns out to be within a day or even a few hours if the amount is relatively small. But the receiving bank is not in a hurry to send funds to the final beneficiary’s account, following the so-called “three-day model of good funds”: it is believed that if within three days nothing arose that would mean fraud, then the money is most likely “clean”.

This rule really reduces the level of fraud, so banks are unlikely to refuse it. Consequently, if a paradigm shift does not occur, cross-border transfers will continue to take 3–5 days, despite the development of innovative technologies in terms of speed and security.

How it will be with the blockchain. Even the rather slow Bitcoin blockchain allows you to transfer funds from one country to another within a few hours. If the transaction is carried out through the Lightning Network, then its speed will be reduced to a few thousandths of a second. At the same time, to change one transaction in the Bitcoin network, you need to spend more than 7.5 billion dollars (a similar attack on Ethereum costs more than 600 thousand dollars).

First successes (cases). The most successful acceleration-oriented project is Ripple (XRP). Unlike Bitcoin, Ethereum, Dash and other cryptocurrencies that want Fiat in the cash settlement system, Ripple was created to become a cryptocurrency intermediary. That is, if the bank needs to transfer money, for example, from the USA to Japan (USD to JPY), then it transfers USD to XRP, and then XRP to JPY. Such an operation does not require any other intermediaries.

The international transfer scheme involving the Ripple platform is especially useful if you need to convert currencies that are not directly converted. Usually, in these cases, the original currency is converted into dollars, and then the dollars are converted into the desired currency, which increases the cost of the transaction.

How it is now. The cost of a conventional banking transaction within the country wavers around 1−3% of its size, if these are payment transactions - 0.1−0.5%, cross-border - 3−10%. If the money transaction is carried out through digital payment systems, such as PayPal, the commission will be from 1.9 to 3.4% depending on the amount of the transaction (+ the cost of transferring money from PayPal to Fiat).

If you use cryptocurrency for money transfers, then the price of such a transaction will be even lower. However, it is necessary to add to it the cost of converting cryptocurrency to Fiat (from 0 to 10% depending on the fiat currency, cryptocurrency and the selected exchanger), which will slightly increase the costs. However, the size of these costs will decrease over time as the market for cryptocurrency assets.

First successes (cases). In January 2019, one of the largest conglomerates in the world, the British HSBC, reported on its success in introducing the blockchain into forex currency transactions. The report says that their system called FX Everywhere for 2018 processed more than three million operations (from 3000 to 5000 transactions per day) for a total of $ 350 billion and managed to reduce bank expenses by 25%.

How it is now. The anonymity of monetary transactions may be violated by hackers or by the state. If we talk about the first case, the study «Cost a Data Breach», commissioned by IBM, showed that the financial sector in 2018 lost up to $ 4 billion due to theft of business and personal data of users. The average cost of one stolen record was $ 150. 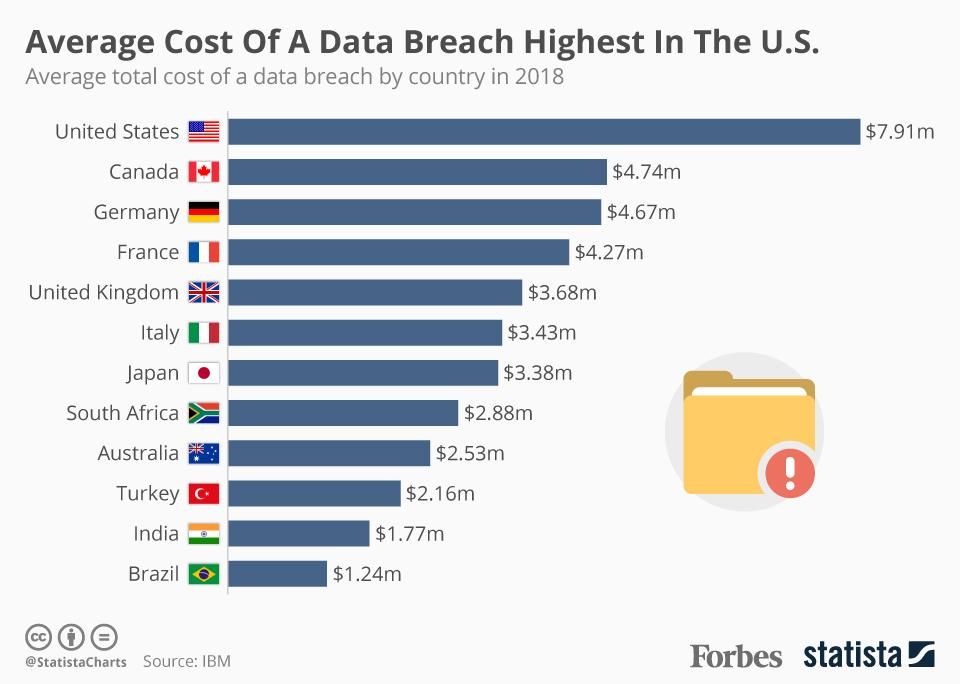 Average cost of personal and business data leaks in 2018

If we talk about the threat of anonymity of users from the state, here we can mention the 2001 precedent, when the US Treasury, the FBI and the CIA got access to the SWIFT system to track the money transactions of those whom law enforcement authorities suspected of terrorism. In other countries there are similar precedents when the authorities, using tragic events, expand their powers so that they can view the personal data of citizens without trial.

How it will be with the blockchain. Today, only platforms based on the blockchain (or its analogs, for example, based on DAG or Heshgraf) can be completely anonymous and at the same time safe. This is possible thanks to three things:

First successes (cases). In 2017, JP Morgan integrated the security protocol with zero disclosure (ZSL) into Quorum. ZSL is a protocol developed by the Zcash development team (cryptocurrency) to transfer digital assets without disclosing information about the sender, recipient, and number of assets that are transferred.

In mid-2018, it became known that Mastercard had patented a system for performing anonymous blockchain transactions, which would use the technology of mixing money, as in Dash cryptocurrency. If we talk about cryptocurrency payment systems, the most anonymous ones are: