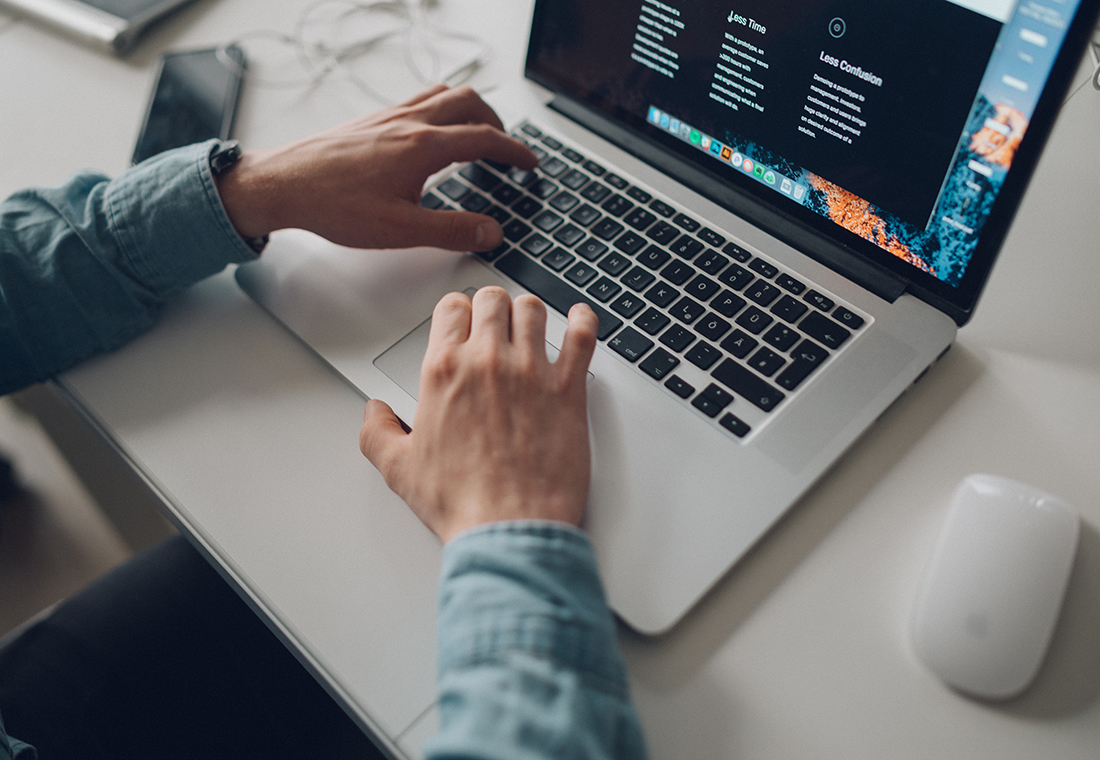 How Much Does Blockchain Implementation Cost?

Write to Eugene
Merehead / Blog / Blockchain / How Much Does Blockchain Implementation Cost?
Are there any questions?
Eugene Tarasenko
Write to the expert

Using examples and specific numbers, we will tell you how much implementation of the blockchain in government services and business costs. We also indicate the price of developing and implementing cryptocurrency wallets, smart contracts, DApps and blockchain games.

France: 700 million euros. In an effort to reduce the level of bureaucracy, France intends to invest 700 million euros in the blockchain and other technologies that can reduce the level of bureaucracy in government structures. This is part of the program of Emmanuel Macron (announced during the election race), thanks to which it is planned to save $ 75 billion and reduce 120 thousand jobs in the public sector.

Australia: 1 billion Australian dollars. In July 2018, IBM won a tender for the introduction of blockchain technologies in Australia’s public administration systems. The size of the tender - 1 billion Australian dollars. According to Harriet Green, CEO of IBM Asia Pacific, the contract involves the introduction of a blockchain into information processing systems for departments related to the Department of Defense and Home Affairs of Australia. 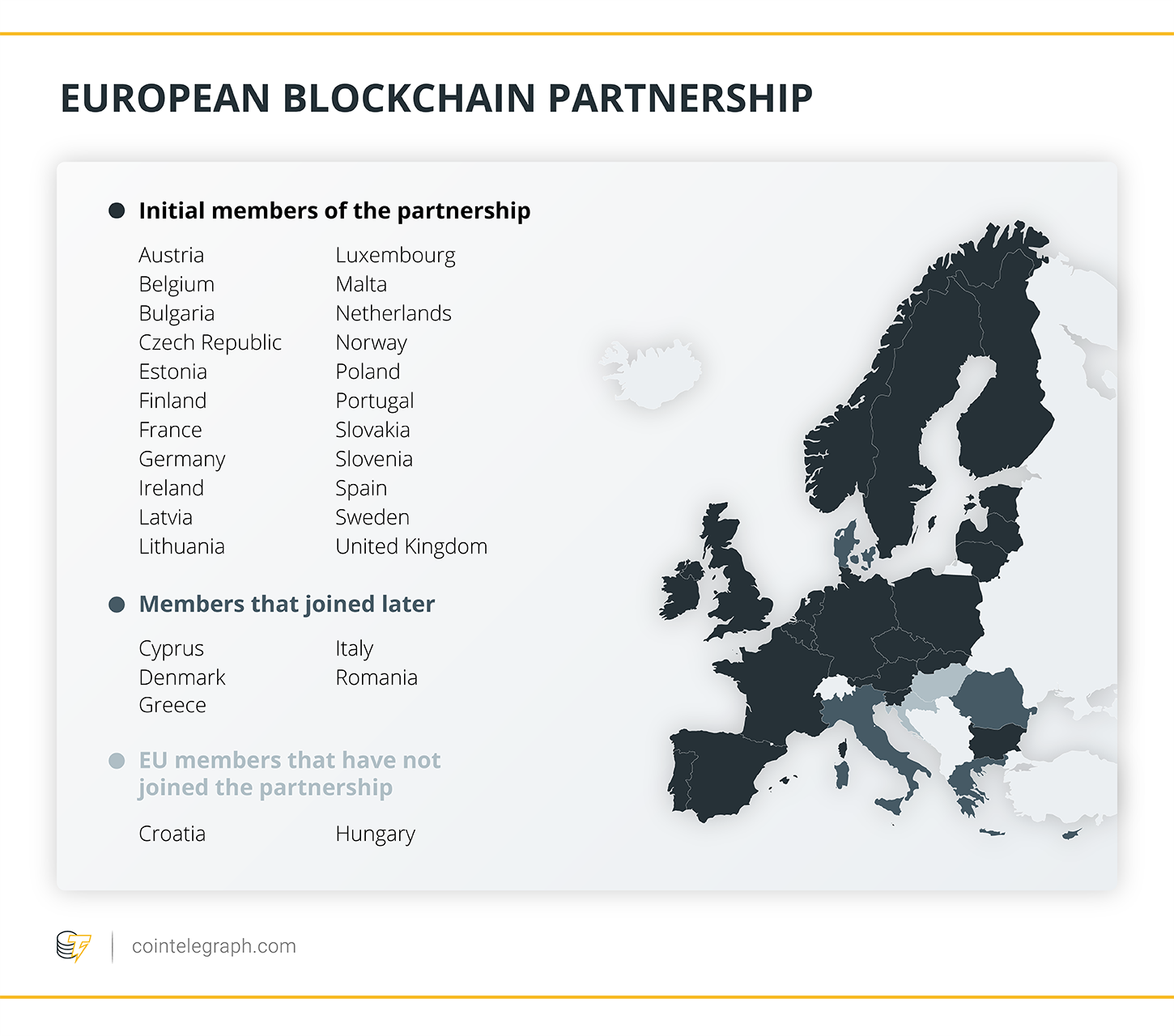 As of November 2018, the European Blockchain Partnership has expanded to 27 member countries and two partner countries. The European Union plans to spend 300 million euros for the development and implementation of EBSI.

South Korea: 200 million dollars. In June 2018, the Ministry of Science of South Korea announced a new “Development Strategy for the Technological Chain”, according to which it plans to allocate more than $ 200 million for the development and implementation of the blockchain into the state infrastructure:

Seoul City: $ 100 Million. Pak Wonsun, mayor of the South Korean city of Seoul, speaking in Zurich, said that by 2022 they plan to invest $ 100 million in creating the infrastructure of a “smart blockchain-city”. To do this, they will introduce new technology in 14 state services and create two blockchain complexes for “growing” startups, for which they will allocate about $ 50 million more.

Free of cost. The introduction of the blockchain into state structures does not always take place on a paid basis. Some companies are ready to finance such projects at their own expense, in order to monetize them in one way or another. For example, according to such a scheme, BitFury startup contributed to the introduction of the blockchain to the registration services of Ukraine and Georgia.

Most of the state projects for the implementation of the blockchain aimed at using existing platforms, rather than creating new ones. So, if IBM is involved in the case, the Hyperledger blockchain will most likely be used if it comes to real estate - BitFury, ATLANT or Propy.

The cost of commercial blockchain projects depends on many factors - the purpose of development, scale, industry, country, team, marketing, etc. - therefore, it is impossible to say exactly how much development and launch of a specific project will cost without knowing such factors.

But you can use the statistics of completed IOCs to look at industry averages and extrapolate them to similar projects. So, according to CoinDesk statistics, the average ICO size in 2018 was $ 31 million, which is almost two times more than in 2017. Fabric Ventures report gives similar numbers: $30 million.

$ 30 million is the average between all investments in ICO and the number of projects. This figure is heavily skewed up, as 25% of all money raised 20-30 startups out of 1000. For example, an EOS startup has gathered more than $ 4 billion. If you take the average median, you get $ 10-13 million for a project. 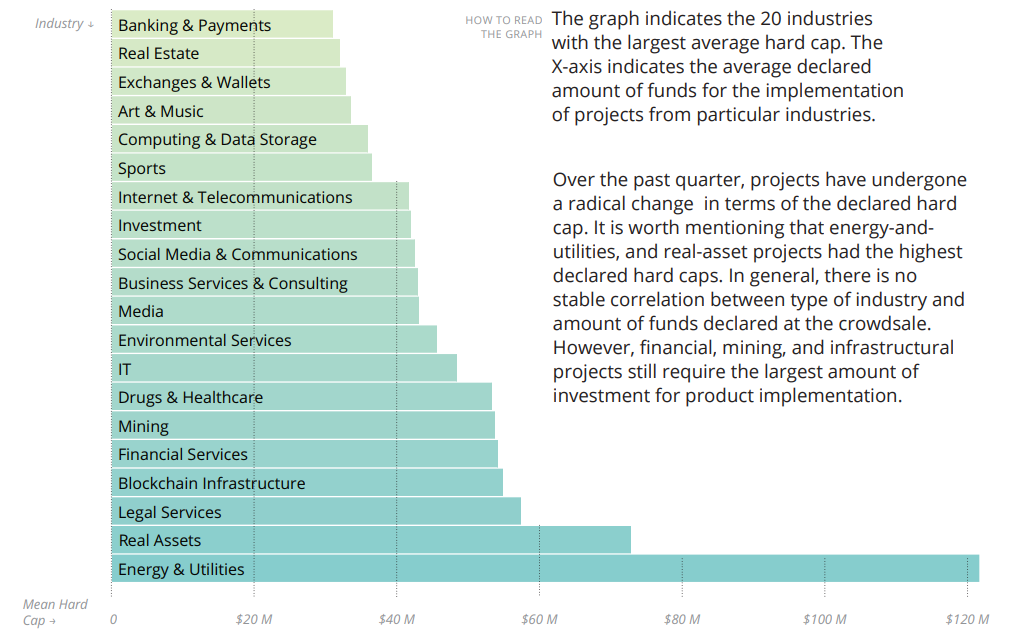 Hardcap projects by industry in the second quarter of 2018

In this case, it is worth considering the industry of application of the blockchain, since the cost of development largely depends on it. For example, the highest hardcap in startups that develop blockchain products in the fields of energy, utilities and legal services, real assets and blockchain infrastructure. 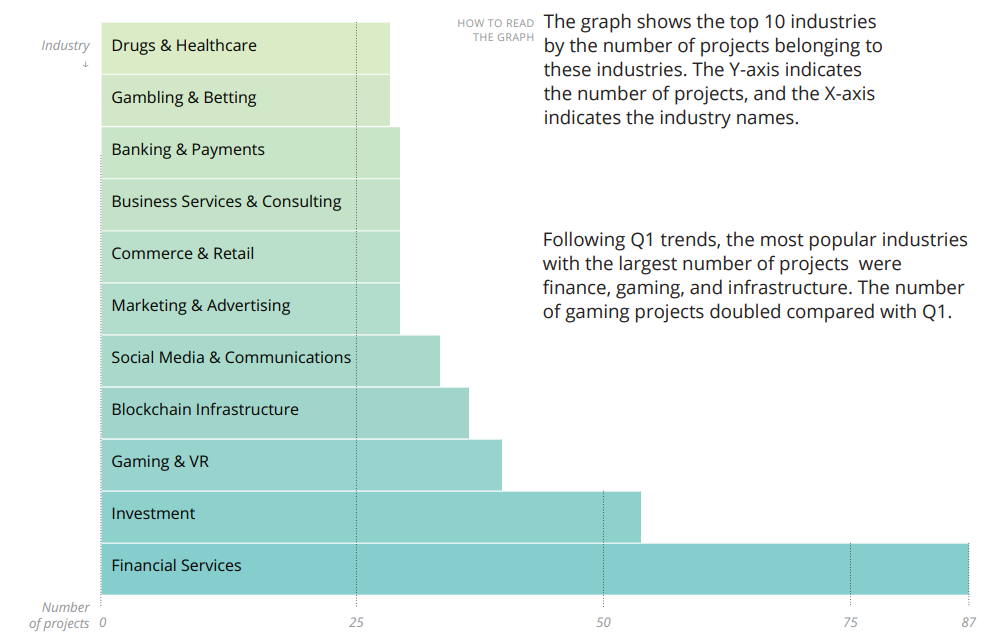 10 most popular areas of ICO-projects among investors

But such projects are not particularly popular with investors, except for investments in the blockchain infrastructure. They prefer to invest in finance, game services and investment related projects.

These statistics are taken from “ICO Market Research Q2 2018” (at the time of writing this article — November 2018 — there is no report for the third quarter) and it can differ greatly from the previous and next quarter. Averages for the entire 2018 will be available in January – February 2019.

Tokenization is the process of transition to digital asset management and accounting. Now blockchain technologies are best suited for this, since they increase the security and reliability of the system. A simple example: banks use digital money instead of paper and metal. 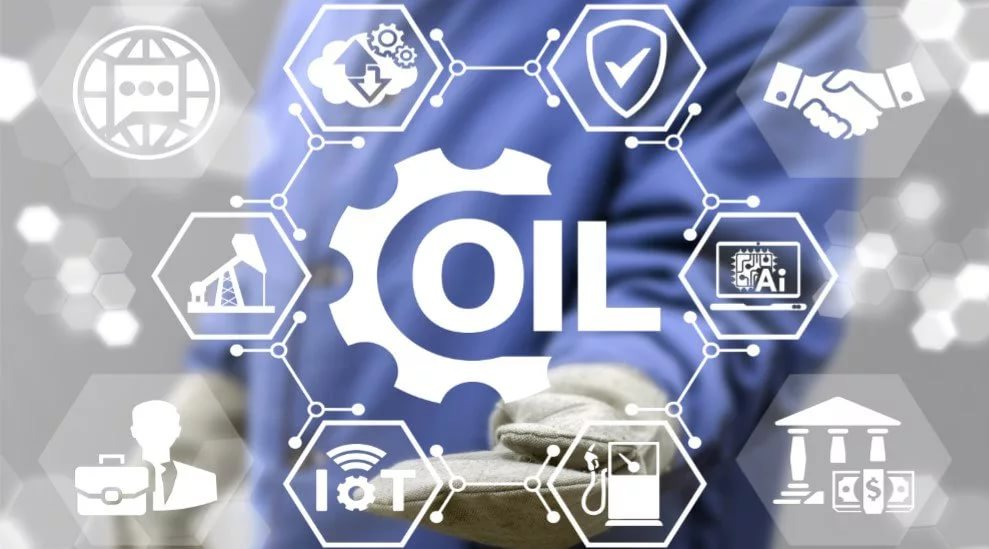 You can tokenize any asset that has a quantitative designation: a barrel of oil, a kilogram of gold, an hour of work, transactions in the transfer of documents, making entries in the registry, and the like.

The tokenization process can be started in three ways.

The estimated cost of hiring a development company depends on the type of project: what the customer wants and where the blockchain will be used. For example, the development of DApps starts from $ 1 thousand, smart contracts cost from $ 3 to $ 10 thousand. Sometimes more, sometimes less depending on the level of professionalism of programmers, portfolio, country and time.

The launch of ICO is a different story, because you need to:

All this requires a whole team of professional developers, marketers, consultants, managers and administrators, so the cost of such projects, as usually starts from $ 50 thousand. The minimum cost can vary from the location of the development company: in North America, their services cost from $ 50 thousand, in Europe - from 30 thousand, in India, China and Eastern Europe - from 10 thousand.

Another way to implement blockchain in your business is to hire a team of blockchain developers. It is cheaper, but much more troublesome, because you have to figure out what to do and how to do it, and also find professional performers. There are a few of them in this area of programming: about 5,000 thousand worldwide, according to William Mugayar, author of «The Business Blockchain».

To start and maintain an average project you need from 3 to 10 programmers who will create or implement an already created blockchain in your business: develop smart contracts, interaction interfaces, scripts, and so on. They can work both in the office and remotely. After the introduction of the blockchain, you can limit yourself to one full-time blockchain developer or do without it if the software product does not need constant supervision of a specialized specialist.

The amount of hourly pay for a blockchain developer in North America according to the site Codementor.io 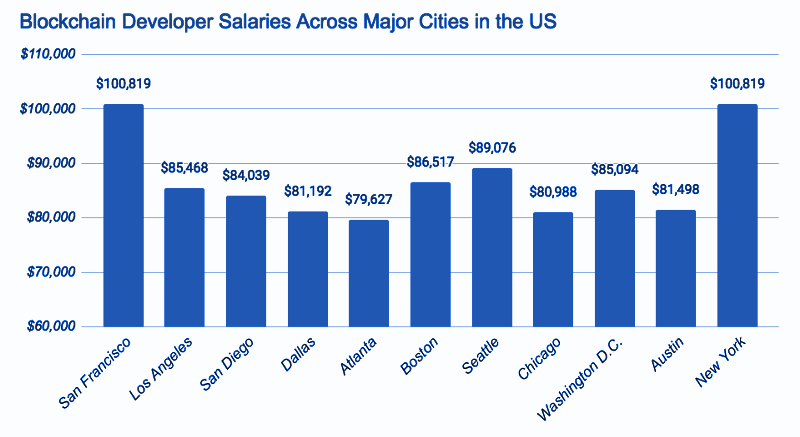 The amount of hourly pay for a blockchain developer in major US cities according to the site Glassdoor.com

Also, the average cost of payment depends on the country: 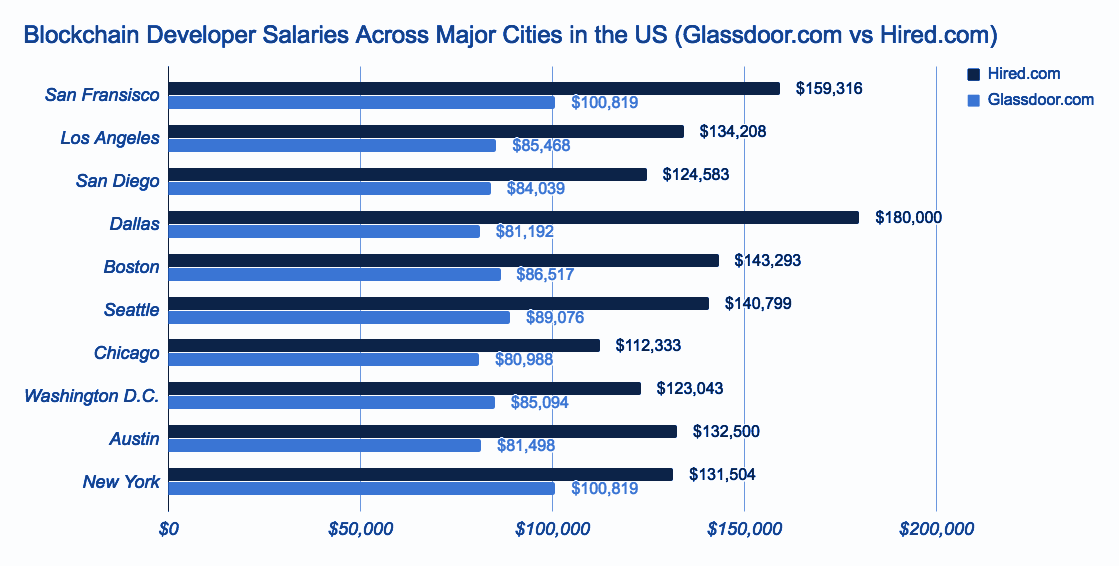 Wage blockchain developers in the US by city. Sources: glassdoor.com, hired.com

Use of the finished product

In some cases, you can do without hiring programmers. It is enough to train the staff to use the functionality of an existing blockchain to increase the efficiency and reach of their business.

● Realtors and real estate agencies can use the Propy, ATLANT and Midasium platforms to enter into sales transactions;
● marketers and advertisers can use adChain, BitClave, Adshares and AdEx platforms;
● for financial transactions, you can use any popular cryptocurrency.

The cost of developing and implementing a blockchain application in your business depends on the type of application, where the blockchain is used and who will do it. For example, the implementation of such an application as Uber in the United States will cost $ 220 thousand:

Other examples of the cost of developing and implementing blockchain applications in the States:

Many foreign developers prefer to receive payment in cryptocurrency (Bitcoin, broadcast), so the cost of their services in the price list and the actual cost can differ by 1-3%.

Creating a conventional cryptocurrency wallet costs about $ 35 000, if we are talking about a full wallet, and $ 15 000, if about a web wallet. The price depends on the scope and platforms on which the wallet works: Windows, iOS, Android, Web. 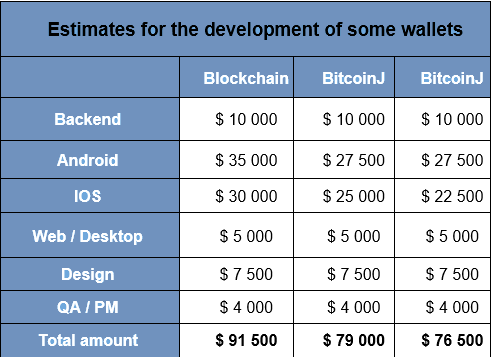 Creating your own wallet may be necessary for companies that want to use cryptocurrency for settlements with foreign counterparties. In such wallets are included the list of partners, access rights for specific individuals and limits with which they can operate.

The simplest smart contract without complex logic will cost $ 200–1,000. They can serve simple operations of transferring values from one side to the other, but no more. If you need to add a guarantor and enter the data on the transaction in a registry, the price will rise to $ 3-7 thousand.

More advanced contacts are even more expensive – from $ 50 thousand. They serve operations in which you need not only to transfer valuables, but also to guarantee the transfer of money, change documents, provide access to information, and enter data into registries and databases. Contracts with this logic serve the sale and purchase of real estate.

Services like MYWISH.io offer users to create a smart contract themselves, using constructs that collect contracts from code modules. The price of such a smart contract varies from 100 to 500 dollars. Perhaps in the future, such services will be in demand, but now their reliability is very doubtful.

Creating simple two-dimensional games like CryptoMonster, CryptoKitties and Go is cheap - up to $ 10 000. Larger projects, for example, Zombie Battleground, Augmentors, Yggdrasil Beyond the Void will require much more investment - up to $ 300 000, some - $ 1 million. 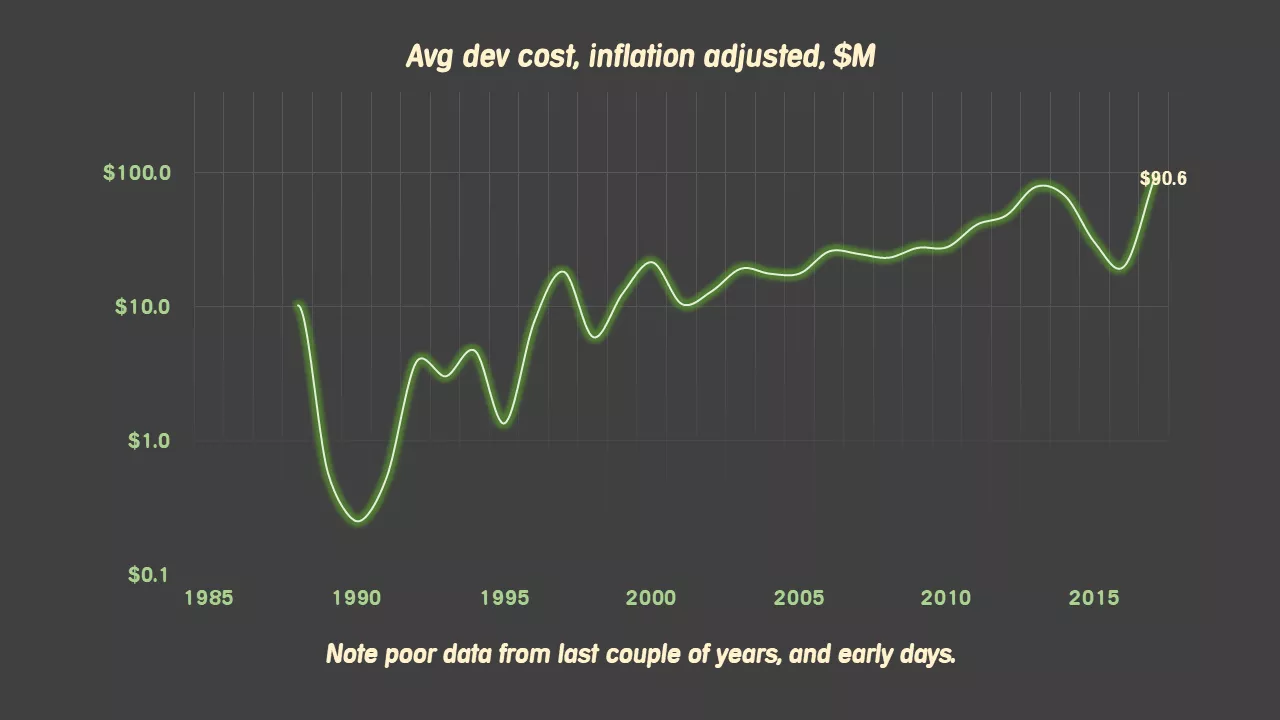 First. Examples of the cost of developing and implementing blockchain technologies are taken from open sources: news, web sites of developers, analytical articles and price lists. They give a orientative represent of the price range in the industry and do not pretend to absolute certainty.

Second. The eminent developer can not guarantee the quality of the order. For example, IBM has paid $ 30 million for damage to the Australian government due to a population census failure. The reverse is also true: “garage” programmers are not always a failure. For example, before the creation of Ethereum, no one knew Vitalik Buterin, and now it is a blockchain developer with a worldwide reputation.

Third. Each project for the implementation of the blockchain in the existing business or government structure is unique. Therefore, it is impossible to indicate its exact value. It will always be very approximate.

How Much Does Blockchain Implementation Cost? key takeaways:

Merehead does professional development of Blockchain Implementation. If you have questions, contact us for a free consultation.