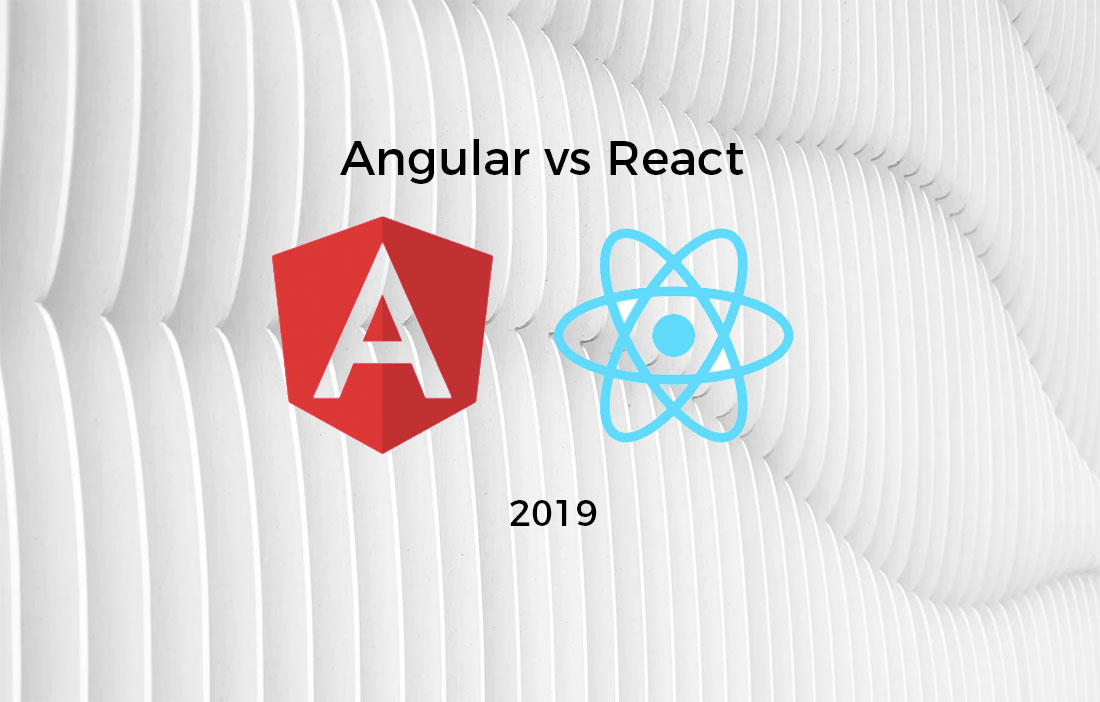 Write to Anna
Merehead / Blog / Trends / Angular.js vs React.js 2019 - What's More Popular?
Subscribe to our newsletter
You are the rock.
Thank you!

Website development, moreover based on the blockchain trends, is not easy. You can’t do anything without additional programs that facilitate part of the work. They are called frameworks. For those who do not know, the framework is software that facilitates and accelerates the creation and combination of various elements of a serious (in size) software project.

There are many different frameworks created for solving various problems, however, despite the flying time, Angular and React are the most popular ones.

In this article, we will compare the two most popular web technologies, and also consider the history of their appearance, the key differences, the main programming languages on which they are based (TypeScript and JavaScript). In general, these technologies have greatly simplified the reuse, refactoring and support of code for developers, dividing them into modules and components.

The purpose of this article is not to find the best technology but to compare, highlight and clarify several misconceptions. We will also focus on important points, not on small details that are unimportant in the long run.

We warn in advance that a full comparison of the two technologies is not possible because of their diverse functionality. Angular has a Model View Controller (MVC), and React is a front-line library with many open source packages for integration.

If you want to become one of the best web developers, start your own business idea, teach others, or simply improve your development skills, you should definitely learn these two technologies - Angular and React. 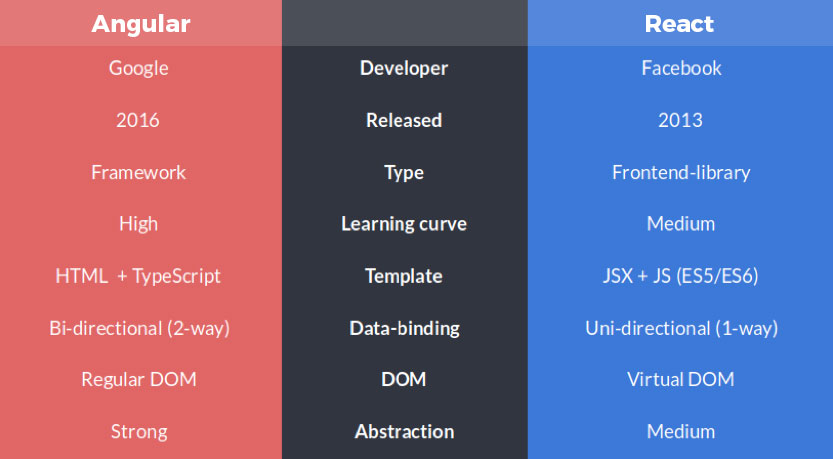 One of the main advantages of React in terms of performance is the Virtual DOM, of which you probably heard more than once, if you are an experienced developer. If not, do not worry, we will explain!

Let’s suppose you want to update the date of birth of a user in an HTML tag block.

It only updates the part that is required to view the differences between the previous and current versions of HTML. Exactly the same approach uses GitHub when detecting changes in files.

It will update the entire tree structure of HTML tags until it reaches the date of birth.

Why does it matter?

This may not matter for the problem described above. However, if we deal with 20-30 asynchronous requests for data on one page (and for each page request we replace the entire HTML block), this will affect the performance as well as the user's impression of the site.

First, a little history, as this will help us understand what will happen to development in the future. React was developed by Jordan Walker in 2013 and now is supported by Facebook, Instagram and some smaller organizations.

The new Angular (without “JS”) was announced in 2016, as the heir to its unsuccessful first version, which was released in 2009.

We will not go into details of what exactly happened between Angular and AngularJS, we are sure that there are many available resources where you can find information about this for everyone. But, in short, Google replaced AngularJS with Angular and JavaScript with TypeScript. If you came from the world of Java, C# or C++, the world of object-oriented programming (OOP), then learning JavaScript was not an intuitive lesson. In other words, it was a pain in the ass, which could only be pulled out after learning new technologies, a new programming language.

The point is not that the programming language that was used was imperfect or poor, the fact is that it has a different purpose. It was built to handle the asynchronous nature of the Internet, for example, to interact with users, bind events, transitions/animations and the like.

As Google Trends shows, Angular and React are two of the most popular web technologies in 2017 and 2018, as well as according to analysts' forecasts, also in 2019-2020.

Angular has more search queries than React, but this does not mean that one technology is better than another. This indicates that people consider Angular to be more interesting than React, perhaps because of the greater number of ready-made solutions.

One thing is for sure: both technologies are developing, their future has great prospects. But we still have to remember what happened to AngularJS. This can happen with React.

React has more than 100,000 codes and 300 ready-made solutions for current problems. React has an advantage in time since it was launched on the market 3 years before the appearance of Angular. And this means that he faced a lot of real problems, passed critical tests and, in general, turned into a flexible and convenient open library, which many people like.

Angular has 6 times more prepared solutions to various problems than React, is a much larger structure and has fewer developers using it, since it was released 3 years later than its opponent.

Multifunctional applications are being implemented on the web, on desktops, and also in the world of native applications.

Both React and Angular support native development and web development. Angular has NativeScript for native applications and Ionic Framework for hybrid. With React, you can use react-native-renderer to develop cross-platform apps for iOS or Android, react-native for native.

Angular Advantages
1. Presence of various functions, for example, RXJS, lightning-fast compilation (less than 2.9 seconds), modified start of HttpClient.
2. Thanks to the flexibility of the technology, all the necessary information can be easily obtained without engaging third parties.
3. Two-factor binding of information, which provides maximum security for applications, automatically minimizes the risks of potential errors.
4. MVVM - a module that allows you to separately operate in the same section of the application using the same data set.
5. Interdependence of functions, in view of their coherence with components and modules.

Angular Disadvantages
1. Difficult programming language, despite the fact that Angular uses TypeScript 2.4.
2. Integration errors that may occur during the transition from the old version to the new.

Pros and Cons of ReactJS
ReactJS is a JavaScript library created by Facebook in 2013, it is excellent for creating large-scale web applications where data can change on a regular basis.

ReactJS Advantages
1. Easy mastering. React itself is based on light programming languages, it enough to recall how HTML works and that's it, you're in business. No need to deeply study TypeScript, as in Angular, enough superficial knowledge.
2. High level of flexibility and maximum responsiveness.
3. DOM (document object model) allows you to combine HTML, XHTML or XML documents according to certain criteria, most often into a tree, so React is great for web browsers when analyzing various elements of web applications.
4. It feels great when working with ES6/7 ReactJS, and it can take any load on itself.
5. Linking data between themselves (in a certain direction, most often downwards) guarantees the immutability of parent data; descendant items cannot change the data chain.
6. An open-source JavaScript data library is being improved daily thanks to an open-source code, developers from all over the world are making technological contributions to the database.
7. Lightweight database, processes that occur on the part of the user, can be easily involved on the server.
8. Migration between versions is usually very simple, Facebook provides “codemods” to automate a huge part of the process.

ReactJS Disadvantages
1. The lack of streamlined documentation - the super-fast exchange of solutions in ReactJS leaves no room for streamlining the documentation, the documents are placed a bit erratically, since many developers individually enter them into the database without any systematic approach.
2. React does not stop improving, which means that developers have a huge choice of actions to solve certain problems. The number of these solutions can be confusing.
3. Huge time to study the aspects of technology work. React JS requires a huge amount of knowledge in how to integrate the user interface into the MVC structure.

React is a cool, flexible library of interface solutions designed and maintained by Facebook. This is one of the most famous open-source projects that is used today by many other companies, such as Instagram, Yahoo, WordPress, Walmart, and the list goes on (many of those companies improve logo in 2020).

DOM React is one of the best features in technology. Simply put, the Document Object Model is a web page in a browser. React has its own virtual DOM, which controls the actual DOM of the browser, and since it is much faster than the DOM of the browser, it greatly improves productivity. DOM React can create more than 200,000 nodes per second, which is higher than the average nodes for most sites. DOM can recreate changes by using the Diffing algorithm, which is able to reduce the calculation of the difference from O(n3) to O(n). Differential algorithm is an autonomic function that reveals the potential of React. 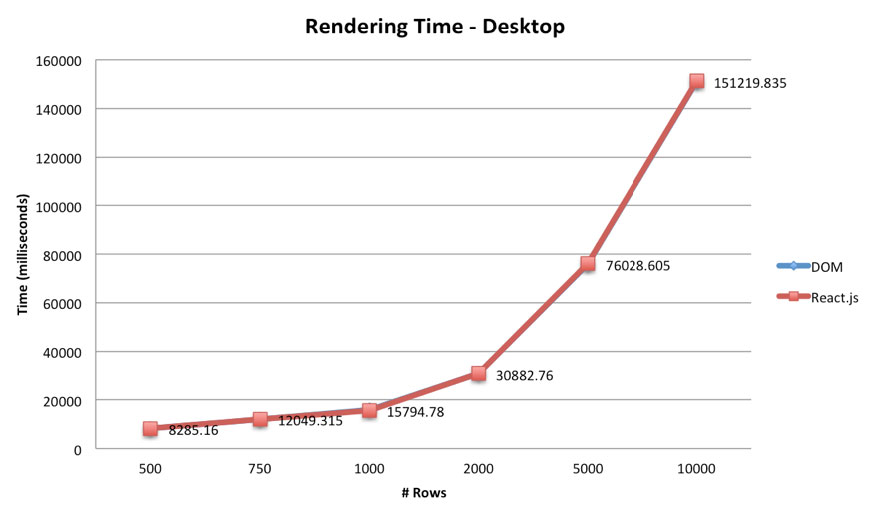 One of the great features of React is the introduction of JSX (an extension of the JavaScript programming language).

You must understand that JSX is not the HTML, and not the Javascript. The beauty of JSX is that it helps the developer to visualize the contents of the pages, it is much easier to write on it than on traditional JavaScript.

Angular and React are two pretty software testing trends, acquaintance with which entails the desire to use both. Let's compare them face to face to get more comparative characteristics that will give a more detailed understanding of their functionality.

Angular has a lot of features, but at the moment they are considered obsolete. Of course, the reason for this is that Angular was not created and developed for server work, although there are methods for using Angular through servers.

React is fairly easy to integrate into your underlying technology, even with strict MVC. React is great for both server-side rendering and client work. React is well maintained and regularly updated, so if your goal is to preserve all the functionality, React is perfect for you. There is good news too. It lies in the fact that most of the basic infrastructures can be launched and created in API mode, it does not require as many software packages or libraries as before. 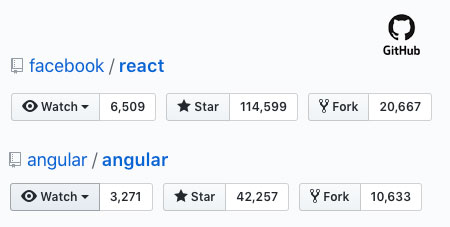 You cannot choose the best framework among React and Angular, it all depends on what you plan to work with. Both frameworks have a lot of different advantages. If you need size and simplicity, flexibility, you like large ecosystems, you like to choose from dozens of projects the best solution for you will be React. If you need the greatest number of functions with the greatest number of possibilities, while you are not afraid to master a new programming language, manual and structure, pure HTML files, Angular is the best solution. Both technologies are good in combat, technology participants are very responsive and ready to provide help if that is needed.