Features and Differences Overview of Bluetooth 5.0

Write to Alexander
Merehead / Blog / Other / Features and Differences Overview of Bluetooth 5.0
Subscribe to our newsletter
You are the rock.
Thank you!

A detailed overview of the Bluetooth 5.0 wireless communication protocol. Changes and updates that a new version includes compared with Bluetooth 4.2.

Bluetooth 5.0 is a new version of a wireless communication protocol, which provides information exchange within a short distance between different devices. Compared with version 4.2, the new Bluetooth version provides twice the speed of receiving and transmitting data and four times the range of devices, increases the reliability of wireless communication, and adds a range of other useful innovations. Later, we will tell you what Bluetooth 5.0 is and analyze its new features.

The technology was created in 1998 by a group of commercial companies, which had been looking for a way of wireless signal transmission between a phone and a laptop. This group included Ericsson, Intel, Nokia, Toshiba, and IBM. Engineers of these IT giants developed a new radio protocol with a short range to replace wired connections between various gadgets and household appliances. The new technology was named Bluetooth. It was more power-efficient, compact, and cheap (in terms of production) than any other analogs.

Currently, an organization called Bluetooth Special Interest Group is engaged in technology development — this is a group of more than 36 000 commercial and non-commercial companies, which include Microsoft, Lucent, and other organizations, the activity of which is quite closely related to communications and various network technologies.

As the Bluetooth interface uses radio communication, this means that they should have special Bluetooth chips to receive and transmit radio waves to provide a connection between devices. This also means that connected devices shouldn’t be in direct line of sight (however, there shouldn’t be obstacles, which are insurmountable to radio waves, between them). The signal transmission range depends on the Bluetooth version and the power of the devices. Usually, devices can connect properly within a 10-20-meter range with obstacles (walls, ceiling, furniture, human body, clothes) and 50-250-meter range – without obstacles.

A signal is transmitted in the ISM band (Industry, Science and Medicine), which is usually used in electronic gadgets, household appliances, and various commercial wireless networks. Signal frequency: 2,402-2,48 GHz (or 2402-2480 MHz).

To improve the communication quality, the spectrum spreading method with the so-called frequency-hopping spectrum spreading (or FHSS) is used. Due to that, it’s possible to ensure resistance to broadband interferences. Besides, FHSS is relatively easy to implement and it doesn’t require expensive equipment.

The FHSS can be briefly explained like this: a wireless communication module breaks data into a big number of small information packets and transmits them with the help of a pseudo-random algorithm with frequency hopping (about 1600 hops per second) or via a pattern, composed of 79 channels. In such a system, only those Bluetooth chips, which were initially configured to the same patterns, can «understand» each other. And for other devices, such a radio signal (data) will only be a radio noise. Thus, the FHSS protocol provides Bluetooth connection only between specific devices, which the user (users) have specified.

Therewith, several devices connected via the same patterns can be combined into «a piconet». This is a centralized structure, where one device is a master and other devices are slaves. The master defines the piconet pattern, which all slaves are going to work on, and synchronizes its work. The maximum number of devices in the piconet is eight slaves with one master.

Piconets in Bluetooth can work independently as well as jointly within a peer-to-peer network — «scatternet». To do so, piconets should have at least one common device. Due to the scatternet, you can connect up to 10 piconets and 71 slaves. In addition, there is an opportunity to use gate devices to connect devices over a long distance via the internet.

A schematic representation of a Bluetooth piconet and scatternet. Source

Review of key improvements of Bluetooth 5.0

Starting with version 4.0, the Bluetooth protocol supports two types of devices. The first one is Bluetooth Classic (BR/EDR). It’s used when you need to transmit large amounts of data «through the air»; for instance, in automotive entertainment systems, audio headsets, or wireless speakers.

Another type is Bluetooth Low Energy (BLE) devices, which consume a relatively small amount of energy. It’s more often used in systems that require low-energy consumption (for example, in battery-powered devices) or in apps, which transmit small amounts of information with big breaks between communication sessions (for instance, in sensors of environmental parameters, various switches, and other IoT devices).

BR/EDR- and BLE devices are incompatible even if they have the same specifications and are released by one brand. For this reason, some devices such as mobile phones or laptops support both connection types. Such an approach is usually called the Dual-Mode Bluetooth.

Where BR/EDR-, BLE-, and Dual-Mode Bluetooth are used. Source

Since 2010, the IoT market has been skyrocketing (and the number of sensors and devices, which require the BLE module, along with it), due to which BLE became a more common protocol compared with BR/EDR. Bluetooth Special Interest Group noticed this trend and released the Bluetooth 5.0 update, a large part of which is aimed to improve the BLE protocol’s work.

Here is a review of the most important features of Bluetooth 5.0.

Bluetooth is both a hardware-based radio system and a software stack that specifies the linkages between the architecture layers of the two. The heart of this specification is the protocol stack, which is used to define how Bluetooth works. The Bluetooth protocol stack is a set of layered programs. Each layer in a protocol stack talks to the layer above it and the layer below it. These layers range from the lower-level hardware-based radio system to an upper-level software stack that specifies the linkages between the layers. 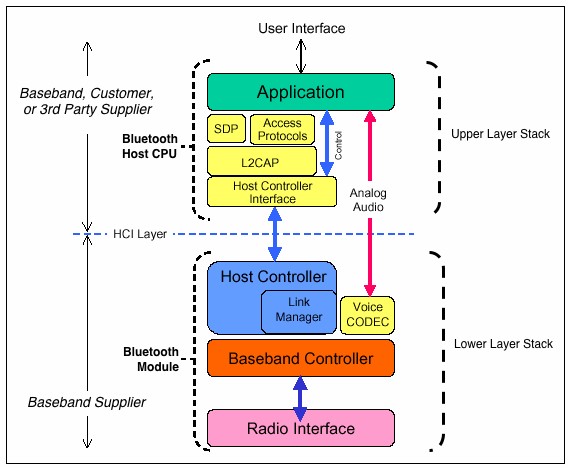 The bottom layer of the stack of Bluetooth protocols is called the Physical Layer and is normally referred to as PHY. According to an official Bluetooth 5.0 review, a new protocol version adds two new PHY variants to the PHY specification used in Bluetooth 4: LE 1M, LE 2M, and LE Coded. The first two options of PHY specifications are mainly used for the transmission of streaming data at close range. LE 1M is Bluetooth 4 and LE 2M was presented in Bluetooth 5.0 and it allows the physical layer to operate at 2 Mb/s (in theory, it can be 6.25 Мb/s).

Along with the Data Length Extension (DLE) feature, which is presented in Bluetooth 4.2, the new PHY level is going to allow increased speed and amount of data that can be transmitted via the BLE 5.0 channel. For devices and apps, which don’t require higher speed, 2Mb/s connection will make it possible to halve energy consumption because these devices will require half as much time to transmit the same amount of data (compared with Bluetooth 4.x).

This became possible because raw data is still transmitted at the speed of 1 Mb/s in Bluetooth 5.0, but now this data includes double or eightfold redundancy and a feature of forward error correction (FEC), which cuts the chance of data loss during the signal transmission.

Here are different options for PHY and speed available in the version Bluetooth 5.0:

The new Bluetooth version also extends the functionality based on the location determination, which can encourage the introduction of technologies like BLE Beacons to increase the accuracy of navigation indoors in such places as railway stations and malls. It became possible due to more opportunities for information transmission to other devices without the necessity to actually connect to them.

Previous versions did it to notify you of a name, nature, and quality of connection to another device, but Bluetooth 5.0 is capable of much more: increasing the capacity and payload, combining data packets into one chain (maximum – 1650 bytes), sending data packets in given periods. All that can be used to receive information about your location from BLE beacons without the necessity to install the app or set up the connection.


Key differences between Bluetooth 5.0 and 4.2 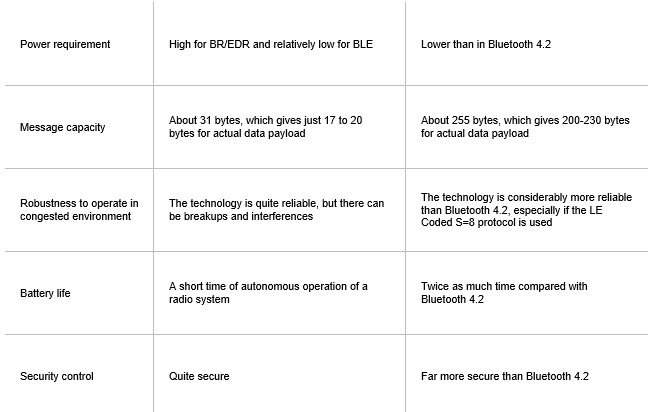 Since its inception in December of 2006, the Bluetooth 5.0 specification has become more convenient and advanced due to two updates — Bluetooth 5.1 (2019) and Bluetooth 5.2 (2020). The greatest improvement is the LE Audio feature, which allows transmitting a high-quality audio signal via BLE. Also, LE Audio provides hearing-impaired people with better sound quality.

Here is a review of improvements and features, which are added to new versions Bluetooth 5.1 and 5.2.

Due to improvements in the Generic Attribute profile and update of ATT, it became possible to implement the enhanced attribute protocol (EATT). It supports the constant encryption, parallel transactions, L2CAP mode of secure flow control and ATT (MTU) change during the connection.

Among other things, it means the possibility to reduce the cut-through delay when transmitting a signal between devices.

After the update to the 5.2 version of Bluetooth, the LE Power control appeared. It makes it possible to optimize the power level of signal transmission between two connected devices to maintain the optimum level of the Bluetooth signal in terms of energy efficiency and quality. In practice, this means that your smartphone will be able to change the signal power depending on the distance to the speaker: if it’s close – the phone gives a faint signal and saves energy; if it’s far – strong signal but increased energy consumption.

In Bluetooth 5.2, a new feature of audio transmission via LE Isochronous Channels was added. A special feature of isochronous channels is a lack of data retransmission in case of errors. Damaged packets are just discarded, which gives the opportunity to play audio via Bluetooth in real time on low-energy wireless devices. Besides, the functionality of LE Isochronous Channels allows transmitting data time-based not to one but to several wireless devices that support Bluetooth 5.2.

Here are examples of things that you can implement with the help of this technology: 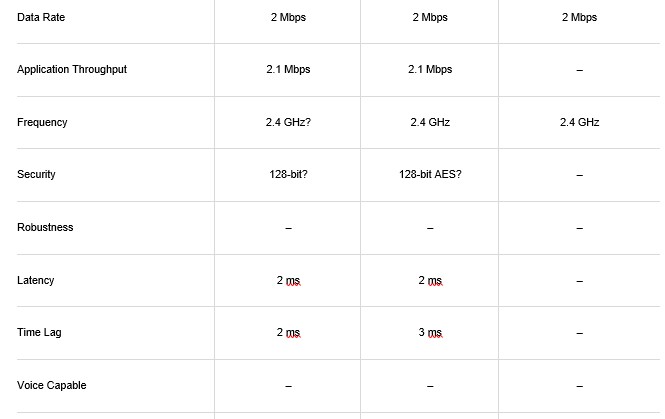 Merehead does professional development of bluetooth 5.0 overview. If you have questions, contact us for a free consultation.

Merehead review. Vleppo is a startup, digital asset exchange platform based on the Komodo blockchain protocol.
Category: Other 01/19/2023
Top Difference Between Bluetooth 4.2 and Bluetooth 5.0
Bluetooth for long has been the well-known wireless technology that is used today in almost all electronic devices. Almost every year there are more and more modernized versions of this technology, its development does not stand still. Despite this, with the increasing demand for devices based on IoT, the user wants to get newer and more advanced Bluetooth features. 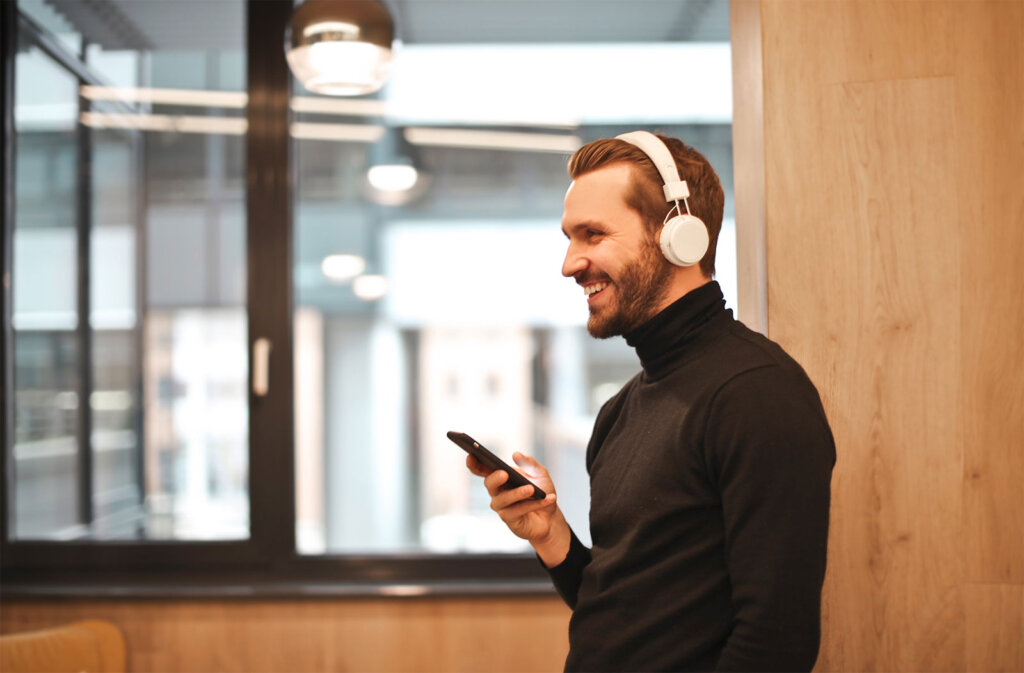