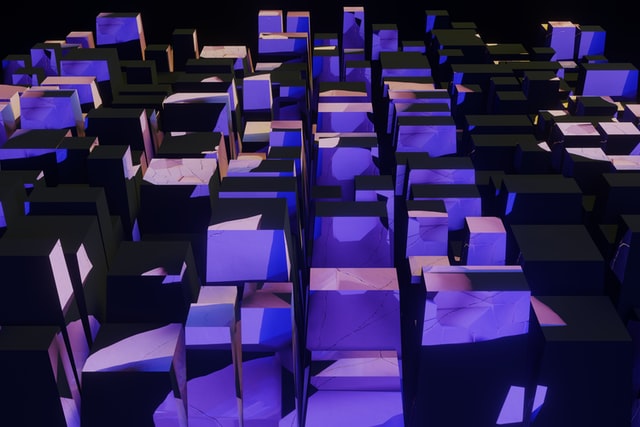 How to Develop a WEB3 Mobile Application?

Write to Yuri
Merehead / Blog / Web 3.0 / How to Develop a WEB3 Mobile Application?
Are there any questions?
Yuri Musienko
Write to the author

This article will give instructions on how to develop a WEB3 application. It will provide examples and detail on defining the project’s targets, preparing technical documentation, determining the functions, designing the UX/UI interface, and selecting the technology stack. Also, it will touch upon what is a WEB3 application and its difference from typical ones.


What is a WEB3 application?

WEB3 (Web 3.0) is a general term for various technologies that will significantly change the internet in the following ten years. It is expected that the WEB3 Internet applications will be decentralized and will use virtual and augmented reality. Also, it will understand the communication on the internet. In other words, 2D websites and texts will become three-dimensional, the search engines will give more relevant results, and the Internet users will have the power instead of the national corporations.

WEB3 applications are pieces of software that use one of the WEB3 technologies, i.e., blockchain for decentralization, artificial intelligence, neural learning, Big Data, VR/AR, dimensional interfaces, and distributed computing.

How does a WEB3 application function?

WEB3 application architecture is significantly different from WEB2 applications. For example, Medium is a website that allows sharing content or interacting (liking, sharing, commenting)  with other users' content. As a WEB2 application, Medium might seem to be a straightforward resource, yet the architecture involves many technologies: Having all this information, you will have a picture of how a WEB2 application functions. In our case, you see how Medium functions when you write or publish posts and comments. 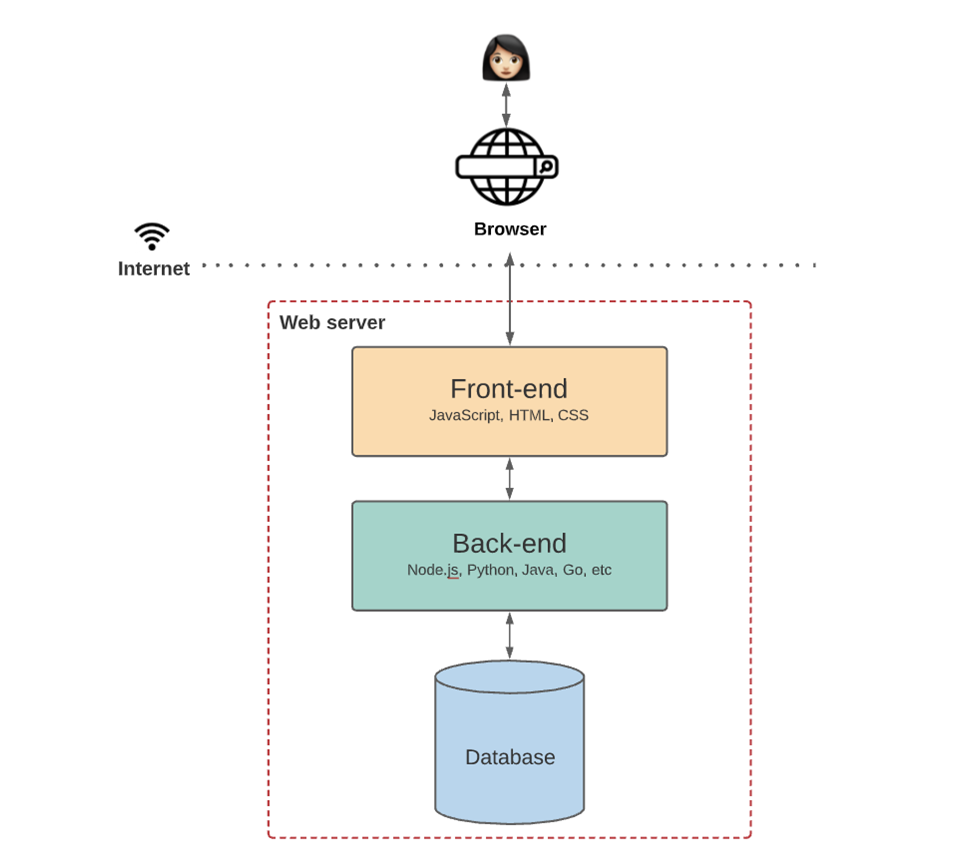 
It is a centralized type of architecture since the code is stored on an internal server, and data is in a database. Both the code and data are partially owned and controlled by the creator (owner) of the application, which causes issues with the security and privacy of data and the income received from it.

Unlike WEB2 applications like Medium, Facebook, Microsoft Word, WhatsApp, Netflix, or PayPal, WEB3 applications do not have a centralized server or a centralized database that stores information about the users and application. Instead, the technology employs a blockchain for crowdsourcing the public server, which the P2P anonymous nodes support (anonymous internet users). 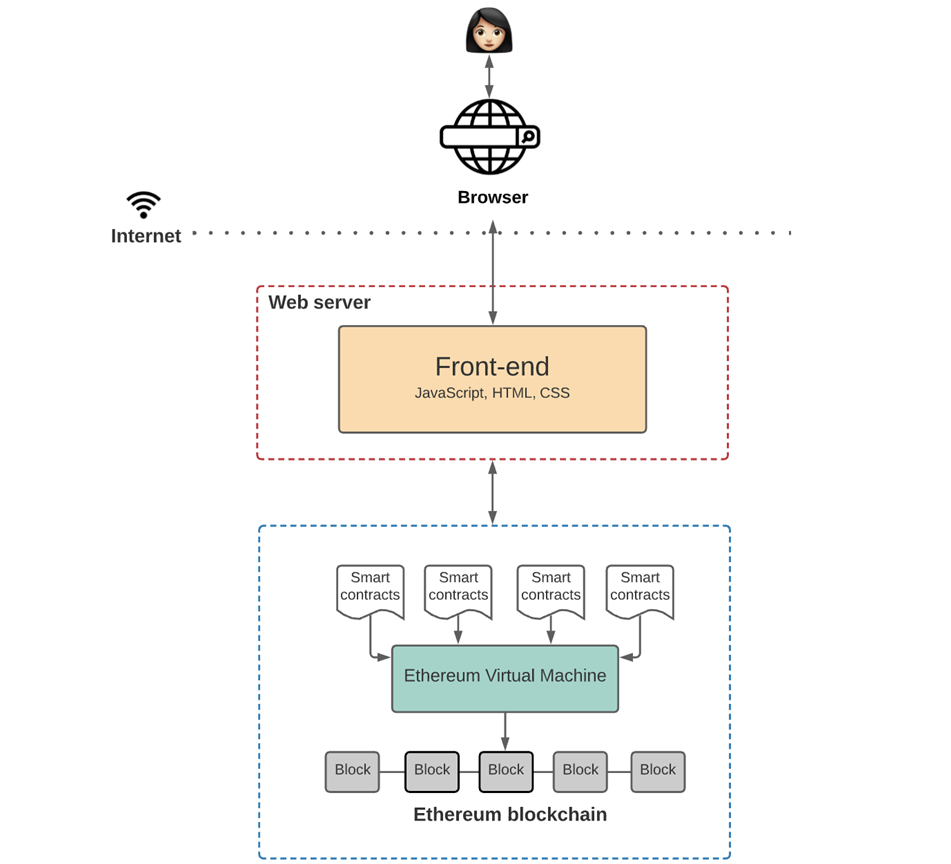 
This example illustrates the changes in the backend of the Web3 application. Do you wonder what happens to the frontend? At this stage, it does not have significant differences, yet in the future, it will change. Virtual and augmented reality interfaces will replace the graphical user interfaces (GUI) that we are used to seeing now. We discussed it in the article about Metaverse and related solutions developed.


How to create a WEB3 mobile application?

Developing a WEB3 solution requires custom development since it is the only way to provide decent security and reliability for your product. Furthermore, an experienced development team with high expertise in cybersecurity must take over the assignment, like Merehead. Since 2015 we have worked on Blockchain, DeFi, NFT, and VR/AR projects.

Any IT-startup development, including WEB3 mobile applications, starts with defining the idea of your project. At this stage, you and the development team meet online or offline to clarify all details of the future WEB3 solution, including the business aims you want to reach and the requirements for the design and functionality.

As a result of this stage, you must have the following:

Preferably, you prepare the descriptions and drafts before contacting the developers. However, if you do not do it, since developing an application is a new experience for you, it is not a big issue. An excellent developer will help you define by asking the right questions and providing examples.

Furthermore, the initial stage requires documents from the development team that we stated below: 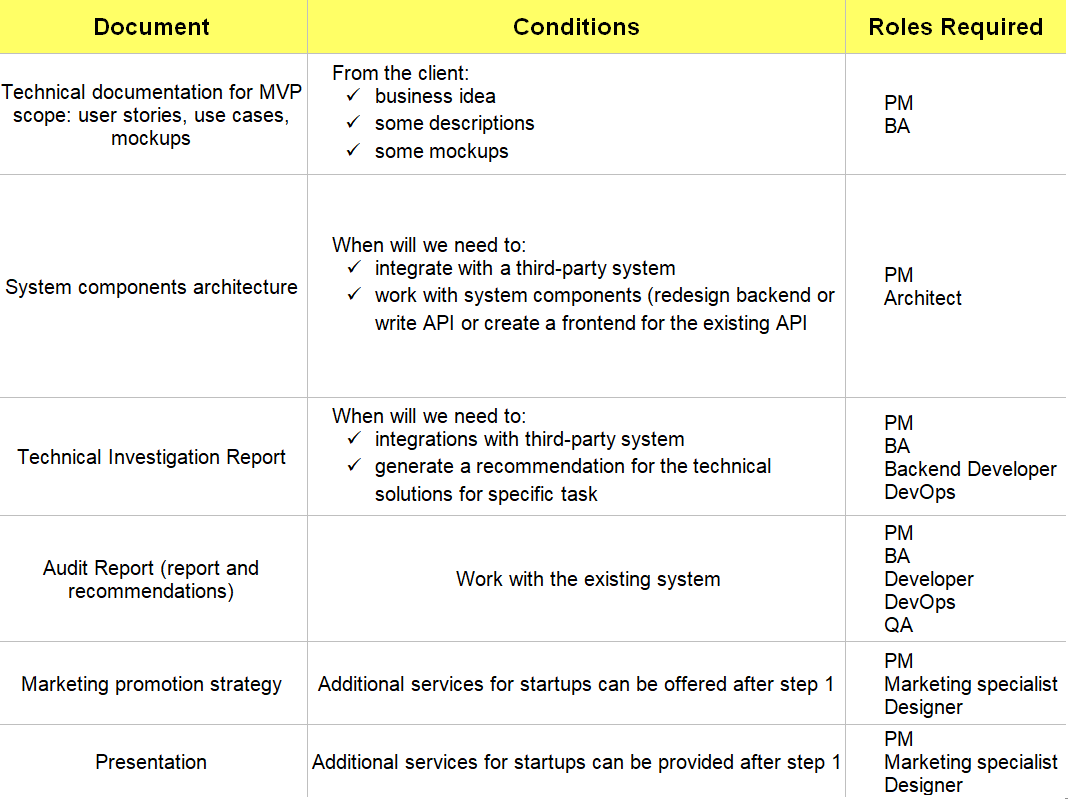 The second stage of a mobile application with WEB3 solutions involves creating a software document or technical specification. It is a development manual for the upcoming product that explains the business logic, including everything from defining the technologies employed to deadlines, budget, and even risks.

When the technical documentation is ready, the development team requires the client to approve it, and then they estimate the project's budget. When everything is agreed upon, the developer will conduct a functional decomposition, split user streams into tabs and functions, define their priorities, and create a project development plan. The plan will determine the tasks as prime (those which must be implemented in MVP) and secondary, which can be added after creating the MVP or even after the release and deployment of the mobile application.

Developing the WEB3 solution prototype is one of the most crucial development stages since the interface design defines the entire project's success. If the users do not like the interface or find it complicated and confusing, they will delete the application and never use your product. Also, they might leave negative feedback.

To avoid it, your development team must study the competitors and the target audience to understand the tastes and requirements of the users and implement it according to the technical documentation of the project and trends in design. Typically, the process takes three stages.

The application prototype developed in the former step will help the UX/UI designers create each tab's design, agree on it with the client, and test it on a focus group representing the target audience. As a result, the client will receive: Depending on the difficulty of developing your design, the process will take one week to three months. The design will take a year or even more if it is a WEB3 video game or a virtual space for the metaverse.

When the design development is ready, you will have:

Step 5: initiate the development of the application

There are several scenarios for this stage. First, you might start agreeing on the concept, namely developing the minimum viable product (MVP) that will prove that your idea functions and there is demand. This is a good solution for clients who want to check their ideas' perspectives on a low budget and within a short time.

Second, you can start developing the complete WEB3 application that has all functions, integrations, and design solutions. This is a solution for product launches in a competitive market with product analogs. It requires a quality product and details equal to or better than the competitors. This is the only way to attract users.

Despite your choice, the developers of the WEB3 application will need to develop the following:

Frontend. This is the part of your WEB3 solution which the user will interact with. For instance, for a cryptocurrency wallet, the developers use the following technologies and development tools (technology stack):

Backend. This part is responsible for the inner logic of the application. It connects the interface with the data access level. Developing the backend for a cryptocurrency wallet requires

Quality assurance is an important step at every stage of development for a smooth product launch, especially in the case of creating applications that handle money and business user data. Testers and QA specialists use manual and automated testing to check various vulnerabilities. Typically, these tests are as follows:

When the development of a WEB3 mobile app is complete, it's time to deploy it to the cloud and publish it to the Apple App Store and Google Play. But before that, you need to make sure that your mobile app meets the requirements of these app sites and prepare information about it.

Here is the publishing process for these stores: 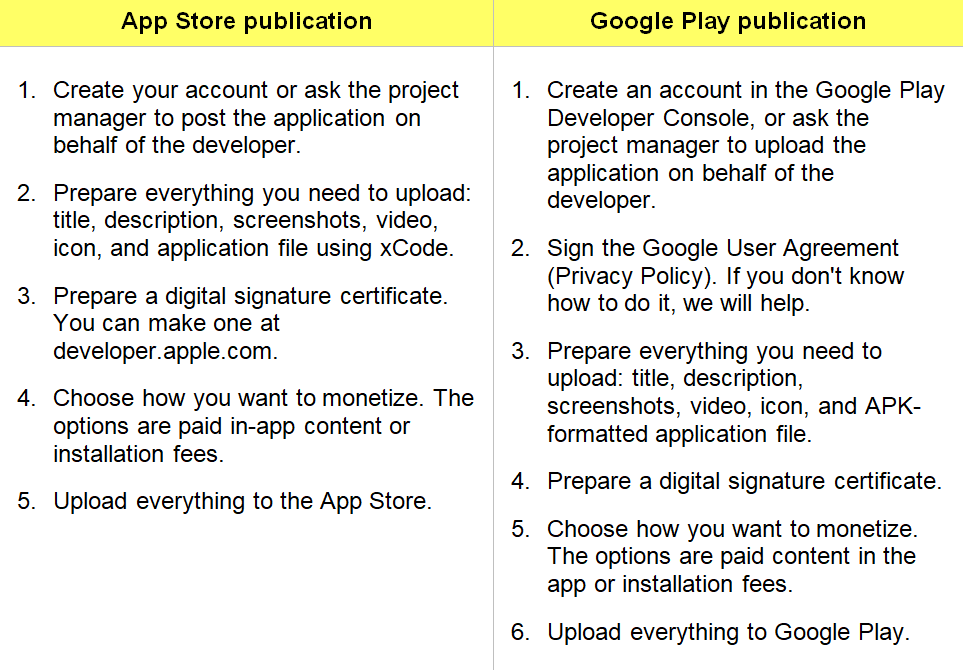 Post-launch support is not mandatory. But it is strictly recommended if you intend to improve and develop your project. You can set up the support work either through an internal team or by agreeing with your application developer. However, the latter option is not always possible because the developers can be transferred to work on the other projects. Therefore, you need to agree on support in advance, and then the developers will either move to long-term work with your project or train a particular team in advance.

Post-launch support is not mandatory. But it is strictly recommended if you intend to improve and develop your project. You can set up the support work either through an internal team or by agreeing with your application developer. However, the latter option is not always possible because the developers can be transferred to work on the other projects. Therefore, you need to agree on support in advance, and then the developers will either move to long-term work with your project or train a particular team in advance.


The budget for a WEB3 solution development

The cost of implementing WEB3-solutions and other IT projects depends on their complexity and scale. Therefore, it is impossible to say in advance what the development budget of your specific mobile application should be. Here we will only give an approximate cost of cryptocurrency wallet development for the U.S., Western, and Eastern Europe. 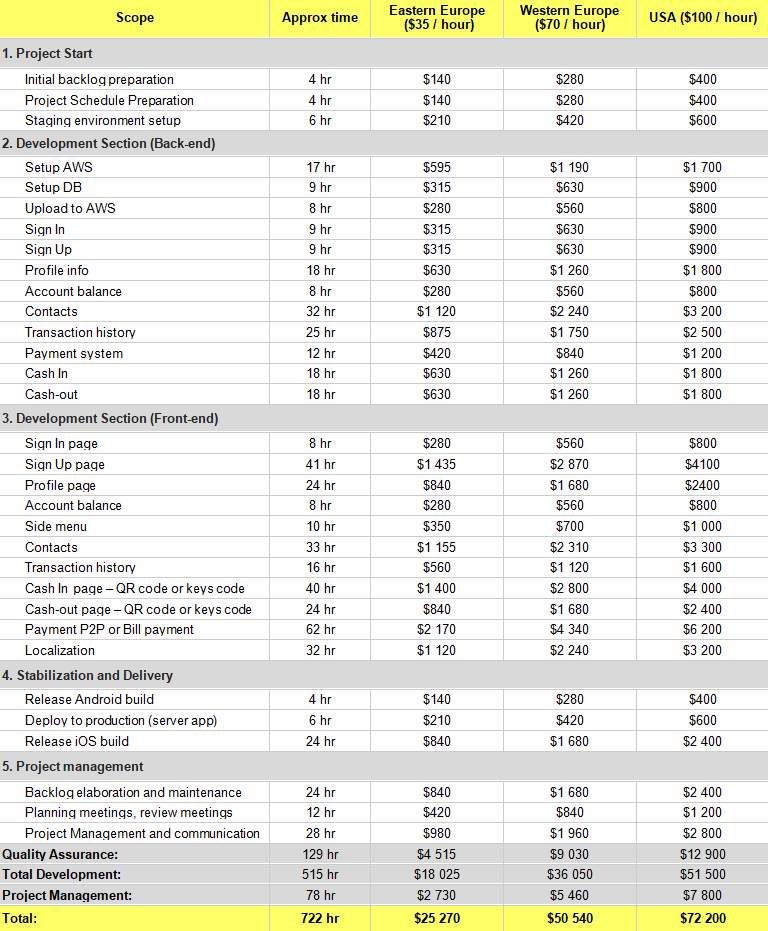 How to Develop a WEB3 Mobile Application? key takeaways:

Merehead does professional development of WEB3 mobile app development. If you have questions, contact us for a free consultation.

Merehead review. Vleppo is a startup, digital asset exchange platform based on the Komodo blockchain protocol.
Category: Web 3.0 09/15/2022
WEB3 Developers | WEB3 Development Company
In the next ten years, artificial intelligence, blockchain, IoT, VR/AR, 5G, and the digital economy will allow us to enter a new era of Internet development. Web3 is the era when machines understand the text meaning; users can watch a Netflix series and play the lead part there; the distributed systems will take the governance on the Internet to replace the corporations. Those companies that are the first to accept the changes will be able to create their WEB3 solutions that will become the new Google, Apple, Facebook, Uber, Airbnb, or another phenomenon. 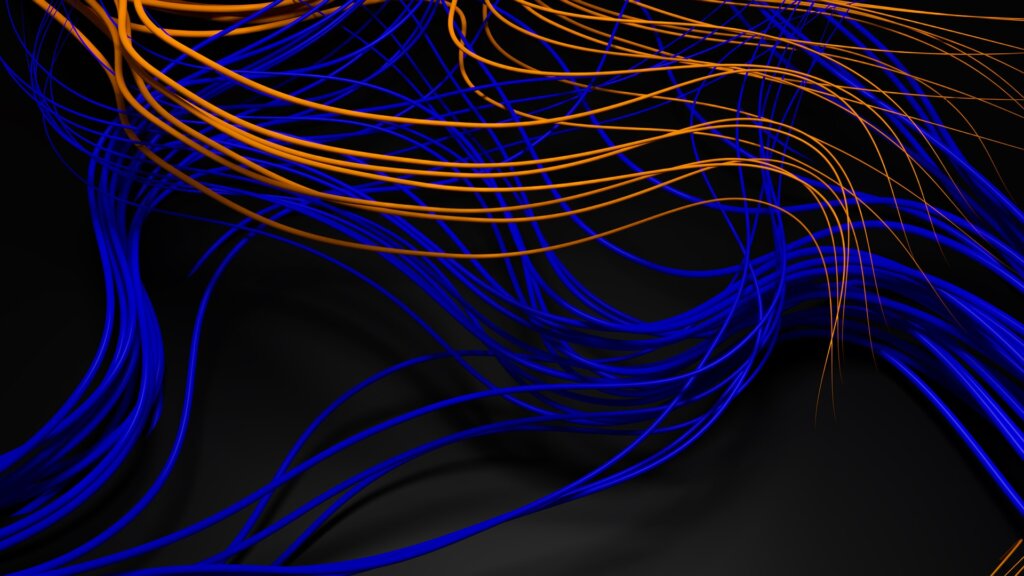 Category: Web 3.0 09/09/2022
How to Create a WEB3 Platform? Roadmap of WEB3 Development
The world is rapidly moving towards the next big thing in technology — Web 3.0. It is a new age of the Internet, where users will manage their data, AI will process the queries like humans, and the information will be stored and processed in a distributed network. It is not a futuristic idea, and it is happening right now. There are more and more Web3 projects available. This article will tell you how to launch your Web3 project to take advantage of this trend and get max benefits for your business. 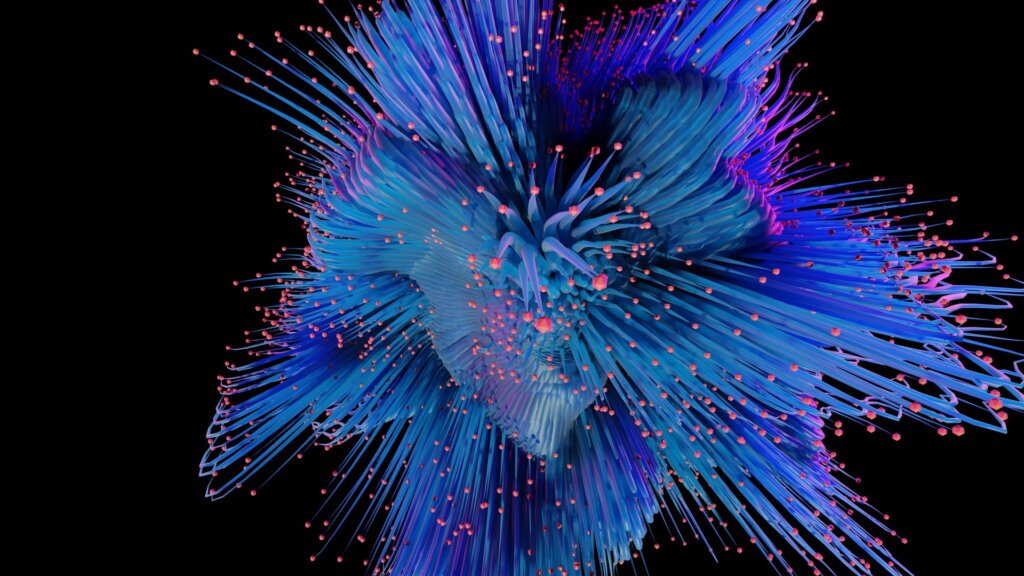 Category: Web 3.0 09/29/2022
WEB3 Cryptocurrency Wallet Development — What Trends you Shout Know?
Web3-wallet development doesn't stand still. Every year there are new technologies and practices that are making these applications better and better. In this article we will talk about such technologies and practices - 10 trends you need to know and consider when developing your WEB3 Wallet for cryptocurrency, smart contracts, Dapps, DeFi, GameFi and NFT. 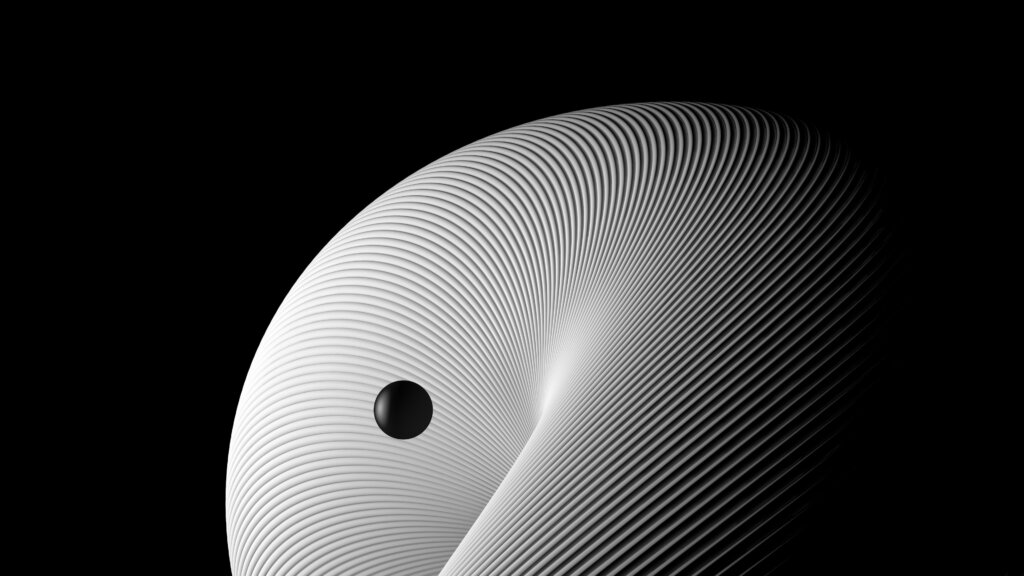