Professional development of your idea

Perfect solution for your business

Smart Contract Development Company. Our team uses all methods and capabilities to achieve the best result.

We use the deep experience of UI / UX design. Our designers create mockups with WoW effects.

Our team is not standing still. We regularly improve skills. You can not get high results without a good team.

All our experience and best practices are used to implement projects with a consistently high level of projects.

We provide a warranty period. If you have any issues, we will be glad to fix them for free.

CoinBird is a cryptocurrency exchange platform. The platform is developed on the basis of a modular system and makes it possible to quickly scale a project. The system has a high level of security and a high-performance core.

The Merehead team has implemented the personal data management function - AML/KYC. We believe that security should be in the first place, thus our developers have added the ability to automatically transfer funds to a cold wallet and verify the withdrawal function. 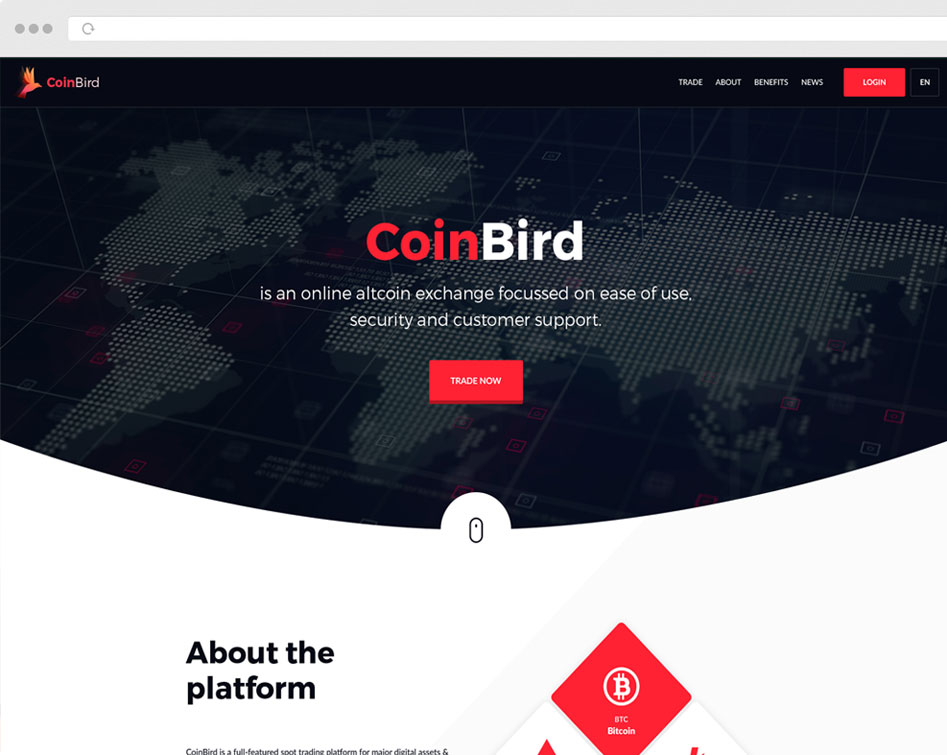 What Our Clients Say

Excellent work!! They built the platform to our satisfaction and were very creative in taking what was simply a series of wireframes and transforming it into a living and breathing e-commerce platform.

If you want to have a peace of mind that the project will be completed with all the features you wanted I would recommend using this team.

Merehead is very pleasant to work with, I appreciate Eugene being always available and communicate really well throughout the whole process. If there was something we'd missed he'd just help out and put an end to it.

Feedback from our customers

We in the press

The Benefits Of Applying Blockchain Technology In Any Industry

Cryptoexchange - centralized or not?

Cryptocurrency Mining: What Is It and How Does It Work?

Do you have questions? Long writing? Talk to a human.

Since 2015 we help to bring your idea to the quality product.

Through personal machines, we deploy a draft smart contract on test net and make quality assurance. After complete testing and alterations, we deploy on the main net.

All details go then to tech development team. To design the mechanism of interactions between smart contracts and front-end/back-end system.

Deployment on test net, validation of the system. Improvements.

Blockchain is taking over the world market faster and faster. Its part became smart contracts, which allow to fulfill the obligations without any intermediaries. They provide a higher level of security, are autonomous and save company money.

Working with the blockchain environment, Merehead creates smart contracts to automate transactions, increase trust and eliminate third-party interference across multiple platforms. Our customized solutions will keep you at the forefront of the technology revolution.

The first and main step is planning the architecture of the smart contract in STO software development. In order to prepare the project, our team:

• defines the objectives of the contract;
• notes the part of the application that should be implemented on the blockchain;
• divides it into components - contracts that will carry out subtasks.

The main task of this stage is to radically simplify the development process. The Merehead team draws the base path that will be followed in the coding process. Thus, we can significantly reduce development time, as well as avoid unnecessary actions.

The next step is to document the development itself. What for? It simplifies our and your work with the contract. First of all, the documentation helps you quickly understand all the intricacies of the code. Also, this step allows you to clearly distinguish between areas of responsibility. In the end, only carefully written data can be checked for completeness.

After that, we deploy the code writing environment. The set of tools depends on the platform that will underlay the smart contract. So, in the case of Ethereum, we use Remix (an editor for writing and compiling code), Myetherwallet (an application creation environment), Ganache (a program for launching a private blockchain, which is necessary for modeling and testing a contract).

Next, we go directly to writing code. After that, our team conducts testing and debugging. As soon as no errors are detected in the code, you will get full access to the smart contract and documentation.

How do we ensure safety

Use of relevant languages. One of the mistakes of novice developers is the wrong choice of programming language. As a rule, they simply do not attach any importance to this. The Merehead team uses Solidity, C ++, or Rust (depending on the platform that is taken as the basis of the smart contract). They are considered the most effective in the development of smart contracts.

Testing. When verifying the smart contract code, we use both unit testing to cover the main functions and the release of the contract in the test network. Thus we find all critical errors.

When conducting audits of various smart contracts development, we often found the same errors. Thanks to this, our team has taken a number of actions that must be followed to write high-quality and reliable code.

Work with proven libraries. With the growing popularity of blockchain technology, more and more libraries are appearing. The problem with many developers is that he is trying to create his own set of configurations and tools. Our team does not reinvent the wheel and uses only proven libraries from the respective platforms.
Using safe arithmetic. Operations on integers can overflow, causing errors that the user will not be aware of. That is why, we check the “math” of our contracts several times. In addition, we use appropriate libraries for integers (for example, SafeMath for Solidity) to avoid overflow.

Checking return values. Returned values are often signs of failure. Testing them is one of the most important aspects of defensive programming, especially when working with external libraries. When writing smart contracts, programming languages provide many exceptions to avoid this kind of problem. However, each of them behaves differently and can lead to an error. Therefore, we use only previously tested commands for writing code. This ensures the correct operation of the smart contract.

Why smart contracts are necessary for business

The nature of smart contracts makes them powerful tools for a variety of business applications. As more and more companies continue to accept smart contracts, they reap both direct and indirect benefits. Soon, each commercial transaction requiring a contract may be based on the rules of smart contracts.

Versatility. Using a few lines of code, enterprises will be able to process various activities, including financing purchase orders. In addition, the contract code is executed decentrally and globally. In other words, smart contracts operate regardless of geographic boundaries. In this way, they will help scale any business.

Automation. One of the obstacles to speeding up business processes is the need to manually confirm transactions. Thanks to smart contracts, this process is automated, since the necessary data is already in the system. Thus, enterprises can trust the algorithm and not waste time constantly checking the actions of the other party to the contract.

Accuracy. A smart contract is pre-written and tested code. Accordingly, everything is predetermined in it and there can be no errors. That’s why smart contracts are a more reliable way to complete transactions.
Trust. To negotiate is often needed a mediator, who can monitor the fulfillment of obligations. A smart contract, in fact, will be the intermediary. But it works more efficiently, which saves time and money for business development and ICO marketing.

Take your step into the future

Many companies have already completely abandoned their oral or written contracts in favor of smart contracts. The result is an acceleration of business processes, the development of infrastructure and the coverage of new areas of activity.